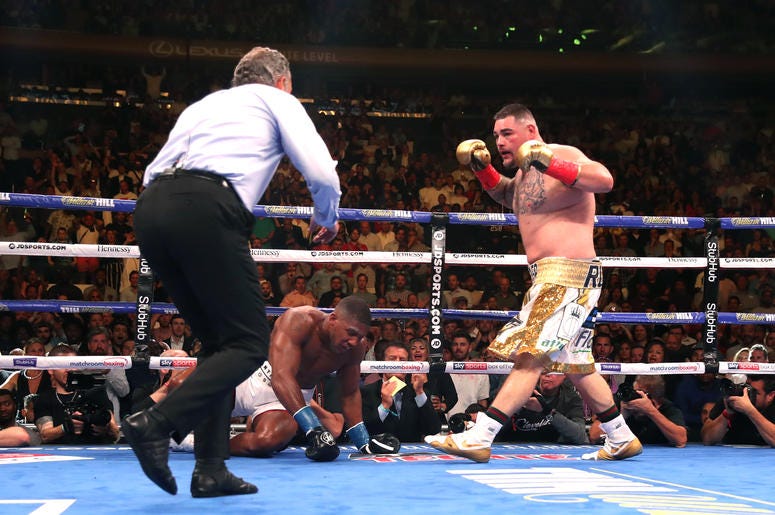 Andy Ruiz stunned the boxing world with a seventh-round knockout of Anthony Joshua on Saturday, leading many to call the match one of the greatest upsets in heavyweight history.

Showtime's Al Bernstein dropped by to provide perspective on the thrilling bout.

"This is not Tyson-Douglas," Bernstein said Monday on "Ferrall on the Bench," referring to the 1990 stunner. "It was more like Hasim Rahman beating Lennox Lewis. Andy Ruiz, contrary to what many in the mainstream press are saying, is not some fat guy who pulled in from the bar. He was an amateur champion, he's got one loss as a professional -- that was a disputed loss to Joseph Parker -- and Andy Ruiz knows how to fight.

"Everybody has seen potential in Andy Ruiz all along," Bernstein continued. "Part of it was Joshua not performing as well as he would like in that fight -- there's no question it was a subpar performance -- but a lot of it was also Andy Ruiz doing well. So it was an upset, a big upset on par with Rahman and Lewis, but not on the level of Tyson-Douglas."

Joshua was incredibly gracious in defeat -- perhaps too much so. Many wonder how seriously he took Ruiz.

"It's possible he was complacent," Bernstein said. "There's no way to say for sure how hard he worked. But Eddie Hearn, his promoter, said, 'I'd like to stand here and tell you it was a bad camp, but I can't.'"

On Tuesday, Hearn said Joshua would book a rematch with Ruiz for late 2019.

After meetings with AJ, Rob Mc and the management team in NY, we have today triggered the contracted rematch clause with Andy Ruiz Jnr. The fight will take place in Nov/Dec at a venue to be confirmed shortly.

"Ruiz would be paid a lot for a rematch," Bernstein said. "It would be a life-changing payday."