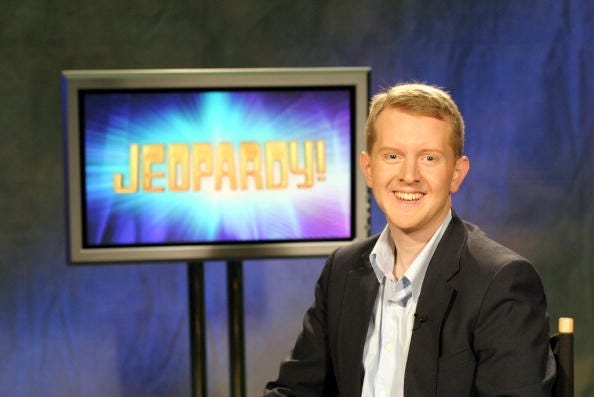 Ken Jennings sleeps a little easier these days knowing his place as “Jeopardy!” record-holder for highest earnings and longest winning streak is no longer being challenged by James Holzhauer. But getting to this moment of relief didn’t come without his coping mechanisms. Turns out, Jennings has a Holzhauer voodoo doll.

In an interview with Access, Jennings revealed that while outwardly, he was rooting for a Holzhauer takeover of his title, he’s now relieved that his standing remains untouchable.

The voodoo doll came into play as Holzhauer inched closer and closer to Jennings’s record. “I had a little James voodoo doll at home, and I’d poke him in the brain with this pin,” Jennings reveals.

But it was genuinely a joy for Jennings to watch such a stellar “Jeopardy!” contestant.

On top of watching someone encroach on his crown, Jennings can’t help but believe that a higher power had something to do with this. “God is okay with somebody coming within one day of my record,” he says, but the title will remain his own.

Now, Jennings is contemplating the possibility of playing a game of “Jeopardy!” alongside Holzhauer in the future. “You know, I would love to do it, but it’s been 15 years since I was in 'Jeopardy!' shape,” he says.

Fans can’t help but reel over the possibility of seeing these two record-breakers in a stand-off.