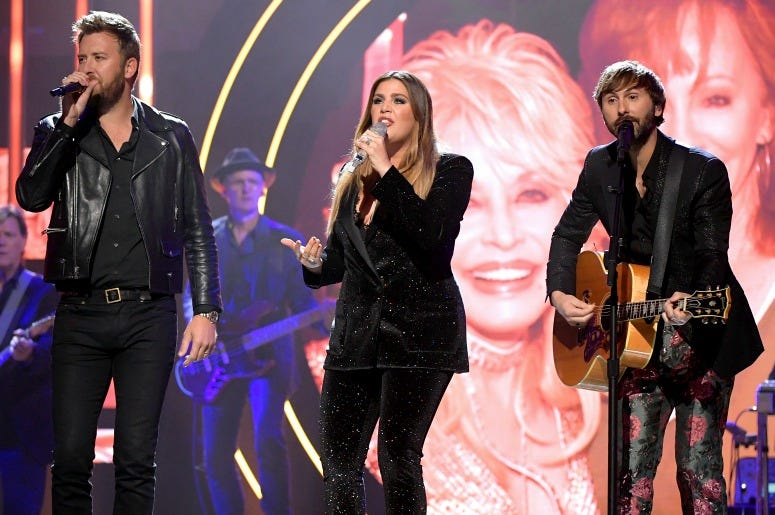 Things are good for Lady Antebellum this week, as they're perched on the precipice of another tour and another No. 1 hit with "What If I Never Get Over You."

"We would be absolutely over the moon, and we are just really so excited about new music, about this song, how it's connected with everybody, and the tour coming up," Hillary Scott tells RADIO.COM's WYCD in Detroit. "We're just so excited to have Jake Owen and Maddie & Tae on with us. And just bringing some more songs off of 'Ocean' to life onstage. But honestly just like thank you so much for your support of this song."

Scott is heading out with band members Dave Haywood and Charles Kelley on a tour with Jake Owen, who recently had an accident and broke his wrist while teaching his daughter to ride a skateboard. He says he'll be back in form by the time their tour kicks off in four months.

What is he more concerned about, getting in shape for the tour or for his stint playing golf at Pebble Beach in February?

"I texted him yesterday because I saw that too," Kelley says. "I was like 'Oh man, I know the first thing on his mind is, 'is my wrist going to be ready for Pebble Beach.' And he said he's going to do everything he can to accelerate the healing of it. I was like, 'It might be good for you. You might be up there on some pain pills... and play really great."

For seven-time GRAMMY-winning trio Lady Antebellum, their Ocean 2020 Tour launches May 21 in Albuquerque, NM at the Isleta Amphitheater. The tour is named after their No. 1 selling album Ocean. Jake Owen and Maddie & Tae will open as they take the tour nationwide this summer. You can find the full list of dates here.