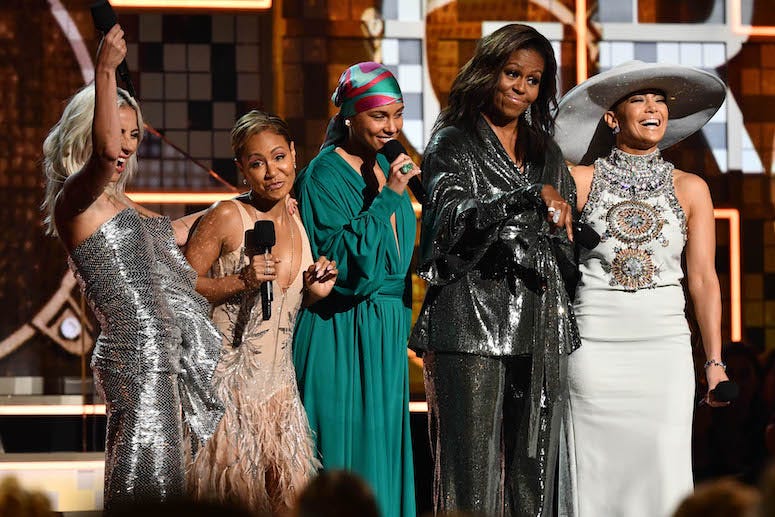 Last night at the 2019 GRAMMYs there were plenty of exciting firsts: Childish Gambino’s win for song and record of the year marked the first time a hip hop song won those categories. Cardi B became the first solo woman to win rap album of the year. Dolly Parton became the first country singer to be named the MusiCares Person of the Year. But viewers didn’t have to wait long for the moment that brought the house down. It happened during Alicia Keys opening monologue.

Michelle Obama made a surprise appearance, joining Keys, Lady Gaga, Jennifer Lopez and Jada Pinkett Smith on stage to share the ways music transformed all their lives. She could barely get through her first sentence before the crowd of music superstars interrupted her with a deafening standing ovation. Eventually she managed to quiet them down by reminding them that, “we have a show to do.”

And she used her time to speak to the universality of music and its power to unify people.  “From the Motown records I wore out on the Southside to the who run the world songs that fueled me through the last decade, music has always helped me tell my story…Music helps us share ourselves—our dignity, our sorrows, our hopes our joys.”

Right after the show she praised Keys, tweeting, “A big part of friendship is showing up for your girls—that’s why I was thrilled to be there for the one and only Alicia Keys…”

A big part of friendship is showing up for your girls—that’s why I was thrilled to be there for the one and only @aliciakeys at the #GRAMMYs. She is one of the most genuine and thoughtful people I know—there’s no one better to help us all celebrate the unifying power of music! pic.twitter.com/8cMhTmsClA

It’s not the first time Michelle Obama and the GRAMMYs have intersected. In 2013 her book American Grown was nominated for best spoken word album. But this was the first time she showed up to the party. Keys seemed eager to hold on to this moment with the former first lady as long as she could, standing arm in arm with her on stage. Surrounded by a group of such powerful women she took a second to reflect on that, closing with a rhetorical question: “Who run the world?”

Last night it was Alicia Keys and Michelle Obama.