As Major League Baseball starts to dust the cobwebs off the bats, balls and gloves, inching closer to a real season, our two local clubs have authentic aces to hurl the first pitch. In fact, it's hard to remember the last time the Yanks and Mets had the best starting pitcher in each league. And if you had to pick one —Gerrit Cole or Jacob deGrom — for the next five years, whom would you take?

This is practically a coin flip. Call it two winners or no losers. Like picking between Ginger and Maryanne, or Chamberlain and Russell, or Pearl Jam and Nirvana.

Indeed, Cole and deGrom are so sublime, it's almost impossible to pick one, a choice that may come down to age more than wage or ability. Cole, of course, has yet to toss his first pitch in pinstripes in a game that matters, while deGrom has established himself as the Mets' best pitcher since Doc Gooden in the mid-'80s.

Cole has not won a Cy Young Award, though he could easily have earned one last year. But despite having a better winning percentage (.800), more strikeouts (326), and lower ERA (2.50), Cole lost the vote to Astros teammate Justin Verlander. Meanwhile, deGrom cruised to his second-straight NL Cy Young Award in 2019. Even though deGrom hasn't won more than 15 games in a season, his dominance has been just as evident as Cole's 20-5 mark in 2019.

Cole has been a starter for seven MLB seasons, while deGrom has been around for six. Cole has pitched about 90 more career innings than deGrom, or nine starts that average six innings. Cole's career record is 94-52, while deGrom sports a 66-49 mark. Much of that disparity comes from the fact that Cole pitched for better teams over his career. 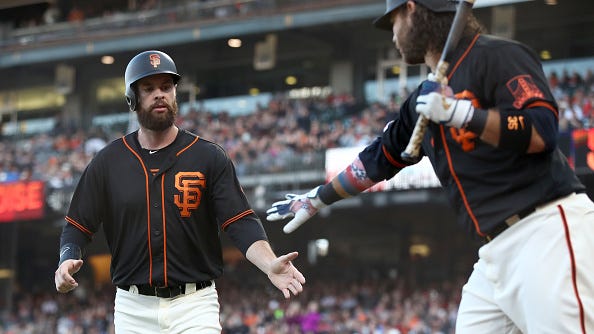 Coin flip stuff. Any lead by either pitcher is either microscopic or can be explained by the one-year gap in experience.

It says here that deGrom has had the much more taxing job, pitching on the moribund Mets, losing brilliant starts, and watching the bullpen melt like a sundae in July. They traded for the AL's best closer, Edwin Diaz, and then he contracted the Steve Blass disease. DeGrom won the last two NL Cy Young Awards even though he won 10 and 11 games, respectively, because the Mets don't support their ace with rallies and runs. Meanwhile, Cole has pitched for a juggernaut in Houston the last two years, winning 35 games and having his mail forwarded to October. Heck, even his time in Pittsburgh was fruitful, as the Pirates reached the playoffs in his first three seasons (2013-'15). DeGrom barely knows what .500 feels like. So clearly deGrom has done more with less.

Yet the pick here is Gerrit Cole - largely because he's 29 and deGrom is 31. Now that Cole signed his King Farouk deal with the Yankees, he will continue to rack up way more wins than deGrom will. But the big difference - if not the only difference - over the next five years is Cole will likely have more blazing fastballs left in his arm.

In today's toxic culture, it always feels like we must dismiss one person when we desire the other. Jacob deGrom has been as good over the last two years as any pitcher in recent memory. He just happened to hit his pitching prime a little late. Both should have stellar seasons this summer - provided there is one - and be two sparkling halves of a pitching rivalry for years to come.