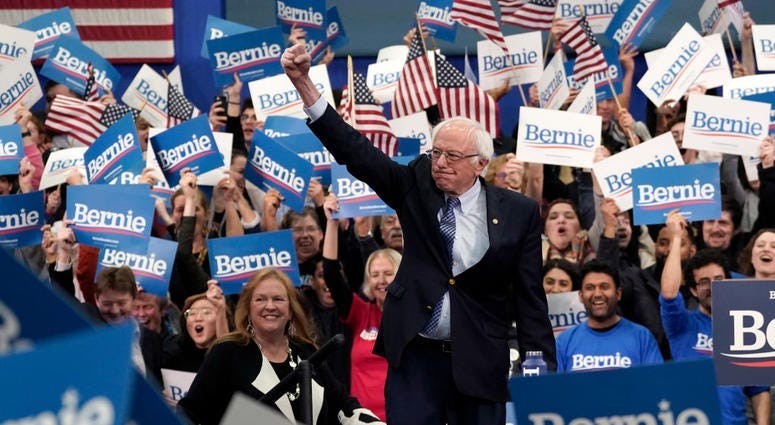 After a tight race, Sanders came out on top with over 69,000 votes in the first-in-the-nation Democratic primary. In second place was former South Bend, Indiana Mayor Pete Buttigieg followed by Minnesota Sen. Amy Klobuchar.

Shortly after a number of outlets began to call the race, Sanders took to Twitter to declare his victory.

We just won the New Hampshire primary. What we have done together here is nothing short of the beginning of a political revolution. Join us live at our primary night rally in Manchester! https://t.co/OmKd1xIumv

"We are going to unite together and defeat the most dangerous president in the modern history of this country," he told a cheering crowd of supporters in Manchester. "The reason I believe we are going to win is that we have an unprecedented grassroots movement from coast to coast of millions of people. The reason that we are going to win is that we are putting together an unprecedented multi-generational, multi-racial political movement. And this is a movement from coast to coast, which is demanding that we finally have an economy and a government that works for all of us, not wealthy campaign contributors."

CBS News estimated that Sanders would walk away with at least 8 delegates, Buttigieg at least 7, and Klobuchar at least 4.

JUST IN: CBS News estimates the three leaders in New Hampshire will walk away with delegates tonight. Sanders will have at least 8, Buttigieg at least 7, and Klobuchar at least 4. https://t.co/Y8wAV74KxV pic.twitter.com/K0U6tB02Tk

Numbers showed a three-way race, with Sanders in the lead followed by Buttigieg and Klobuchar, who was surging in the race following a strong showing in the most recent debate.

"This is a state that Bernie Sanders won last time over Hillary Clinton," Dr. Lee M. Miringoff, director of the Marist College Institute for Public Opinion, said. "What we're seeing is people like Peter Buttigieg and tonight Amy Klobuchar as clearly gotten into the top tier she's broken away from the pack where Elizabeth Warren and former Vice President Joe Biden are dropping almost out of sight."

It appears to have been a poor showing for Biden — who left New Hampshire for South Carolina before polls closed — and Warren, with neither of them on pace to get delegates.

Warren spoke to supporters earlier, saying she plans to keep the fight going with the help of everyday voters.

.@ewarren emphasizes unity with supporters: "We cannot afford to fall into factions. We can't afford to squander our collective power. We win when we come together." @KevRincon and @peterhaskell880 analyze her underperforming campaign. #NHPrimary2020 https://t.co/1YViQiKH5A pic.twitter.com/iiMTHJOxpx

The first votes were cast in Dixville Notch, New Hampshire, where residents often take part in a tradition of casting their votes at midnight. There was one confirmed vote for Buttigieg, one vote for Sanders and two write-in votes for Mike Bloomberg, who received an extra vote from a Republican, even though he does not appear in the New Hampshire ballot.

A new Quinnipiac University national poll shows Bloomberg now just a couple of points behind Biden, whose support among Democrats and independents has plummeted in the past two weeks.

Meanwhile, Sanders leads the polls in New Hampshire and nationally while Klobuchar has also enjoyed a nice bump recently.

“Not just one, but two battleground tracker polls have Sen. Amy Klobuchar jumping into third place, and this is a post-debate bump. A lot of voters I speak with saw her on that debate stage on Friday and felt like she was the one to take on President Donald Trump. She's also trying to appeal to independents in New Hampshire," said CBS News 2020 campaign reporter Nicole Sganga.

Exit polling from CBS News found almost half of Democratic primary voters decided on the candidate in the last few days, with many saying the most recent debate was an important factor in making their choice.

Meanwhile, there seemed to be division among New Hampshire voters as to what kind of policies they want to adopt. About 40% say they want to return to Barack Obama’s policies, while 38% want to change to more liberal policies.

The most unifying factor seemed to be the desire to vote President Donald Trump out of office. More than 9 in 10 voters in the New Hampshire Democrats primary said they were unhappy with the Trump administration – including 81% who are angry.

Many also said they prefer a nominee who can beat President Trump, a sentiment that was often observed by WCBS 880’s Steve Burns on the road in the state.

President Donald Trump also made a stop in the Granite State on Monday night to rally supporters, and possibly sway some undecided Democrats to vote red.

During the rally, the president focused on his goals should he be elected again in 2020 and took time to criticize House Speaker Nancy Pelosi for ripping up her copy of the State of the Union speech last week.

The crowd responded with chants of “Lock her up.”