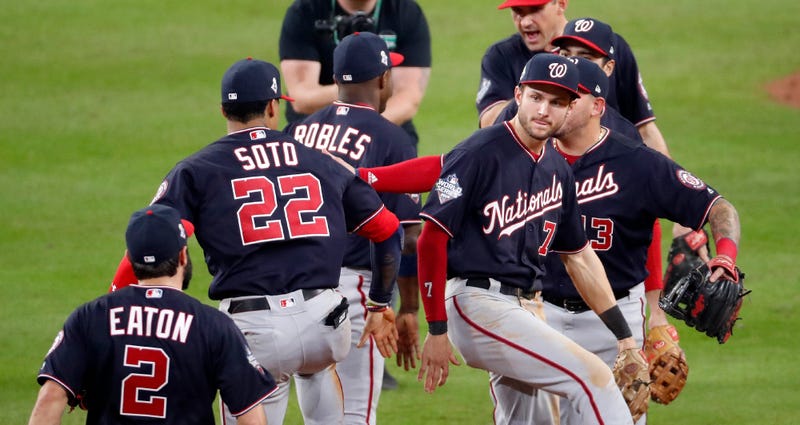 The Washington Nationals never blinked in their first game on the World Series stage.

On a night when the Nats hadn’t played in a week, Max Scherzer needed 26 pitches to get through the first inning, the Nats fell behind 2-0 on the road, and the bullpen gave up a late rally, it’s hard to believe that we’re talking about a win.

But that’s exactly what happened, thanks to an offensive performance from the past, present and future of the ballclub.

Elder statesman Ryan Zimmerman got things started in the top of the second inning, making Astros ace Gerrit Cole pay for a fastball over the middle of the plate. The solo home run matched the number of runs that Cole had given up through his first three 2019 postseason starts.

Two innings later, the youngster, Juan Soto, crushed his own solo home run, tying the game in emphatic fashion. It came off another quick adjustment for Soto, who does not turn 21 until Friday.

“In the first at-bat, I’m not going to lie, I was a little bit shaky in my legs,” he told reporters after the game. “I just had to control my emotions.

“Just take a deep breath and focus. It’s just the pitcher and me. Everybody around, I forget about. It’s just you and me...I just try to enjoy it.”

Soto had plenty to enjoy, following up on his home run with a two-run double in the top of the fifth inning, piling on after Adam Eaton’s RBI single helped them take the lead.

At that point, the Nats had a 5-2 lead and looked to be in the driver’s seat. Patrick Corbin entered to pitch a clean sixth inning, an assignment that should leave him available to start Game 4 on Saturday.

But then the wheels began to rattle, threatening to come off. Tanner Rainey got just one out in the seventh before pitching the Nats into a jam. Daniel Hudson bailed them out but left with just a one-run lead.

Enter Sean Doolittle, who had pitched his way through injury and out of the closer’s job by season’s end. He has largely given up the ninth inning but was called upon to get four outs in the highest-pressure situation of them all.

Maybe Dave Martinez knew Doolittle’s redemption moment was coming, or maybe he never had a choice. After using Hudson to stop the bleeding, it was Doolittle’s game to win or lose.

What ensued was an almost routine four outs, including a clean ninth inning. After a season with the worst bullpen, the Nats have now figured out the magic formula on the biggest stage.

Coming into the series, they knew they had to beat Cole and Justin Verlander at least once. After one game, Houston, the eagle has landed.