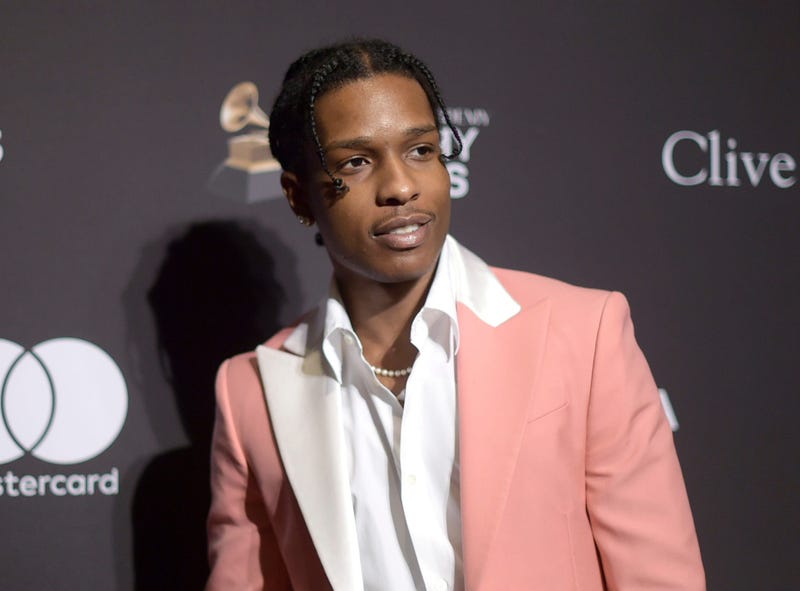 Photo credit FILE - This Feb. 9, 2019 file photo shows A$AP Rocky at Pre-Grammy Gala And Salute To Industry Icons in Beverly Hills, Calif. Prosecutors in Sweden are dropping the investigation of a man they say was involved in a fight with American rapper A$AP Rocky. The platinum-selling, Grammy-nominated artist whose real name is Rakim Mayers, has been behind bars since early this month as police investigate the fight in Stockholm.(Photo by Richard Shotwell/Invision/AP, File)
By 1010 WINS

STOCKHOLM (1010 WINS/AP) — Rapper A$AP Rocky and two other U.S. suspects have been freed from jail in Sweden until Aug. 14, when judges are expected to announce a verdict in the assault case against them, a Swedish court announced Friday.

It wasn't immediately clear from the decision by the Stockholm District Court whether the three individuals, all American citizens, would be able to leave the country, but President Donald Trump tweeted, following the decision, "A$AP Rocky released from prison and on his way home to the United States from Sweden. It was a Rocky Week, get home ASAP A$AP!"

A$AP Rocky released from prison and on his way home to the United States from Sweden. It was a Rocky Week, get home ASAP A$AP!

Prosecutors asked that the 30-year-old rapper, whose real name is Rakim Mayers, get a six-month sentence during closing arguments Friday. Mayers told the court he thought community service would be a proper punishment for him.

The development comes after a witness in the A$AP Rocky assault case revised her story from initial police reports, testifying in a Swedish court Friday that she didn't actually see the American rapper hitting a man with a bottle.

The young woman and her friend, testifying anonymously, were questioned via video link at Stockholm District Court.

Witness testimonies were the highlight of the third day of the trial where Mayers and two other suspects are accused by prosecutors of beating 19-year-old Mustafa Jafari on June 30. The rapper's bodyguard, identified as Timothy Leon Williams, also testified Friday.

Whether or not Jafari, who got into an argument with Mayers' entourage in Stockholm, was hit with parts or a whole bottle has become one of the key issues at the trial.

Both women who testified Friday maintained their previous statements to police that they saw Mayers and his partners beating and kicking Jafari.

But one of the women recanted what she witnessed with the bottle. She said she heard the bottle being crushed, though she couldn't say whether Mayers' entourage threw the bottle to the ground or hit Jafari with it.

"Everything happened very quickly. We were scared for our lives," the first woman told the court in Swedish. "He (Jafari) was bleeding. He showed his injuries on his hand. He also said he had a sore back."

Williams' testimony closely mirrored what Mayers told the court Thursday , adding that the situation was made more complicated due to the language barriers between the rapper's group and Jafari. His bodyguard said Friday he asked Jafari to "go away" when he approached the group a second time outside the fast-food restaurant in central Stockholm.

"I knew something's not right about him. I'm noticing it because I'm a bodyguard," Williams said in English. "And now, I'm looking at him like, 'Yo, what's wrong with you?' I'm looking at him and saw that his eyes were really glossy, like he's on something."

Williams then went on to explain the details of the brawl, explaining how he grabbed Jafari by the shoulders and took him away from Mayers and the rest of his crew.

Mayers had also testified earlier this week that he suspected Jafari and his friend were under the influence of some drug, which officials have not yet commented on.

The rapper pleaded not guilty at the start of the trial Tuesday, saying he acted in self-defense when Jafari and another man would not leave them alone. He had been behind bars since he was arrested on July 3.

The trial has created a stir in U.S.-Swedish diplomatic relations after President Donald Trump weighed in to support the Grammy-nominated recording artist. Trump has spoken with Swedish Prime Minister Stefan Lofven, offering to personally guarantee A$AP Rocky's bail, but the Swedish leader said he couldn't interfere in a legal case.

The case has also drawn the attention of celebrities, including Sean "Diddy" Combs and Justin Bieber, and a social media campaign that was pressing for the rapper's release.