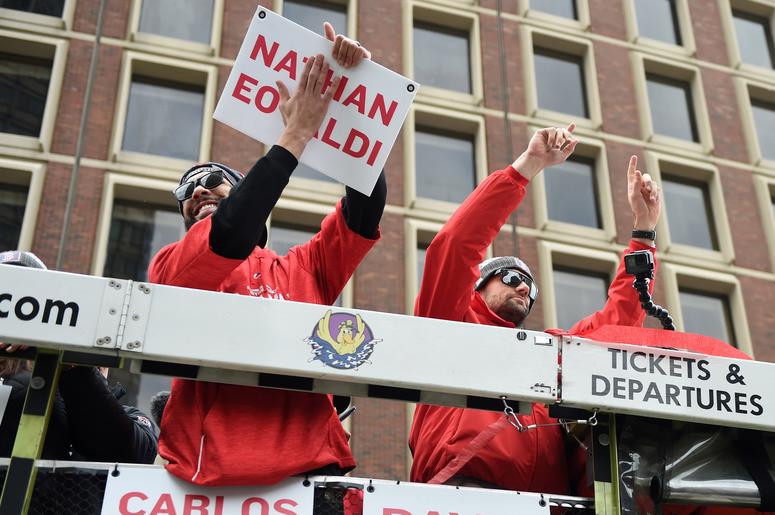 When the Boston Red Sox right-hander walked off the mound in Chicago on Aug. 31 after allowing three runs over two innings, he found himself heading into the regular season's final month having allowed 17 earned runs over 19 innings in his previous five starts, with hitters managing a .404 batting average over that span. Remember that?

The advice was coming from all angles, including Pedro Martinez swooping in to suggest Eovaldi might want to think about landing on his toes instead of his heel. Anything and everything was in play for what was supposed to be Red Sox GM Dave Dombrowski's non-waiver trade deadline difference-maker.

But while many had turned their attention to the status of Eduardo Rodriguez and/or Chris Sale, Eovaldi started figuring things out. The guy who was making that Jalen Beeks trade really, really uncomfortable ended up holding hitters to a .169 batting average in his final five appearances, compiling a 1.35 ERA along the way.

Jump forward exactly 28 days from that last regular-season outing and you could find a different pitcher and a different story. It's fair to say nobody predicted Eovaldi receiving a standing ovation in the Dodger Stadium visitors' clubhouse. And certainly, few would have ever dared to suggest this was a guy who was about to get a four-year contract worth nearly $70 million.

According to a source, Eovaldi’s deal is four years and $67.5 million.

On paper, this would seem to be the textbook postseason overreaction when it came to committing to a free agent.

It's really not difficult to uncover examples of how ownership groups justified free-agent expenditures because of what they saw on national television in the playoffs. Go back to the Oakland Raiders signing a mediocre cornerback by the name Larry Brown to a five-year deal after he claimed two interceptions in the Super Bowl on the way to that game's MVP for the Cowboys. Two years later, he was released.  Do you think Kelly Olynyk is getting his four-year, $50 million contract with the Miami Heat if he doesn't manage that 26-point performance for the Boston Celtics in Game 7 against the Wizards in 2017? I'm guessing no.

The Red Sox have also been guilty of this dynamic. Part of their infatuation with Pablo Sandoval (who had the 97th-best OPS in baseball in the three years before joining the Sox on his five-year deal) was because his World Series exploits proved he can perform at his best on the biggest stage, and Boston is always the biggest stage. That was a reach.

With Eovaldi, there would seem to be a difference.

The postseason does factor into valuing the pitcher, no doubt. But for the right reasons. The ability to perform on the aforementioned biggest stage, but do so while living life in a Red Sox uniform in the Boston market shouldn't be discounted. And what Eovaldi presented in terms of performance in his six playoff appearances in terms of stuff and results tells the tale of a pitcher who has something every team is starving for, the potential to be a top-of-the-rotation talent.

It would be easy to say this is a guy who got hot at the right time. Steve Pearce, for instance. A useful player of absolutely found one of the best grooves of his career at the perfect moment. That was a reality that shouldn't have been difficult to decipher, which was why the Red Sox dug in on their one-year offer. Eovaldi's case is more complicated.

This is what Red Sox assistant pitching coach Brian Bannister told WEEI.com immediately after that final World Series win: "The beauty of today’s game is that there is so much untapped potential in players of all shapes and sizes. I always loved watching Nate pitch, and I felt like there was another level like I do with all the pitchers we acquire. What I didn’t know was how amazing a guy he was. His character. His makeup. He’s a family guy. He made some amazing adjustments. He brought to the table his tremendous arm strength. His durability was insane these last couple of months.

"That acquisition happened at a time when Eddie (Rodriguez) got hurt and we were talking about making the team better. We felt like he was the guy who was not only going to be a dominant starter and bridge that gap with Eddie going down but also be a weapon in the postseason in a variety of roles. I think he performed beyond our wildest dreams. That’s just a testament to him, who he is and how hard he works."

This was second baseman who represented a solid, yet unspectacular, option at second base for the New York Mets leading into the 2015 postseason. Then, boom! Nobody could get him out all the way through the World Series. And that led to a three-year, $37.5 million commitment from the Washington Nationals the following offseason. And you know what? It ended up being money well spent. Murphy compiled a .326 batting average and .917 OPS over the past three seasons.

It just so happened Murphy's career springboard came in the final three months before he hit free agency. He was 30 years old. It happens.

This is why we have to view Eovaldi's emergence in a different light than simply a pitcher who was the right guy at the right time.

Make no mistake: Signing Eovaldi to this sort of deal is a risk. It always is. But considering what the Red Sox know about the 28-year-old, how Patrick Corbin's recent six-year contract reminded us all of the expense that comes with trying to garner premier starting pitching talent, and the uncertainty that will be two-thirds of the Sox' starting rotation after 2019 thanks to the contracts of Sale and Rick Porcello, this one makes sense.

The gamble is a good one ... and it has nothing to do those championship parade "Re-sign Eovaldi" signs.