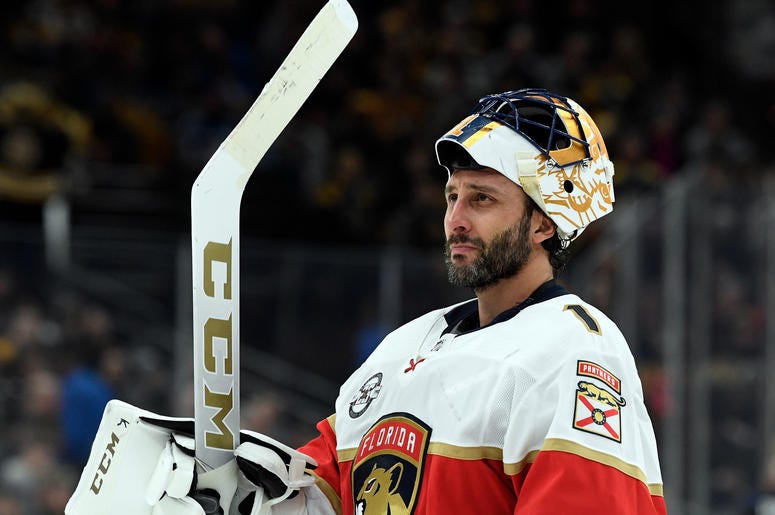 (WEEI) - The stick was passed from one team's equipment staff to the other. It was long and it was inscribed across the blade in silver Sharpie:

Short and to the point, the Bruins captain clearly wanted to send a message to 39-year-old (40 on April 4) goaltender Roberto Luongo to follow his lead and keep on playing.

"We both said wouldn't it be cool it we kept on going," Chara told WEEI.com after a 4-1 loss to Luongo's Florida Panthers.

Earlier this week, Sportsnet's Elliotte Friedman openly pondered whether Luongo may be ready to call it a career. The goaltender hasn't expressed an opinion one way or the other and he has three more years left on his contract at a salary-cap hit of a little more than $4.5 million to the Panthers. He'll be making just a little more than $1 million in actual cash if he stays on the active roster next season.

After watching what Luongo did to the Bruins on Saturday, though, who could disagree with Chara's advice?

In a vintage Luongo performance the man who is third all-time in NHL wins (488) and games play (1,042) stopped 30 shots, including 16 in the third period, to make the Bruins' attempt to clinch second place in the Atlantic Division a little bit tougher.

The Bruins had their share of chances, including Chara's wicked wrist from the left faceoff circle at 18:51 of the first period. But Boston didn't get the bounces, and when they might've gotten a bounce Luongo was there time and again to make a save.

After not losing a home game in regulation since Jan. 19 and not losing a home game in any fashion since Jan. 30, the Bruins were due to deliver a clunker in front of the Boston faithful. They now head out on the road for games against Detroit, Columbus and Minnesota, where they should accumulate enough points it wrap up first-round home-ice advantage. Their lead heading into their final four games was six points on Toronto before the Maple Leafs took the ice in Ottawa on Saturday.

As for Luongo, the man mostly famous around these parts for his disastrous three Stanley Cup final games at the Garden, but famous elsewhere as one of the best netminders of his generation and a future Hall-of-Famer, continued to impress.

"Well he's had a heck of a career, you know," Bruins goaltender Tuukka Rask said. "I mean a great, great goalie. Still fun to watch that he's plugging away and making great saves out there. I don't know how many year he's got left but happy to see there's still veteran guys out there."

After crediting his defense and the way his team finished a few of its chances, Luongo returned to his stall in the visitor's dressing room where a signed goalie stick for Chara was waiting, leaning up against the wall. It was unclear what precipitated the stick exchange between two of the few remaining players who were drafted in the '90s - each player said the other one asked for it - but it was a sign of respect and a reminder that the game has changed but there's still room for some older guys in it.

The Bruins may have wished Luongo had already taken his stick and gone home, but he was around at least to beat them one more time (improving his career record against Boston to 18-17-2). And if Chara has any say in it, the Bruins will be seeing Luongo again in 2019-20.

Chris Wagner was voted by the fans as the winner of NESN's 7th Player Award, which goes to the player "who exceeded the expectations of Bruins fans." After signing as an unrestricted free agent over the summer, the Walpole native had 18 points (12 goals, six assists) in 75 games when the dust settled on the Bruins' loss to Florida. "I watched Blaine Lacher get it back in like ['95], it was one of the first games I remember. So to get the fans support like that in my first year home, it really means a lot to me."