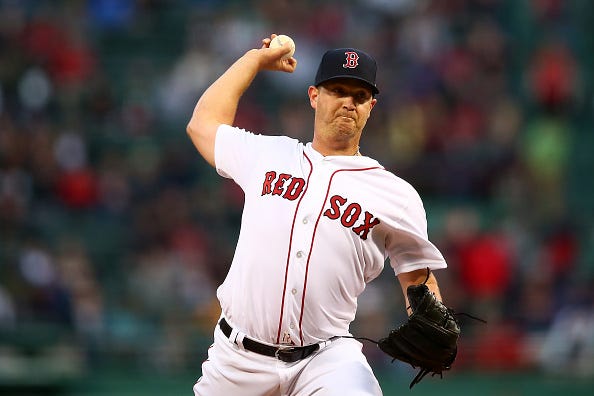 (WEEI) -- In an exclusive interview with the Bradfo Sho podcast Red Sox pitcher Steven Wright revealed his life since he was suspended 80 games for Growth Hormone Releasing Peptide 2, including his address to the team after the news came down.

"I think it was probably one of the most difficult things you have to do," said Wright regarding the talk with his teammates. He added, "I felt like it was my duty to give them somewhat of an explanation."

Wright, who is eligible to rejoin the Red Sox 25-man roster Tuesday, is honest in his assessment of how the suspension has impacted him and his relationship with the organization.

Wright was first told he tested positive Dec. 27 and then discovered his appeal had been denied March 6. During the suspension, he has been working out in Fort Myers before beginning his minor-league rehab assignment with Triple-A Pawtucket.

"At the end of the day I'm nervous," he admitted regarding his return. "I've been looking forward to this day for a long time. I wouldn't say I'm scared but there are a lot of nerves because there is a lot more that comes into this than, 'I'm going back to the big leagues to pitch.' It's not that simple. It's not like I'm getting called up. I'm going back into a situation that I ruined for myself and so I have to go and try and make it better. The only way I can do that is go up there, do my best, hopefully, be successful and hopefully over time things can get back to as close to normal as they possibly can."