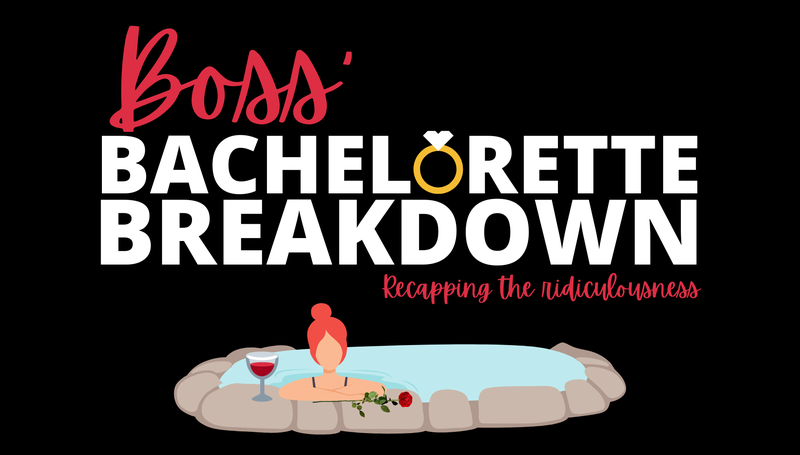 It's Boss' Bachelorette Breakdown, Baby! Here's how it works: I watch the show, I drink some wine, I take some notes. Then, I try to make sense of those notes and write a recap for you. So hereeee we go!

This week on The Bachelorette we’re sailing to Amsterdam! Gabby describes it eloquently, “I’ve never seen so many boats or bikes in one city.”

Rachel and Gabby both have 1 on 1 dates this week and both ladies pick repeats! Rachel chooses Zach and Gabby chooses Nate. Game over, other dudes.

Host Jesse Palmer meets the women at an outdoor café and goes for the hug with Gab. Gab tells him, “Sorry I don’t wanna get up.” Gotta appreciate the honesty.

Jesse asks the hard hitting questions that only the host can ask like…. ‘How are you feeling’ and ‘hometowns are next week, how does that make you feel?’ To which Gabby responds ‘Nauseous.’ LOL

When Nate arrives Gabby kisses him super hard, but it feels like it’s a goodbye kiss? Oh no, Gabby gave Nate a 1 on 1 so she can break up with him?! Who does that?!

For reasons KNOW ONE WILL EVER UNDERSTAND, we cut to a forced conversation between Logan and Johnny, who I am just realizing look alike... They discuss Nate and Gabby’s connection in the most monotone voices and it’s clear the producers asked them to have this conversation and neither of them are very good actors. Honestly, who needs Tylenol PM when you can listen to these two?

Okay back to Gabby and Nate. Gabby is breaking down already. She tells Nate, “You’re fine, don't be scared” but he should most definitely be scared. Girl is bawling out of nowhere 5 minutes into their date. Gabby pretty much tells Nate that she has deep feelings for him and she never wants to say goodbye but she doesn’t know if she’s ready to be a mom yet and doesn’t want to meet his daughter and fall in love with them both and then disappoint his daughter. As we know from every episode this season, Gabby’s got some serious mom issues.

She hits him with a ‘It’s not you, it's me.’ and she truly means it. Nate, ever the gentleman, (at least on this show but apparently not in real life!) tells her that she’s going to be a great mom one day, when the time comes.

Tears are shed by both parties as they kiss goodbye... never to see each other again except for when they’re forced to talk about this exact moment a few weeks from now during The Men Tell All!

Well dang, Gabby’s left with a bunch of chumps. I guess she’ll end up with quiet Jason?

The production team has dropped Rachel off in a sprawling field of tulips. It’s pretty awesome. Zach finds her in the field and she jests, “Will you accept this tulip?” Cringe.

Rachel and Zach spend their date taking polaroid pictures in the fields, struggling to ride bikes, drinking wine and eating cheese. What a dream. Oh look, a clogs saleswoman on the side of the road. How did she get there?! Oh look, children peddling lemonade… I’m beginning to think this is staged….

Oh but the greatest staging of all – a hot tub in the middle of the field!!!! Yay! Rachel and Zach pop in the tub and she’s stroking his hair while staring at him with crazy eyes. She wants him baddddd.

Time for dinner – Rachel’s got some huge party sleeves on! I love a good party sleeve but those are BIG.

Okay Zach’s got drama, let’s hear it! Hmmm he tells Rachel he was 85 pounds overweight, didn’t know how to love himself, and the thing that really helped him was therapy. Rachel LIGHTS UP. She loves therapy, too!

Zach hits her with the “I am falling in love with you!” They kiss. Zach gets the rose. They love each other.

Logan shares that his safe word is ‘asbestos’. Nobody cares Logan!

Gabby says, “Today was just what I needed!” Hahahaha…. what.

For the night part of the date, Erich, Johnny, Spencer and Jason are sitting around waiting for Gabby… and Logan. Where is Logan?!

Cut to Jesse showing up at Gabby’s door and telling her, “We have a bit of a situation with one of your guys. Logan tested positive for Covid-19.” They are forced to cancel the cocktail party.

What’s terrible is that Jesse tells the guys the cocktail party is canceled and just says ‘there’s been a situation with Logan’. I mean… don’t these guys deserve details?!

They’re in the ‘Cheese Capital of the World’ and the date is all about cheese and I am here for it.

The guys have to compete in a muscle man competition to be named The Cheese King. They hold up pounds of cheese on their back, while shirtless of course. Surprisingly, lactose intolerant Ethan does well in the competition. But, he taps out mere moments before Tino and Tino is crowned The Cheese King. Gouda job, gentlemen!

Time for the evening portion of the date. We see yet another round of big sleeves for Rachel. I think she makes out with all the dudes but the date rose goes to….TYLER!? WHAT!? I am actually shocked. Tyler is too clingy for my taste but I guess Rachel loves it.

Oh yay Tino is about to have a tantrum! Tantrum Tino! Tino says to Tyler “Congrats, seriously”. Then he storms off to complain about how he “I hit all the points today” and can’t understand why he didn’t get the rose.

In the greatest moment of the season, Ethan calls Tino a ‘baby back b*tch’. LOL.

Cut to Gabby’s guys and we find out that Logan is just out!? He’s no longer allowed to be on this love journey because he has Covid…. Very suspect.

Gabby explains that she only feels comfortable giving out 3 roses for hometowns. This girl is very level headed.

She gives roses to Erich, Jason, and Johnny. That means we must say goodbye to the silent and handsome army man, Spencer.

Rachel gives roses to Aven and Tino. Zach and Tyler already have roses. That means we’ll see you in Paradise, Ethan! You earned your spot with that baby back b*tch comment! 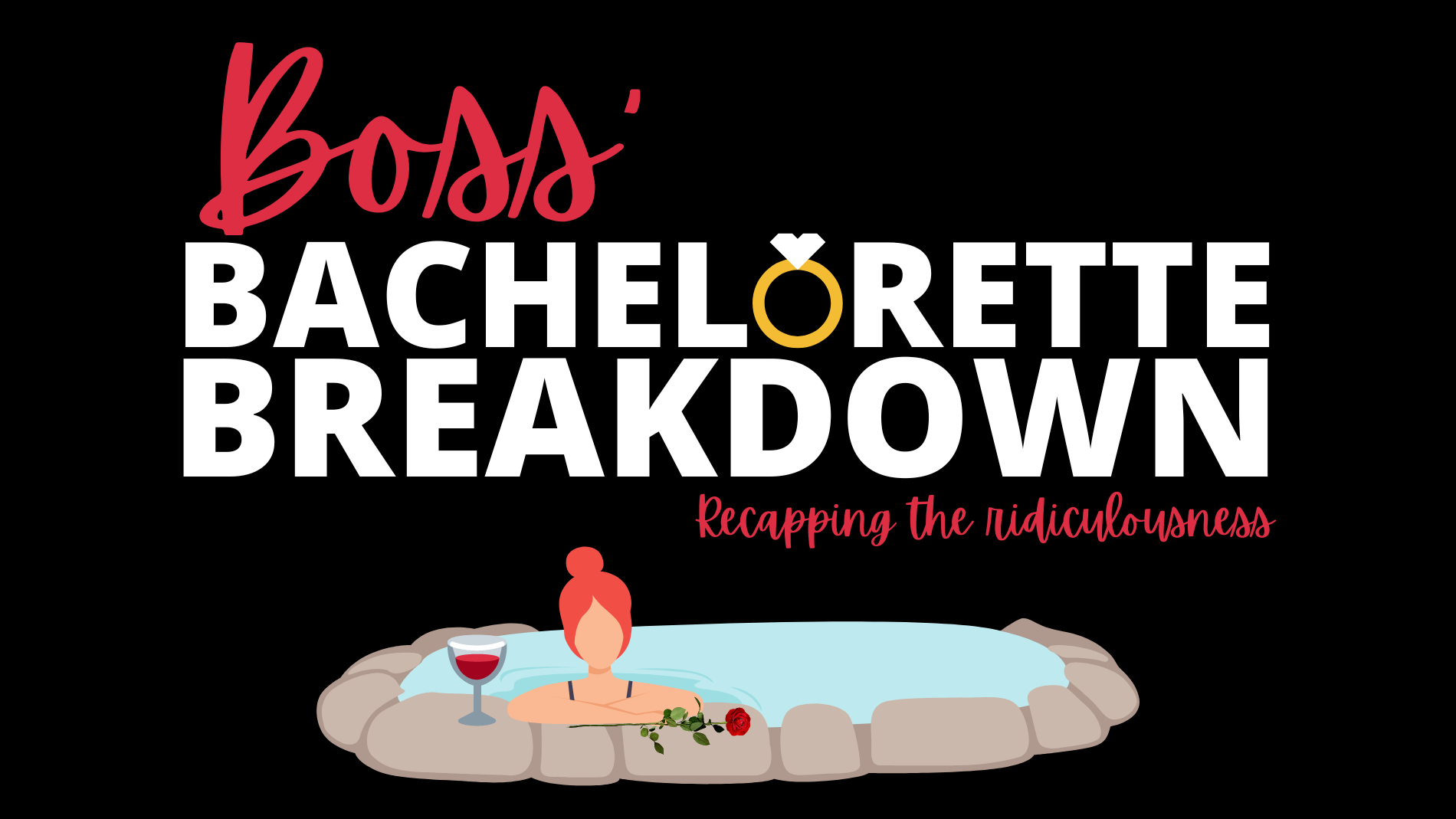 Boss’ Bachelorette Breakdown: Recapping Episode 5 of The Bachelorette Season 19 “He’s so macho and too cool for school”