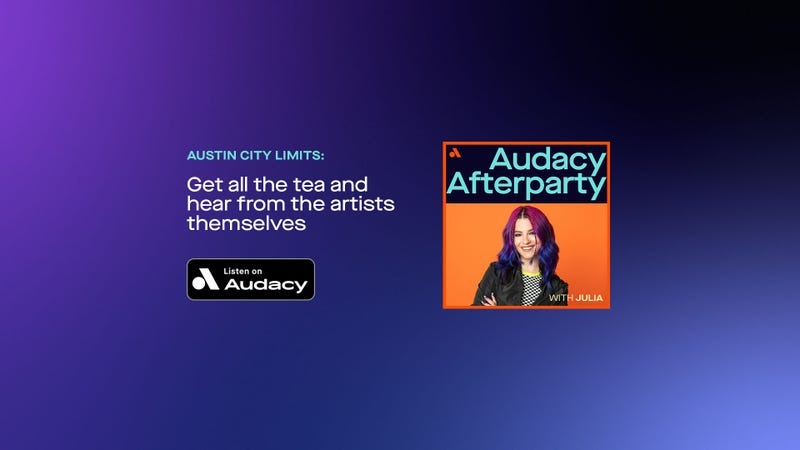 The 2022 edition of Austin City Limits is here, taking place the weekends of October 7 through 9 and 14 through 16 in Austin's Zilker Park -- and we're inviting you to join us for an Audacy Afterparty to celebrate!

Listen to the Audacy Afterparty on the free Audacy app

With artists like the Red Hot Chili Peppers, P!nk, The Chicks, SZA, Kacey Musgraves, Marcus Mumford, Phoenix, Lil Nas X, Death Cab For Cutie, Paramore, and others headlining -- plus tons more on the massive bill for the first weekend of Austin City Limits -- there was plenty to talk about once it all wrapped up.

Join our host Julia as she recaps all the highlights from a big Weekend One of ACL on the Audacy Afterparty featuring discussions on the fashion, the scene, and the music -- and you'll also hear from some of the artists themselves, including Marcus Mumford, Omar Apollo, GAYLE, Sofi Tukker, Big Wild, Noah Cyrus, Omah Lay, Conan Grey, Jake Wesley Rogers, and more!

Currently on a theater tour in support of his first solo release, self-titled, Marcus Mumford has been enduring quite a bit of happy heckling from his audiences, the kind normally found at comedy shows. "Most of the time it's nice things, sometimes it's weird things. There was a heckler the last show in Phoenix, who screamed out in a really panicked tone, 'I named my son after you!' I just thought the tone in which she said it was so funny... so I stopped and we had a quick chat about it. I checked if she was alright actually -- and I think I was really rude to her and asked her whether she regretted her choice to name her son after me. I get quite a lot of pets, I haven't had that many humans. There's quite a few Mumford pets flying around." Listen to Julia's full chat with Marcus above to hear about surprise live standouts, the "magic" of festival experiences, working with Elton John, and more.

Noah Cyrus just dropped her debut album, The Hardest Part, in mid-September and is currently on the road to bring the new tracks to fans. "I really appreciate all of the kind words," says Noah. "Definitely filled with a lot of gratitude from a lot of different people and places... the support has been incredible." Getting to play the tracks on tour and experiencing the record live has been the most fulfilling part of the journey, she says, admitting she has been "blown away," by the crowd's response. "For me," she adds, 'My Side of the Bed' is always a special moment."

"This show was just so much fun... I'm not a festival person; I've never understood festivals and I've never attended a festival as just a normal festival attender," says Superache singer Conan Grey. "I feel like I'm always learning more every single day. Everyone has a different vibe, so it's always a challenge actually." Grey adds, "I'm a spoiled brat because I mostly have done my own shows this whole time... it's such a different environment at your own show than to be at a festival where there's people who are there to see a ton of different artists. I'm so used to everyone having a certain feeling and knowing all the inside jokes of the fandom... then you play a festival and you're like, 'oh yeah, no one really knows what's going on here.'"

LISTEN: 'A Study of the Human Experience' with GAYLE

Following up her 2021 hit "ABCDEFU," Texas native GAYLE just dropped the second EP in her A Study of the Human Experience series on October 7, so she knew arriving at ACL, one of the biggest fests in the country, meant she had to "represent." GAYLE tells Julia, "I'm very excited about the wide range of emotions that, at least I feel personally, that I haven't always talked about or shown parts of myself that are on the second EP... not necessarily talking about it negatively; just like, this is how I am sometimes." Listen to the full ACL interview with Julia and GAYLE above -- and be sure to catch her on stage this December at Audacy Beach Festival.

Hear Julia's full Weekend One recap of Austin City Limits on the Audacy Afterparty -- streaming on the free Audacy app.