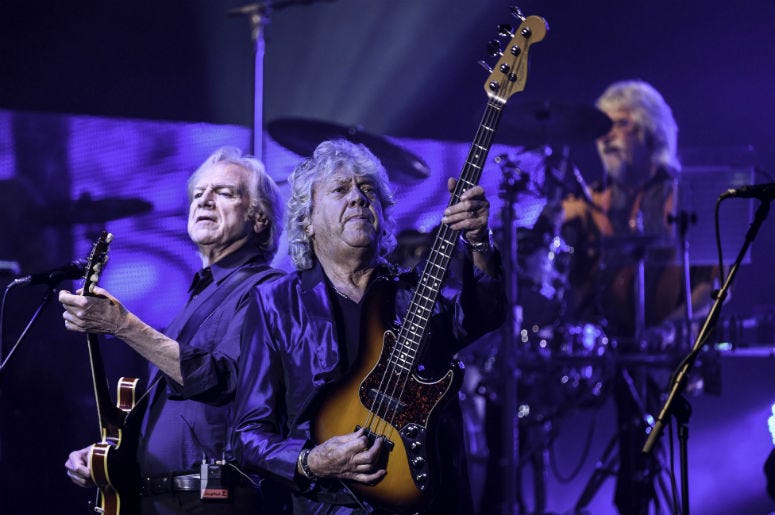 Choosing my 3 favorite albums from The Moody Blues is tough because there's so much good stuff to choose from. Here it goes anyway.

3. Days Of Future Past

It's the landmark album that firmly established them as international stars. The length of the songs was a bit at odds with what radio stations were playing back in 1967, but even the edited versions of "Nights In White Satin" and "Tuesday Afternoon" allow you to get the feel of this marriage of rock and symphonic music. It's considered the first Moody Blues album, ignoring the Denny Laine era. This one tops many peoples' lists, but the similarity of the songs puts it at number 3 for me.

The 1972 classic featured a less ethereal sound, with better songs of consistent quality that still fit the evolving sound of the band. Great songs like "I'm Just A Singer (In A Rock N Roll Band)" and "Isn't Life Strange" never had a chance, as the record company re-released "Nights In White Satin." Progressive rock stations would now play the whole song, and since the song was found at more proms than a bottle of sloe gin, they capitalized on it five years later. At the expense of a much better album. But the music business wasn't always kind to them.

1. In Search Of The Lost Chord

Psychedelic and proud of it. A quasi-concept album, this second album of the "new" Moodies had it all: a hit single, "Ride My See Saw", the glorious spoken word interludes, and songs that defined the world in 1968. Songs evoking Timothy Leary, "Legend Of A Mind," and meditation, "Om," made the Search a real trip indeed. A little more time in production would have made it an even more enduring cornerstone in the legacy of the Moody Blues.

On the strength of these 3 albums alone, The Moody Blues should have been inducted into the Rock Hall some time in the previous century! But this is all just the opinion of one "veteran cosmic rocker." Congrats to the Moodies on this honor that is as well-deserved as it is long overdue.