When the Yankees won Game 5 of the American League Championship Series, they gave your the impression that they'd win Game 6. And then when DJ LeMahieu belted that ninth-inning homer Saturday night, you had the sense Game 7 was around the corner.

But Saturday night, like the entire series, was a montage of just-misses for the 2019 Yankees, their season ending in six games of the ALCS, when Jose Altuve broke their hearts and backs with his n-th clutch hit, this time a two-run homer off of Aroldis Chapman in the bottom of the ninth to win it 6-4.

You will hear some hard truths and some hardcore fantasies over the next week. Among the fictional narratives is that the Yanks just got cold at the wrong time. The Yankees did not arbitrarily go cold. They were frozen by fine pitching.

All the Yankees' strengths — from their bottomless lineup to their volcanic bullpen — were simply silenced by the Astros. Game 6 was the quintessential test of each team's relief pitchers. And yet Chad Green, a multipurpose reliever who started 15 games this season, gave up three quick runs in the first inning, which ushered an aura of doom over the night. 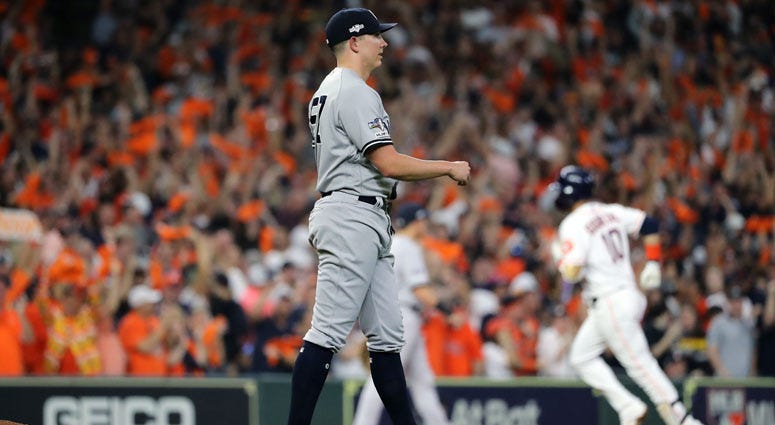 Had the Yankees lost Game 7 to Gerrit Cole, you could say they could not slay the hottest pitcher on the planet, because no one could. But instead they choked on a bullpen broth of Brad Peacock, Josh James, Ryan Pressly, Jose Urquidy, Will Harris, Joe Smith and Roberto Osuna.

The Yankees lived for games like this, when they could trot out their conga line of high-grade reliever, and watch the enemy wilt under all that arm talent.

But in Game 6, like the entire ALCS, the Astros had the answers. They schooled the Yankees on clutch hitting, timely pitching, swift fielding and smart base running. They beat the Yanks with their arms, legs, gloves and bats. There wasn't an area of baseball in which Houston was not just a bit better than the Yanks.

Even Aaron Boone, the Bronx Bombers’ young manager who has doubled as the darling of Big Apple baseball, made some questionable moves, such as allowing that fourth run to score rather than play the inflield in with men on first and third and no outs (giving John Sterling all kinds of agita during the WFAN broadcast).

Speaking of Boone, the affable, low-key skipper, turned in a season of conflicted results. Boone is the first manager in MLB history to win 100 games in his first two seasons. Now he's also the fifth manager to win 100 games in back-to-back seasons and then fail to reach the Fall Classic in both.

Most of all, the Yanks just can't beat the Astros. The Bombers have reached the playoffs four times since 2015 and were bounced by Houston in three of them. Houston's big-ticket players, from Altuve to Carlos Correa to Michael Brantley to Alex Bregman, were better in the bigger moments than Aaron Judge, Gary Sanchez, Gleyber Torres and Edwin Encarnacion. Only LeMahieu, who has a surplus of clutch chromosomes, stood out all series. The Astros also understood that you win with your leather as much as your lumber, with Game 6 featuring two spine-tingling double plays started by Correa and Brantley.

And now the Yankees, with their 27 World Series rings, get to watch the Astros and Nationals, two teams with one ring combined, play for the world championship. And for the first time since 1919, the Yankees complete a calendar decade without even appearing in a Fall Classic.