(WFAN) -- Pitching is based on deception. So perhaps it's fitting that the person who doesn't look or act like a titan becomes the first unanimous Baseball Hall of Famer.

So much about Mariano Rivera flouts logic and runs counter to culture. In a game of deception, he threw one pitch. In a craft often defined by changing speeds, he threw one fastball. A cutter that spins out of his fist at your elbow before ducking under your wrists. Batters hack at the ball, then stroll bewildered back to the dugout with a splintered knob in their fists.

Playing a position often built on intimidation, Mariano Rivera was as gracious as he was gifted. He doesn't have the fire-breathing mien, the booming biceps or the hulking shoulders of the modern closer. He didn't have self-serving handles or spastic celebrations. He had no rap sheet, no posse and no demands.

His motion was as simple as it was graceful and powerful. He tapped his left toes on the mound, slowly lifted the leg, casually reached back, then hurled a baseball unlike anyone in MLB history. He has five World Series rings. He retired in his 40s, with plenty of cutters left in his quiver.

ESPN recently ran a piece wondering if Mo - his only, simple sobriquet - would be a Hall of Famer if he had only pitched in the regular season or in the playoffs. The two were not mutually exclusive, but it showed how wholly untouchable he was all season. 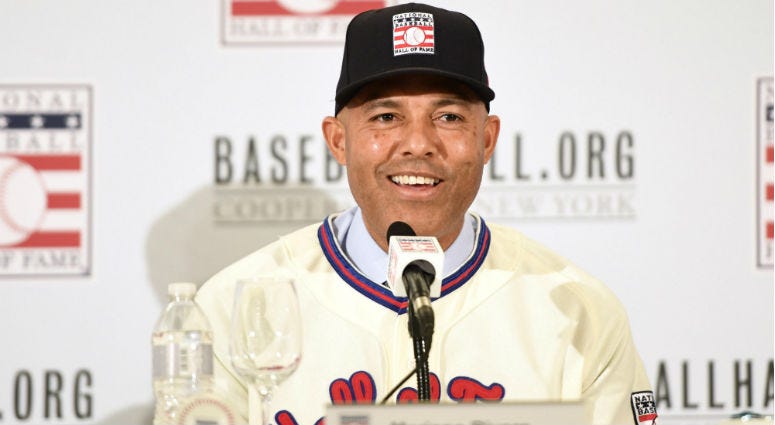 We have countless iconic moments from the laconic, iconic Yankee, whom some of us place above everyone in Yankees history aside from Babe Ruth. Perhaps his greatest moment came when he pitched those three innings in Game 7 of the 2003 ALCS, a series ended, coincidentally, by Yankees skipper Aaron Boone. The exhausted reliever ran to the mound and collapsed in relief and gratitude.

As teams scrambled for relief pitching — and that one pitcher to own the ninth inning — the Yankees had just one for over 15 years. Perhaps his only tribute to the volatile nature of his profession was the Metallica song (“Enter Sandman”) that boomed every time he jogged from centerfield toward the mound.

But even as baseball is our oldest game, most married to statistics, it's not the numbers alone that make Mariano Rivera so special, and such a stand-alone person among people who try very hard to stand out.

Nearly a decade ago, Sweeny Murti brought me as a guest to Yankee Stadium, where I met Mo on the sun-baked infield and then walked to the dugout. At first, my goal was to discuss pitching with the pitcher nonpareil.

But Mo was so kind and cool — chatting with me through the forest of children’s limbs reaching down with programs and baseballs, each of which Mo would pluck, sign and then return — that the topic became incidental. He was as kind to an awestruck sportswriter — Mo was the only active pro athlete I still truly admired — as he would be to a teammate, his manager or Hal Steinbrenner.

Mariano Rivera was home in many places: In the Bronx, or in October, in summer, in long sleeves under brown leaves or in the Fall Classic. But he belongs forever in Cooperstown. Quite fitting for the singular, standout relief pitcher who never cared about standing out.