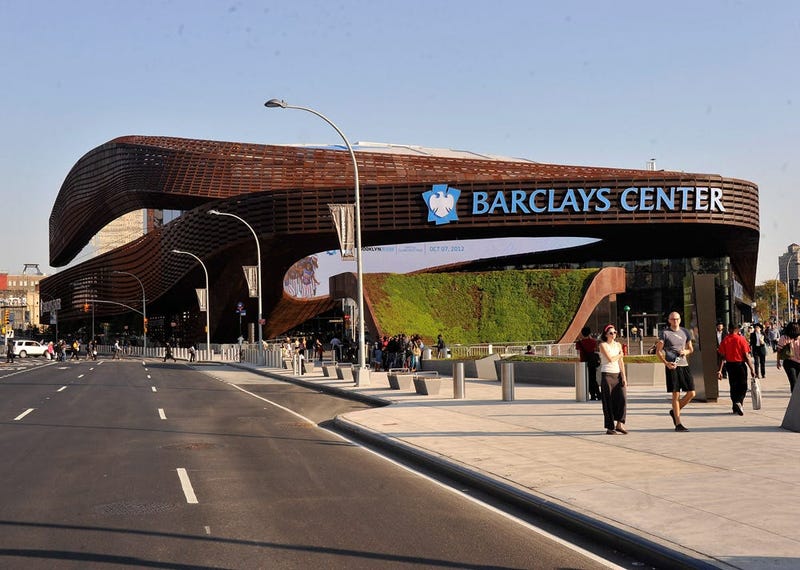 Going to a concert or a sporting event on an empty stomach is never a great idea. In fact, it’s a surefire way to end up on a massive line at the venue's vendors - because, to be honest, Barclay's has some superb selections like Paisanos Burger, Happy Cow, BK Ballers, Brooklyn Taqueria, Brooklyn Bangers & Dogs, Sugar Factory, Habana, Junior’s, and more.

So as you prepare for RADIO.COM's Stars and Strings on December 4 and Not So Silent Night on December 5 at Brooklyn's Barclays Center, plan on getting there a tad early so that you can grab a quick bite before the show. Better yet, save room for an after-concert burger, pizza, or snack to fuel up before heading home. If you dine at any one of the below eateries, you’ll be glad you did.

Patsy's has been serving pizza in Brooklyn since 1933 – so they must be doing something right, considering the competition! Their Park Slope location at 450 Dean Street is directly across the street from the Barclays Center, making it a convenient stop on your way in or out of the Center. Grab pie to share with friends or a meatball parm to enjoy. Patsy's is no simple store-front pizzeria, however; it is a full-service Italian restaurant. So when you have a little more time, go for the pappardelle wild boar ragu - it’s unforgettable. We're big fans!

Any regular visitor to the Barclays Center knows the best spot for a quick burger and fries is the Shake Shack over on Flatbush Ave.  It has the same great, affordable burgers and shakes as each of the other Shake Shacks around the city, and with the same fast service.

Looking for a quick bite before the show but not sure what you’re craving? The DeKalb Market Hall at 445 Albee Square is sure to have something to hit the spot. It has vendors offering everything from bagel bakeries, creameries and cocktail bars to hamburger joints, seafood spots and wine bars. From deli to delicious, DeKalb has something for everyone – but only until 10 p.m., so this is a pre-show spot.

When 5ive Spice Tacos and Bahn Mi invites customers to come and taste “the spice of your life,” people listen – especially people going to the Barclays Center. This Vietnamese restaurant at 52 Fifth Avenue is just a few blocks away from the venue and is great for a before-the-event bite (but not after, as they close at 10 p.m.)  They make great rolls and dumplings, delightful Banh Mi sandwiches (a single-serving baguette sliced partway and stuffed with...well, just about anything), and warming and filling Pho Noodle Soup. Their tacos are not the same as Mexican or Tex-Mex, as the shells are a fried crepe made with rice batter. Fast, affordable, filling and yet still satisfying – as well as different from your average before-show snack, 5ive Space Tacos, and Bahn Mi is well worth it.

For those who have just a little more time to breathe before going to the show at the Barclays Center, Alchemy offers a cozy, comfortable and classy pub atmosphere in which to enjoy a more leisurely, sit-down meal.  They do serve dinner until 11 p.m. (midnight on Fridays and Saturdays), but that could be rushing things if the event at Barclays goes late. The menu is not just burgers, salads, soups and sandwiches, but also includes full dinners of pan-seared salmon, grilled hangar steak, and a very filling gnocchi with butternut squash, among other items.

If it’s a cold night, stop into Wasan Brooklyn for a steaming bowl of Seafood Miso Soup and a shot of hot Sake before heading over to your show at Barclays. This Bergen Street restaurant uses local ingredients to create seasonal, traditional Japanese dishes you’ll rave about.

music
'Bar Rescue's Jon Taffer foresees a roaring '20s as restaurants and bars reopen post-COVID
music
Limp Bizkit 'Break Stuff' but make it Broadway? Yes please
music
Megadeth, Lamb Of God heading out on co-headlining 'Metal Tour of the Year'
music
Audacy's Back To Back: Cam, Lady A, Lainey Wilson
music
Noel Gallagher announced as ambassador for 'Record Store Day': 'We owe it to the young people'
music
Tom DeLonge reveals he got married at the courthouse: 'I feel free'