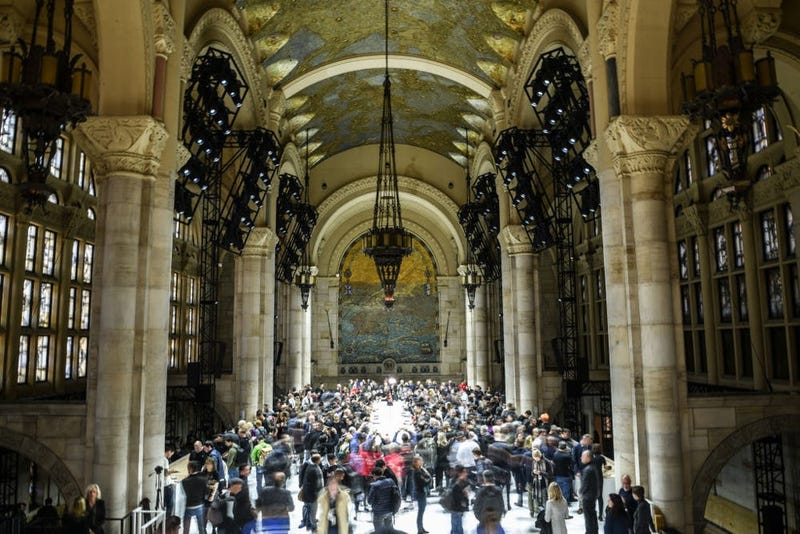 With RADIO.COM's Stars and Strings on December 4 and Not So Silent Night happening on December 5 at Brooklyn’s Barclays Center, a lot of people will be heading to Brooklyn this season. But people shouldn’t just go to the venue and then hop in an Uber once an event is over. BK visitors should make it a point to hit up these five locations to take in some local culture and snap a few selfies.

To truly know a place, a person has to sample its cuisine, and there’s no better place to get a sampling of Brooklyn’s diverse and vibrant culinary scene than the Dekalb Market Hall. Home to more than 40 different vendors, Dekalb offers visitors mouthwatering octopus tacos, classic hand-carved pastrami sandwiches, full-bodied wines and scrumptious Hennessey-flavored donuts. This is a phenomenal place to take some selfies and gramable food photos.

In addition to being the preeminent major event venue in Brooklyn, Barclays Center is also a fantastic place to take some pictures. The $1 billion of indoor arena’s beautiful SHoP Architects-designed exterior is practically a work of art. Plus, the 117-foot oculus that wraps around the complex’s entrance is a wonderfully modern design element that also reflects Brooklyn’s working-class roots. For first-time visitors especially, a selfie in front of Barclays is practically mandatory.

For 157 years, the Brooklyn Academy of Music has served as the borough’s artistic hub. Having hosted presentations from the likes of Peter Sellers, Philip Glass, Alice in Chains and Ingmar Bergman, BAM is a legitimate cultural institution. And with its bold granite, marble and terra-cotta architecture, it’s also one of the most iconic buildings in the state. As such, Barclays Center visitors should definitely make a point to take photos of such a historically significant location.

Anyone coming to Brooklyn for a concert, game or another event with a few hours to kill should make plans to visit the Brooklyn Escape Room. For $30-35 a head, groups of two or more can have an unforgettable and truly terrifying experience trying to get out of one of the venue’s three escape rooms. Currently, BER features a fallout shelter with a limited oxygen supply, a haunted house that conceals a spine-tingling secret, and a medieval dungeon inhabited by a merciless executioner. Obviously, no one should visit an escape room without taking a few selfies.

One of the coolest things about Brooklyn is that it’s filled with so many unusual places and activities for tourists to visit and partake in. For instance, although archery isn’t an activity associated with modern-day New York City, Brooklyn’s Gotham Archery allows guest to sharpen their marksmanship skills. In addition to offering classes that will get novices familiar with the basics of archery, Gotham also offers an ax and knife throwing class and 3D hunts that allow participants to hunt deer, giant fish and velociraptors. It’s also a great place to snap some instantly memorable pics.

music
Tom DeLonge reveals he got married at the courthouse: 'I feel free'
music
Emo Nite: HUNNY look forward to getting in front of fans with new music
music
A whole night of Coldplay is coming to 'American Idol'
music
The Weeknd still 'uninterested' in GRAMMYs despite changes
i'm listening
What is Mental Health Awareness Month?
music
Vote on the Audacy Country Top 20 with Jesse Addy