Katy Perry hopped on Zoom with RADIO.COM’s Karson & Kennedy at Mix 104.1 in Boston for an amazing chat about babies, daisies, her mental health, and more!

“Every day is a winding road,” Katy sings when asked how she’s holding up throughout all of the life-changing aspects of 2020. “It gets a little bit weirder,” she laughs. New music, a new baby on the way, and a new normal as far as live music are all on the horizon for the superstar.

Katy Perry and her fiancé, Orlando Bloom, announced that they're expecting their first child together back in March 2020 and have since found out it will be a baby girl. “We have yet to decide specifically on her name because, I think, we’ve got options and she’ll tell us,” says the “Daisies” singer about whether or not the couple have chosen a name. “I’ll look at her and go, ‘oh yea yea, you are her, you are that.’”

Katy was present when her sister gave birth to her daughters in her living room, and she lives close by so she’s has had quite a bit of experience with kids over the past few years. “There are a lot of rules. I mean you start sacrificing,” she admits about what to expect while expecting. “You start becoming a mother, or a parent, once you conceive. Definitely.”

As for the “girl-dad” to be, Orlando who is already father to a son named Flynn with ex-wife Miranda Kerr, got to spend concentrated amounts of time with Katy’s nieces during quarantine and Katy says he’s “really excited for a little girl. They say that little girls are, you know, daddy’s little girl, that’s how it’s gonna be, we’ll see!”

“I’m as excited as I can be,” Katy says about becoming a mom in 2020. “I’ve been every emotion under the sun. I’ve been overwhelmed, I’ve been anxious, I’ve been happy, I’ve been overjoyed, I’ve been depressed. I’ve been all of it. The world is just a wild time and it’s a wild time to bring life into the world. People were already having those kinds of conversations years ago where it was like, ‘man, the world feels a little uncertain,’ and now it really feels shaky boots.”

It's a shaky time to release a record as well, but that’s also on the to-do list for Katy this year. Although a name for the record hasn’t been decided upon she expects one soon, and plans to drop more singles while we wait. Also, get ready to see the singer side by side with some fresh faces on the new record. “There are features, how ‘bout that?” Katy slyly announced, while warning it’s not a full-on collaboration record. “It’s nice to have a feature and it’s an unusual one for sure.”

Also unusual, Karson’s cat-themed face mask, which he donned for the feline-friendly singer to get her reaction.

“At the very beginning of quarantine it was like, ‘how do we get a mask?’ But now I think it’s fun that people are showing off their personality. Some of my favorites are the ones that say, ‘if you’re reading this, you are too close,’ and I also like the ones that have penises on them. Because if you can see that, and if it offends you, you are TOO CLOSE!” 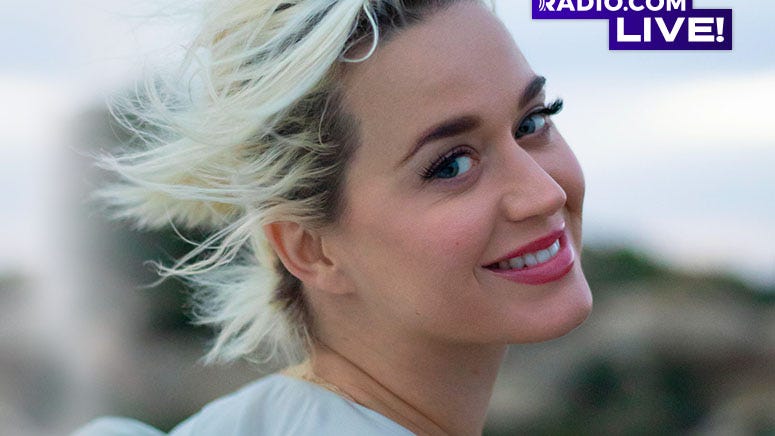 ANYWAY… Katy’s new album is coming out on August 14th!

Uncertainty in the world, new motherhood, relationships… all of this can take a toll on one’s emotional well-being and Katy has consistently been an advocate for mental health.

“To me, the brain is the mind over the matter. It’s the magic. It’s where you can control everything.”

Whether employing hypnotherapy for smoking or bad habits or being forced to face things during a pandemic, she says the brain is continually transformable and growing all the time – but to be still and face it is always hard.

“I grew up in an atmosphere where mental health didn’t exist. I remember I didn’t believe in ADD, and I told a kid in sixth grade, I was like, ‘that’s a cop out, you don’t have ADD,’ and he like literally socked me in the mouth,” she admits.

“It was like the first time I got in a school fight. Obviously he was definitely struggling. I just think there’s a lot of natural tools to be able to use to combat depression and anxiety. And when I turn to my tools, which I don’t all the time, sometimes I just get really lazy and sometimes I’m too depressed to even turn to tools, but I do things like meditation and conversation with other friends. Taking the taboo-ness out of it. And being in nature, when you’re allowed to be in nature.

“But this is what the whole record that’s coming out August 14th is about. It’s about finding my smile again and coming out of the darkest time of my life where I was clinically depressed. I was on medication. I was in bed; I couldn’t get out of bed. I didn’t know if I was gonna live to see the next day. And all the while I had to put on a happy face and play that part as you do. I got through it, and I really did, and I got through it with my family, with Orlando, with other support, with therapists and doing some deep diving emotionally on some stuff I had been through.

“I went through a super journey the last two years and that’s what this record is about. And so, it’s a wonderful touchstone to me.”