This should start with some context. The last time the KROQ Almost Acoustic Christmas was held in Orange County, Napster was a thing. KROQ hadn’t been back to Anaheim for a Christmas party since 1999, back when the venue was still called the Arrowhead Pond. That kind of time away is destined to make the heart grow fonder, and the proof of that was the sold out crowd that filled the Honda Center for the first night of the two-part party. Every song, every artist, every highlight of the night was punctuated by an enthusiastic arena that was eager to soak in Saturday’s stacked line up. Here are the goods. 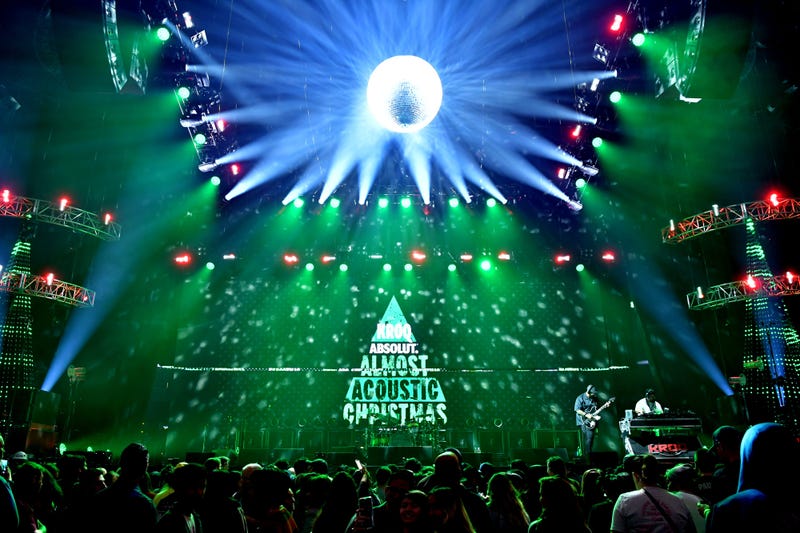 As KROQ’s official selector, DJ Jeremiah Red has the tall task of immediately injecting some energy into an arena. Enlisting the help of renowned guitarist Rod Castro, Red opened the main stage with a patchwork of music that was all party. It was impressive to watch the floor fill in quickly and see fans in their seats moving along the music so early in the evening. The technical nuances of the DJ aside, Red’s ability to read a crowd and rock it swiftly really is an art.

Stylish in both sight and sound, Catfish and the Bottlemen kicked off KROQ’s return to Anaheim with “Longshot” and quickly set the bar for the night. Frontman Van McCann’s onstage presence is commanding, convincing. Following up with trio of the band’s hits in “Kathleen,” “Soundcheck,” and “Pacifier” the fans in stands were officially worked up into a fever. Closing out their set with “Cocoon,” C&tBM managed to package a concise set comprehensively, giving the fans a thoroughly satisfying mix of old, new, and essential.

While the context of the song isn’t particularly holiday-ish, there was something about the vocal harmonies to “Missed Connection” from The Head and the Heart that really felt optimistic. The slower moving swoon of tracks like “All We Ever Knew,” “Lost In My Mind” and “Shake” created a sense of closeness that made the arena feel warm. The standout track of the night for the band however was one of their latest as “Honeybee” really had the place getting next to one another.

Becoming a staple at KROQ shows, Cold War Kids just aren’t capable of disappointing the fans. It was obvious that the band’s more enduring songs like “Hang Me Out to Dry” and their closer “First” were going to score big with the Honda Center but the newer tunes proved just as effective. Songs like “Calm Your Nerves” and “Dirt In My Eyes” really put the band’s evolution front and center. There is an evident wave of energy that the Cold War Kids in complete command of.

So as not to compromise any accuracy here, the Honda Center went absolutely apes*** when Tom DeLonge and Angels & Airwaves hit the stage. From “Surrender” to “Everything’s Magic” to “The Adventure” every song added to what felt like a greatest hits set. Even the band’s latest effort in “Rebel Girl” struck a chord as the entire house was moving. Capping off their time with “Heaven,” the single’s soaring sound again filled the room with a overwhelming sense of celebration. There was something memorable, magical.

Touting one of the most dynamic sets of the night, Young The Giant continues to impress. Ranging from their more rock driven selections like “Cough Syrup” to their latest, ridiculously catchy crooner in “Heat of the Summer,” the band never wavered. Opening with “Tightrope” and closing out with “My Body,” provided the perfect snapshot of Young the Giant’s progression. From pop to rock everything the band does is sharp, smart, and dripping with style.

There is no exaggeration in saying that every single song from Jimmy Eat World was phenomenal. While the band was as brilliant as ever, there is something about watching an entire arena single every song without missing a lyric. There was no lull in the band’s 9-song set that even included their cover of Wham’s “Last Christmas,” of which provided another highlight of the night. Even during the performance of their latest in “Love Never,” the place went wild. Punctuating their set, “The Middle,” prompted the kind of sing-a-long that could be heard as far away as Disneyland.

There just aren’t enough superlatives to state the kind of talent that is Beck. To add some more context, “Loser” was released in 93’ and last night, Beck’s opening selection sounded as relevant as ever. Ageless hits like “Devil’s Haircut,” “The New Pollution,” and “Where It’s At” maintain the kind of quality that transcend generations of fans. However, songs like sophisticatedly spacey “Uneventful Days” reiterate Beck’s ability to continue to push boundaries. Selections like ”Wow,” “Dreams,” and “Saw Lighting” rallied some late night energy that made the place feel like a party. If you needed to understand why BECK maintains buzz, tonight was case in point.

The finale for night one of the Almost Acoustic Christmas saw Cage the Elephant absolutely crush. Sweetening the pot, the band would welcome Beck back out to the stage to perform “Trouble” together but the band could’ve not offered the theatrics and still made a hell of an impression. The staples like “Cold Cold Cold,” “Ain’t No Rest for the Wicked,” and “Shake Me Down” ensured the fans got their money’s worth but the 13-track set included newer tunes like “House of Glass” and “Tokyo Smoke” that made sure the crowd went home reeling.

It’s been two decades since Almost Acoustic Christmas has been back to Anaheim. Night one proved to be worth the wait.