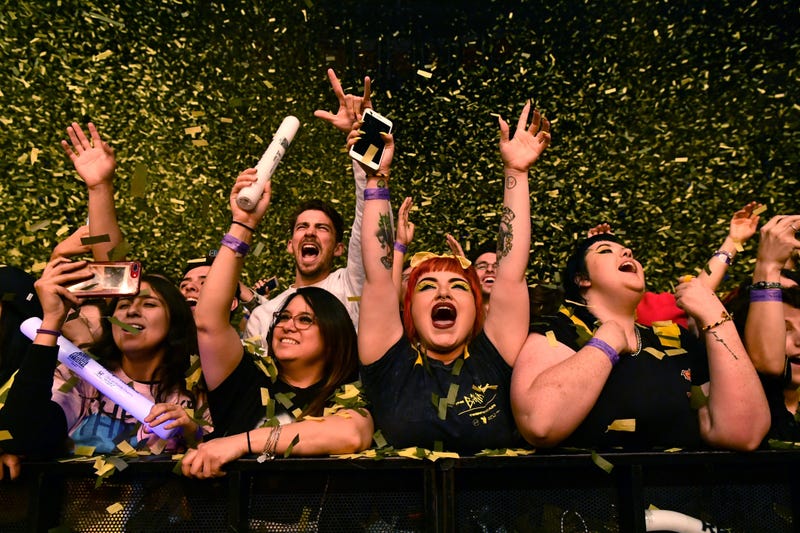 Night Two of the Almost Acoustic Christmas could have been tame. The weekend overall was soggy and Sunday night is usually a tough sell when it comes to partying. However, the sold out crowd at the Honda Center in Anaheim, California not only arrived promptly, but they arrived prepared. Between the line up and the fact that this concert had been gone from Orange County for so long, the second night of the KROQ holiday party felt just like the start of the weekend all over again.

Here are some of the highlights.

Among the songs you wouldn’t expect to hear during a KROQ Almost Acoustic Christmas, Outkast’s “Spottieottiedopalicious” would probably make the short list. That is unless DJ Jeremiah Red and guitarist Rod Castro were handling the tunes. The pair kicked off Night Two and again delivered a 30 minute stint that was as energetic as it was eclectic.

While the name might not be household just yet, Virginia Beach native Matt Maeson has had the kind of 2019 that positions him to be very familiar come 2020. Just this summer, Maeson’s “Cringe” catapulted to #1 on the Billboard Alternative charts and experiencing it live tonight doubled down on why the singer/songwriter is making the kind of waves he is. Songs like “Go Easy” and “I Just Don’t Care that Much” are brimming with the kind of honesty that makes Maeson’s tunes endearing as much as they are entertaining.

Notching the first highlight of the night, lovelytheband managed to throw the Honda Center for a loop by taking on a proper cover of My Chemical Romance’s “Teenagers.” Right before the band blared into the tune, frontman Mitchy Collins quipped with the crowd, “One of my favorite bands just got back together.” Treating fans to a sample of some new music, “Loneliness for Love” proved a to be a promising look at what next year has in store for lovelytheband fans. Before closing out, Collins implored fans to again challenge the stigma of mental health and embrace that the notion that being broken is part of being human. Naturally, the finisher, “Broken” scored big with the entire arena.

Ska in Orange County is kinda like shooting fish in a barrel. However, The Interrupters are far from just another ska band. Fourth wave flag-bearers, the Brothers Bivona and Aimee Interrupter are electric from the second the step onstage. Tipping their hat to the legends, the band emerged onstage to “Ghost Town” from The Specials, before turning the Anaheim arena into a Sunday night rager. Highlight two of the evening happened with the Interrupters really hit fans with a haymaker, performing a ska version of Billie EIllish’s “bad guy” that came complete with trombone. From “Take Back the Power” to the band’s hit single, “She’s Kerosene,” The Interrupters were undeniably infectious.

This Sunday night party just wouldn’t be complete unless there was an accordion in the house. Luckily, Of Monsters and Men came prepared. Peppering in newer selections like “Alligator" and “Wars” alongside singalongs like “Mountain Sound” and “Little Talks” made for a comprehensive set that left fans satisfied and wanting more just the same. It’s important to reiterate that the band is an indie folk outfit that manages to fit in perfectly with power pop and alternative rock. That is a real testament to the talent Of Monsters and Men.

Fans knew it was going to be a big deal when The Raconteurs hit the stage and from the second the guitar on “Consoler of the Lonely” sliced through the arena, the entire place was hooked. Followed immediately by what was likely the third highlight of the evening in “Salute Your Solution,” and technically the band could’ve called it night right then and there. Delivering a set heavy with selections from their Help Us Stranger release, the fans in the stands were treated to masterful meld of soulful rock and dynamic musicianship. Tunes like “Somedays (I Don’t Feel Like Trying)” and “Help Me Stranger” translates best as gourmet Rock n' Roll. Bearing witness that kind of skill was worth the price of admission.

Just how good was The 1975? Right before the band finished an especially charged version of “Love It If We Made It,” frontman extraordinaire Matt Healy had to turn his back to the crowd to applaud the band himself. That’s how good they were. It’s a fair assumption to write that many in the building would give the band Set of the Evening honors. Delivering stellar renditions of “Somebody Else,” “TOOTIMETOOTIMETOOTIME” and “It’s Not Living If It’s Not With You,” it’s a no-brainer as to why the band is universally loved. While Healy is no doubt a hefty part of that appeal, the presentation combined with the quality of the product really just make The 1975 so damned complete. Rounding out their time with “The Sound” this was the kind of pop music set that had the entire house buzzing.

During her introduction of Mumford and Sons, KROQ’s Nicole Alvarez promised that the band would fill the arena with magic. Ms. Alvarez was pretty damned accurate with that one. Opening with “Guiding Light,” there was a sense of optimism that permeated throughout the arena. Everyone was on a high and as songs like “Little Lion Man” and “The Cave’ continued the euphoria, a memorable moment stretched out to become a complete memorable set. Whether it was newer music like “Blind Leading the Blind” or familiar favorites like “I Will Wait” the tone of the tunes seemed to rally the crowd closer together. When a concert can have you lost in your feelings like that, it’s pretty safe to say it’s magical.

A car onstage, a crowdsurfing drum kit, and a performance platform in the middle the audience all come pretty standard with a Twenty One Pilots show. As the emphatic culmination of the Almost Acoustic Christmas, the duo proved colossal with hits like “Ride,” “Heathens,” and “Stressed Out.” It was late on a school night and the first seconds of each selection were completely drowned out by the shrill of the crowd. Even with newer songs like “Chlorine” and “The Hype,” the energy being reciprocated between the fans and the band never dipped throughout. Finishing the job with “Car Radio,” Tyler and Josh rallied the Sunday evening crowd for one last burst of energy, providing what was appropriately the finale highlight of the evening.