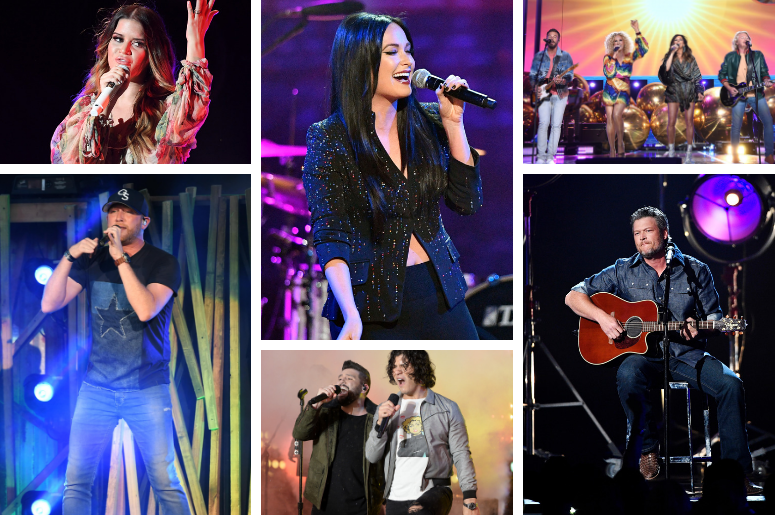 The 61st Annnual GRAMMY Awards will air live from Los Angeles February 10. Prior to the big night, we want you to take a closer look at the nominees for Best Country Song and reflect on these 2018 hits.

While this category is credited to the songwriters, the lyrics have been brought to the spotlight by some of today's biggest country stars. The category includes Blake Shelton addressing a previous lifestyle, Maren Morris taking on a more serious conversation, and Little Big Town delivering one of the most heartbreaking tunes of the genre.

So, without any more delay, here are the GRAMMY nominees for Best Country Song.

Cole Swindell -- "Break Up In The End"

Cole Swindell's "Break Up In The End" was the introduction and lead single to his third studio album, All of It. The 35-year-old's heartbreaking track tells the story of a couple who are well aware it's over before their relationship even began.

Maren Morris' "Dear Hate" is one of the most powerful songs to be released in the country genre. The vocal powerhouse wrote the track alongside Vince Gill with all of the proceeds being donated to Las Vegas nonprofits in response to the Route 91 Harvest mass shooting.

Blake Shelton's "I Lived It" is featured on his eleventh studio album, Texoma Shore. It's not only one of the superstar's stand out tracks, it's also the second single to come from the project while bringing fans a nostalgic look inside a previous lifestyle.

Album of the Year nominee Kacey Musgraves’ intuitive ballad, “Space Cowboy,” is included on the singer’s Golden Hour album. With her lyrics pulling at your heartstrings, the 30-year-old takes a break up to the next level with her bold single.

You've probably heard Dan + Shay's infectious and multi-week No. 1 single “Tequila" just about everywhere you went this past year. The country duo display their stunning vocals on the track which is featured on their self-titled third studio album.

Little Big Town -- "When Someone Stops Loving You"

Little Big Town's "When Someone Stops Loving You" is featured on their eighth studio album, The Breaker. It was released as the third single from their recent project while Jimi Westbrook of the group takes on the lead vocals.