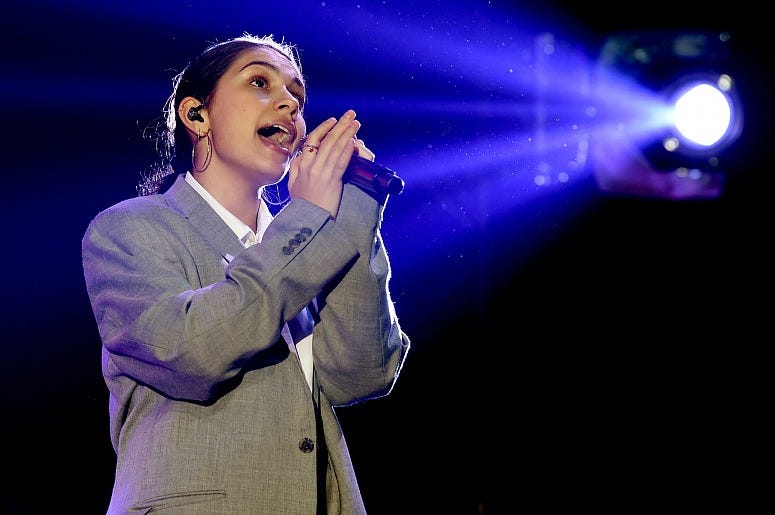 This week we get the sophomore effort from a bright young voice, another bold step forward in alternative rock, and the post-prison opus from one of hip hop's finest. Also there's a classic set for a legendary singer, and an album of collaborations from a country icon. These are the highlights from this week's New Music Friday.

Alessia Cara - The Pains Of Growing

Alessia Cara has released her sophomore album and it’s all about The Pains Of Growing. The fifteen track collection features her two hit singles, “Growing Pains” and “Trust My Lonely.” “I wrote this album, selfishly for me at first, but ultimately for you, in hopes that you find comfort in this music the way I strangely have myself,” Cara shared to Twitter. The 22-year-old has been honest from the very start when it comes to her personal growing pains. Cara wants to remind her fans that no matter what form of pain they are experiencing, she hopes they can celebrate it in the end with her lyrics. - Lauren Hoffman

The 1975 - A Brief Inquiry Into Online Relationships

The 1975 are diving headfirst into synth-pop, unconventional interludes, and incredible artistry with their brand new A Brief Inquiry Into Online Relationships. After opening with the most out-there version of their traditional self-titled opening track yet, the 15-song LP goes on to flow seamlessly between undeniable hits and inventive tunes that’ll have you questioning both the meaning of music and life as a whole. Spoken-word track “The Man Who Married A Robot / Love Theme” feeds off of the album’s title with an unexpected soliloquy while previously released singles such as “Give Yourself A Try” and “Sincerity Is Scary” balance out their welcome escapade into weirdness. The album is expected to be closely followed by Notes on a Conditional Form, a sort of part 2 due early next year. - Tiana Timmerberg

Much will be made about the artists that are along for the ride on Championships, which are noteworthy, but the headline should be the sharpened skills of Meek Mill. He has managed to inject more urgency and energy into his already frenetic flow, sounding shot out of a cannon here, flexing some well-earned grit and emotional depth. Meek has talked in the lead-up to the album about it's East Coast sound, and it's apparent with orchestral-influenced production, and classic samples standing in the center of several beats, calling back a certain style of some of New York's iconic artists. Championships is indebted to hip hop history, and spares no attempt to knock the next generation and the "mumble rap" movement. But what about those guests? Who is here is almost as important has who is not. While Rick Ross, Kodak Black, Ella Mai, 21 Savage, and several others make big contributions, it is the inclusion of Drake, the bars from Jay Z, and the appearance of Cardi B and not Nicki Minaj that will be talked about today. In the end, all of these features assist in an excellent album from Meek Mill, a fitting season finale for the embattled MC. Championships is the victory this long-fought story deserves. - Michael Cerio

Neil Young is taking us back in time to 1976. That’s when he spent much of the year on the road with Crazy Horse, while also doing some acoustic shows. It is those sets that are revisited on Songs for Judy. The 22-track collection features Neil Young standards like “Heart of Gold” and “The Needle and the Damage Done.” It also includes “No One Seems to Know,” which was never available on an official recording before. - Bob Diehl

Who better to provide the soundtrack to a movie about southern beauty than the iconic Dolly Parton? Beginning December 7, Netflix will start streaming the original film Dumplin’, starring Danielle Macdonold as the film’s title character and Jennifer Aniston as Dumplin’s pageant-queen mom. But what we really love about the movie is its soundtrack. Netflix gave the task of producing it to the living legend herself, and Dolly did not disappoint. Recruiting Linda Perry to help produce, six of the 12 tracks are re-imagined versions of Dolly hits, including 1967’s “Dumb Blonde,” 1971’s “Here I Am,” and 1974’s “Jolene.” But what makes all of the previously-released tracks particularly great this go-round is the fierce ladies featured on these classic songs, including Sia, Elle King, Miranda Lambert, Alison Krauss, and more. - Kyle McCann

Also out this week is new music from Jeff Tweedy and Lil Baby.