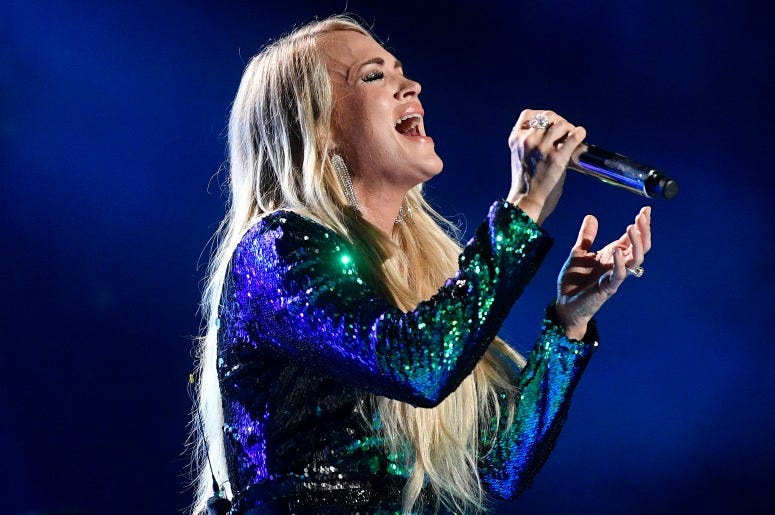 This week we've got the personal return of one of music's biggest stars, a pair of pop punk brothers tackling some big issues, and an Atlanta artist with a smooth flow. Plus one of rock's most iconic voices lends her spirit to some of music's lost souls and a super-producer offers up his seventh album filled with big names and bangers. These are the highlights from this week's New Music Friday.

Fans of Carrie Underwood can officially Cry Pretty with the release of her sixth studio album. The country superstar has delivered her most personal project to date which includes thirteen new tracks. Underwood’s Cry Pretty delivers personal and emotional growth within her lyrics to her fans. The singer-songwriter revealed she wanted to take “more ownership” when it came to her thoughts and feelings as well as her “creative abilities” while working on the album. The 35-year-old co-produced Cry Pretty and continues to shine the light on her powerful vocals. Underwood’s new collection brings us back to her country roots touching on both romantic and sensitive topics. - Lauren Hoffman

Good Charlotte’s Generation Rx is a haunting album that tackles some of the most pressing issues in our country. From drug crises to the separation of immigrant families, the heavy-hitting LP dives into a collection of thought-provoking topics. Switching from their often feel-good pop punk tracks, songs like “Better Demons” take listeners through stories of pain and trauma. - Tiana Timmerberg

GRAMMY nominated singer, songwriter, and rapper 6LACK shouldn’t have to worry about the Sophomore Slump on his latest album, East Atlanta Love Letter. Resting on the success of his 2016 debut FREE 6LACK was not an option for the 26-year-old as his follow-up brings just as much heat. Despite its title though, this collection is not a set of traditional love songs. In fact, the deep, soulful tracks more closely examine those moments after the butterflies fly away and the rainbows disappear – and not just in the human-to-human sense of the word love. Some tracks depict a songwriter struggling with success and his love of the “game.” Throughout the album though, 6LACK's ability to set a mood exists everywhere, especially on the title track featuring some strong verses from Future. Other notable guests include Offset on “Balenciaga Challenge,” J. Cole on “Pretty Little Fears,” and Khalid on “Seasons.” - Kyle McCann

Ann Wilson of Heart has lent her signature snarl to the music of those artists that are no longer with us. Immortal is a collection of covers of songs from Tom Petty, David Bowie, and other musicians we've lost along the way. Wilson is at her best with a different spin on the Eagles "Life In The Fast Lane" and a powerful, mature and war-torn cover of Amy Winehouse's "Back To Black". The album is released on the same day that would be Winehouse's 35th birthday. "These are the poets of our time and their expressions must be handed down" Wilson says in a statement. "Poetry is lasting and elemental like carvings in rock.” - Michael Cerio

Also out this week is new music from Willie Nelson, Tori Kelly, and Thrice.