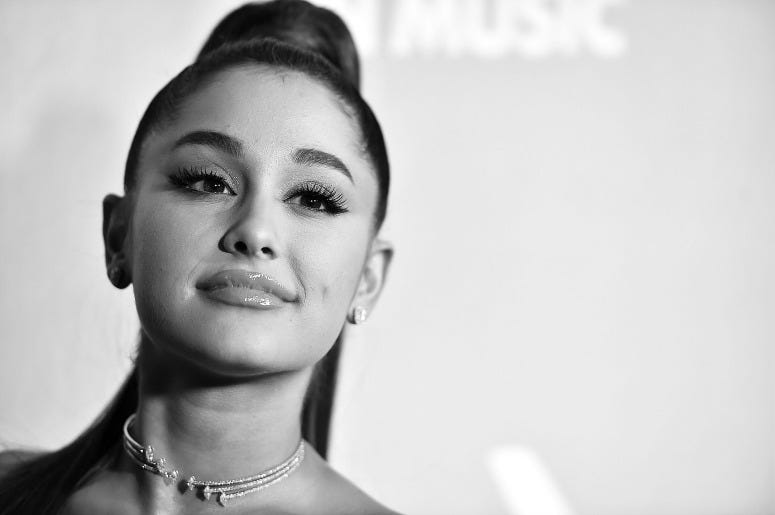 For the second time in six months, all eyes are on an album from Ariana Grande. The biggest pop star on the planet headlines this week's new releases, along with an inspired soundtrack, a sweet taste from a supreme singer, and a collection of atmospheric alt-rock from Kentucky. These are the highlights from this week's New Music Friday.

Ariana Grande - Thank U, Next

Ariana Grande has become the biggest pop star on the planet. It's a thing that happened through extraordinary events, inviolable talent, and a better understanding of the cultural landscape than most. She has become a heroine, rising above her greatest obstacles and slaying a series of events with wide-eyed wonder and empowerment. In a way we all hope to face our adversity like Grande has, the ultimate example of "living well is the best revenge", standing strong against loss, heartbreak, and international incidents with a fractured fortress built on self-love. In all the ways that Sweetner was a reclamation of strength, recapturing the light after the darkness of Manchester and celebrating new love, thank u next feels like a further dive into Ariana's relationship with herself, exploring her own soundness and force, taking back any power ever exchanged in the relationships of her past. Even in songs about others, it's clear the orbit surrounds Grande and her own prowess. Grande has emerged with fresh sass and swagger, refusing to be a part of the narrative. Instead, on thank u, next she crafts her own headlines, tweets, and memes into futuristic R&B, borrowing from the past but injecting a healthy Hip Hop bravado. These are songs born of the moment for Grande, and offer a revealing look at her own persona. It's flirtatious and blunt, wounded but strong, but above all authentic and exquisite. - Michael Cerio

Taking a cue from the textures of the film, Music Inspired By The Film Roma is an atmospheric collection, curated by director Alfonso Cuarón. These songs find a place inside the journey of Roma, from the pacing waves within Billie Eilish's "When I Was Older" to the climbing strings on Beck's "Tarantula", unique in their sound and style but all containing the thread of the Oscar nominated film. Jessie Reyez, DJ Shadow, and Laura Marling also contribute. - Michael Cerio

Kentucky alt rockers Emarosa are back with their first release since 2016’s 131. Peach Club is a wonderfully nostalgic and groovy title for the new, 11-track album that sounds like the soundtrack to a neon pink, ‘80s pop-playing beach hangout. Opening with previously released singles like “Givin’ Up” and “Don’t Cry,” the band delivers an upbeat sound colored by Bradley Walden’s masterful vocals, horns, and synth. While moving away from the more rock-leaning sound of their past discography, the band is still embraced by the post-hardcore community and comfortable opening for heavier bands. “We know, we’re too heavy for some of you” the band often jokes before stringing pop songs into their set. Peach Club is a perfect transition into their new sound.  - Tiana Timmerberg

Meghan Trainor has created a soundtrack for her current head space with her new EP The Love Train. Less than two months after tying the knot with Daryl Sabara, the singer has dropped a 6-song set that includes the bouncy “All the Ways.” The 25-year-old gets the reassurance she’s looking for when she pleads: “If you love me, love me, love me like you say. Darling, tell me all the ways.” And that’s before we even get to “Marry Me,” the song Trainor actually walked down the aisle to at her wedding. Trainor’s father also makes an appearance of the final track, “Good Mornin.” The fun, upbeat and optimistic The Love Train should be enough to hold fans over until Trainor releases her delayed LP Treat Myself. - Bob Diehl

Also out this week is new music from LCD Soundsystem, Bob Mould, and Panda Bear.