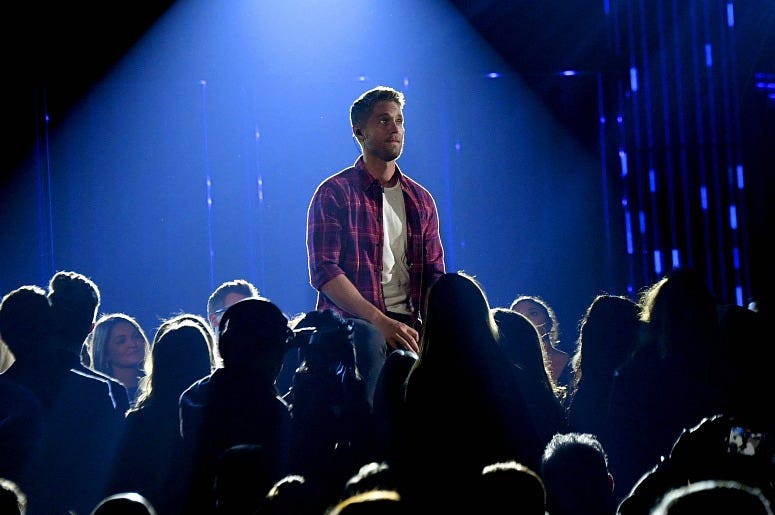 This week we have some SoCal Country, a new album from an Atlanta trap pioneer, and another impressive entry from one of music's finest performers. Plus, an Alt-Rock return and a Hip Hop icon's long-awaited release. These are the highlights from this week's New Music Friday.

Brett Young is taking a Ticket To L.A. with the release of his sophomore album. The breakout country star’s new project features thirteen brand new tracks which were all produced by Dann Huff. While the 37-year-old continues to take fans into his personal life, he admits they have a lot to explore while listening to this collection. Young revealed that he titled the album Ticket To L.A. due to the fact that flying home is now a big part of his life while touring. Young co-wrote 10 of the tracks featured on Ticket To L.A. including the lead single, “Here Tonight.” It follows his four straight Platinum-certified No. 1 singles. - Lauren Hoffman

It is amazing what a few extra months in the lab can create. Last year after dropping his 12th studio album, Gucci Mane was already talking about his next. That's not uncommon in the rapid release world of Hip Hop, but taking the time to craft Evil Genius to be his best and most reflective might be. "I've been really working on the songs" Gucci told Billboard last year. "I'm trying to make this project one of my best projects ever. I'm really trying to collaborate with the best producers and make sure I give my fans something that they can be like, 'Ok, Gucci still coming hard. He still passionate about the music.'" The result is a more polished, diverse effort from the trap trailblazer. The hallmarks of drugs, money, and women are everywhere, but Mane is more melodic than ever and certainly more selective with the beats he boasts over. Lil Yachty, Migos, 21 Savage, Bruno Mars and more are there in support, but the standout is still Gucci's flow and effortless style. He's more genius than evil on this album, but definitely in fine form. - Michael Cerio

Van Morrison’s new LP The Prophet Speaks has 14 tracks on it, but the key number is 40. That’s how many studio albums the Irish singer-songwriter has now released. Morrison has never been tied to any particular genre, and he’s not starting now. He pays tribute to the blues and soul portion of his roots on covers of John Lee Hooker, Willie Dixon, and Sam Cooke. “It was important for me to get back to recording new music as well as doing some of the blues material that has inspired me from the beginning,” Morrison said of the The Prophet Speaks. There are also six brand new Van Morison tracks here. The title track, along with “Ain’t Gonna Moan No More” are among those that lean on the 73-year-old’s jazz sensibilities and sound like they’d be best enjoyed in a dimly lit lounge while sipping Irish whisky. - Bob Diehl

AFI are back with The Missing Man EP, a 5-song release that takes their punk roots into their new era with emotion, diversity, and thrashing jams. “Trash Bat” opens the EP with a bang and immediately throws listeners into their world of driving riffs and carrying melodies. Davey Havok shines with powerful vocals lending emotion and character to each track. The old-school AFI style release is their first project since the California band’s self-titled AFI (The Blood Album). - Tiana Timmerberg

Generally speaking, one thing lacking from today’s mainstream hip-hop is dynamic storytelling by way of socio-political rhymes. Which means that Ice Cube finally dropping Everythangs Corrupt couldn’t have come at a better time. The OG’s latest release takes aim at everyone from politicians on the track “Arrest the President,” fellow rappers on “Don’t Bring Me No Bag,” and a familiar target, law enforcement, on “Good Cop Bad Cop.” Cube’s first album in nearly a decade was originally set to come out back in 2015 but got shelved so Cube could focus on his other ventures. Trust us, it was worth the wait. With the current socio-political landscape in the U.S. becoming more and more of a conversation piece, Everythangs Corrupt is the album hip-hop heads need right now. - Kyle McCann

Also out this week is new music from Benny Blanco, LP, and XXXTENTACION.