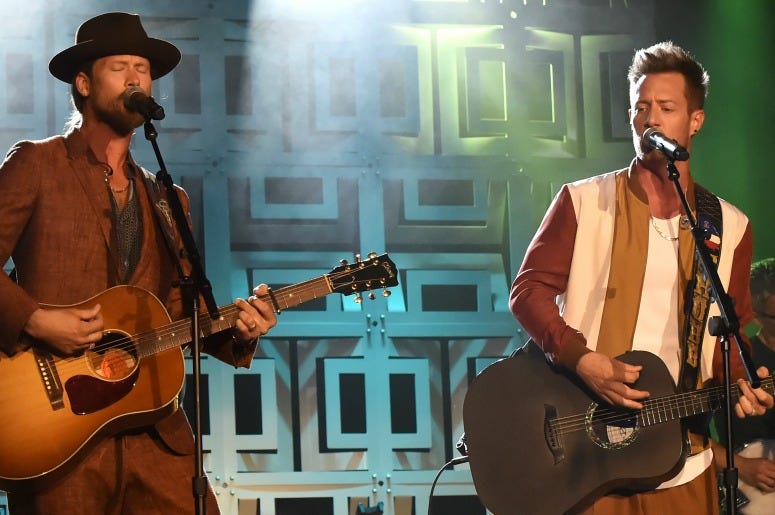 This week a hitmaking Country duo returns, a pop star overcomes, and a musical marriage brings the blues. These are the highlights from this week's New Music Friday.

Country duo Florida Georgia Line are ambitious and adventurous on their brand new Can’t Say I Ain’t Country. Coming as their first album in almost three years, Tyler Hubbard and Brian Kelley play off of the title with 19 tracks that deliver both a traditional country feel and a look into how the genre is evolving. Fake phone call interludes provide comic relief in between songs that overlap into pop, folk, R&B, and beyond. With standouts like the infectious single “Y’all Boys,” the duo creates the soundtrack to a foot-stomping good time. Delivering a playful defense towards people that questioned their direction with pop-crossover hit “Meant To Be,” Florida Georgia Line prove where their roots are with their new album. - Tiana Timmerberg

Head Above Water is the sixth studio album from Avril Lavigne, and to fully appreciate it you have to understand the adversity that it was born out of. The health issues and the relationship struggles that happened over the past five years for the punky pop singer amounted to a heap of hardship, once thought to completely bury her and end her career. Now with Avril left to pick up pieces from almost every angle of her life, the strength that it took to get back up is in every fiber of her new album. Throughout Head Above Water Lavigne summons her strength and her spirituality to take on the troubles in front of her. Sometimes it is clearly about her personal struggle and the obstacles of her health, but more often it is about establishing herself outside of a relationship. She's a "Godess", she's a "Warrior", she's a bird no longer clipped and ready to fly. The message of strength isn't that surprising given the circumstances and the five years that Avril has lived through, but the style and poise in which it is presented is. The trademark pop punk ways of Lavigne have been fully replaced for a mature moment of music, trading crunchy power chords for a string section. It's fitting and genuine. This is a sound that the singer has grown into and a message well earned. - Michael Cerio

While they may not have the pizazz of The Carters, husband and wife bandleaders Derek Trucks and Susan Tedeschi do have the musical chops to go head-to-head with any power couple in music. The blues-driven pair, along with the rest of the Tedeschi Trucks Band members, certainly prove that much on their latest release. The group’s fourth studio album, Signs, debuted today to some seriously high praise.  Besides being musically masterful from start to finish, Signs also guides listeners through the ups and downs of an emotional roller coaster, all with an overarching sense of positivity and spirituality. Some tracks, like “I’m Gonna Be There,” will get you lost in love. Others, like the powerfully honest “Strengthen What Remains,” offer a very real perspective on loss. And with it all, still present is the band’s signature sound - blistering, blues-soaked rock. - Kyle McCann

For the first time in 12 years, the Queen of Funk is back with a new album. Chaka Khan sounds seasoned and soulful on Hello Happiness, still bringing her trademark voice to sensual songs that sound ageless. Khan remains urgent and impassioned, sparkling over updated production but always staying classic with that dynamic sound that has been packing dancefloors for decades. Hello Happiness is a welcomed edition to the Queen's stellar sound and worth a visit. - Michael Cerio

Also out this week is new music from Betty Who, ​Jon Fratelli, and ​India Arie.