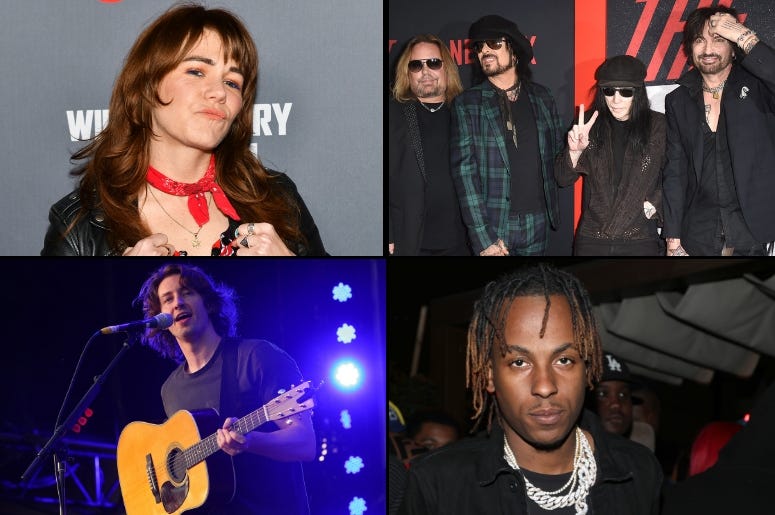 This week a great storyteller returns as an Australian singer is just beginning to find himself. Plus a young rapper turns in his official sophomore effort and the world's most notorious rock band looks back at The Dirt. These are the highlights from this week's New Music Friday.

Jenny Lewis - On The Line

There's an authentically classic sound to On The Line, the fourth solo studio album from Jenny Lewis. Her first LP in nearly five years sounds of a time, not with mimicry or nostalgia, but with a sincere approach to assembly. Recorded at Capitol Records, Lewis continues to flex her talent for storytelling, blending poetry and vivid picture painting. The contemplative pop of her 2014 album The Voyager gives way to more reflective ballads and straight-ahead songwriting for On The Line, as her voice cuts through the haze of sustained piano keys and thunderous drums. Lewis stands at the center of an album that plays well-worn from the first listen, but it also benefits from the fingerprints of others involved. The studio proficiency of Ryan Adams is everywhere on the album, producing 8 of the 11 tracks of On The Line before allegations of misconduct came to light. The others sound obviously born of the eclectic pop brain of Beck, who helmed 3 tracks on the album. Also lending to the timelessness of it all is Ringo Starr, who hops behind the kit on two of the effort's most rattling songs. From the first strums On The Line sounds like an album we've known forever, yet still stands fresh and enthralling. - Michael Cerio

Mötley Crüe signed a “cessation of touring” agreement in 2014, but band members have insisted that didn’t mean they couldn’t make new music again, so they did. The soundtrack of their new biopic The Dirt contains four new songs. “The Dirt (Est. 1981)” serves as the title track and features a rap by Machine Gun Kelly, who plays drummer Tommy Lee in the movie.  “Ride With the Devil” and “Crash and Burn” are both built on heavy grooves and fit right alongside the modern hard rock catalog that Mötley Crüe helped influence. And then there’s the surprising and ironic cover of Madonna’s “Like a Virgin.” The 14 other tracks on The Dirt Soundtrack are basically a greatest hits collection that includes “Kickstart My Heart” and “Shout at the Devil,” but there are also some deep cuts that help tell their story like “On With the Show” and “Merry-Go-Round.” It doesn’t sound at all like we’ve heard the last of the world’s most notorious rock band. - Bob Diehl

Dean Lewis - A Place We Knew

Australian singer-songwriter Dean Lewis is here with his shimmering and warmly indie debut album, A Place We Knew. After grinding away with singles, an EP, and a track that went six times Platinum in Australia, the “Waves” singer is continuing to prove he’s much more than a one-hit wonder. The 12-track A Place We Knew spans from melancholy ballads to optimistic looks into his bright future. “I wanted to make something authentic, raw and hopefully something you can listen to over and over again for years to come,” Dean writes on Instagram of his soaring debut. With standouts like his smash hit “Be Alright” sitting in between tender acoustic grooves like “For The Last Time,” the diverse album shows how he’s found his sound after two and a half years of tunes. - Tiana Timmerberg

Rich the Kid - The World Is Yours 2

A year after his official debut, Rich The Kid returns strong on The World Is Yours 2. Sharp and speedy, the MC cuts up some luxury rap. With bars about checks and the come up, the 26-year-old MC is all energy. While it's fun to watch him come fierce, the best of The World Is Yours 2 belongs to moments that Rich The Kid switches up styles and swims with his features. His flow is woozier when he's trading rhymes with Offset and Big Sean on "Two Cups", and he works with a lighter touch on "Woah" featuring Miguel and Ty Dolla $ign. Takeoff, Lil Pump, Young Thug, and more bolster this big step forward for Rich The Kid. - Michael Cerio

Also out this week is new music from Bad Suns, ​Wallows, and Lucy Rose.