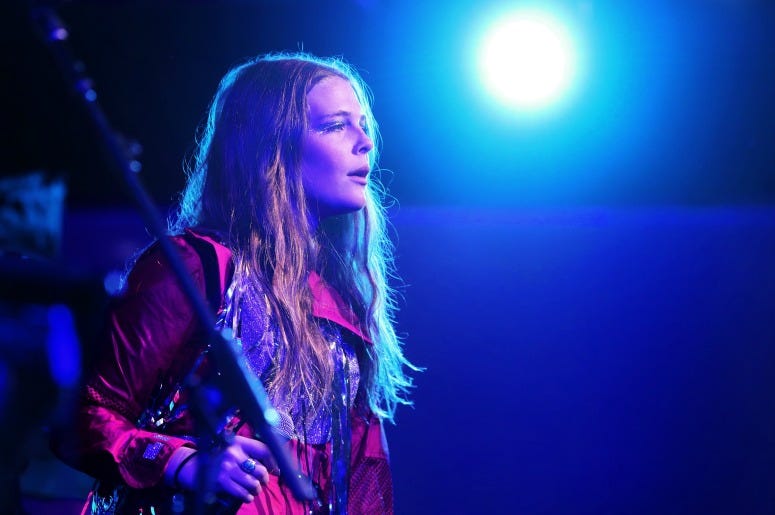 This week a singer-songwriter delivers on her promise, an MC grows on his seventh album, and an acclaimed soul singer cheers up with the help of some heavy-hitting guest stars. Plus, a rock band's evolution and a Country singer stands with the fans. These are the highlights from this week's New Music Friday.

Maggie Rogers - Heard It In A Past Life

Maggie Rogers is glowing and graceful on her debut album, Heard It In A Past Life. Despite the nostalgic title, it’s pretty hard to find any past songs that sound similar to the vocal powerhouse that’s paving her own lane. The 12-track album supports groovy jams like “On + Off” with brand new songs that solidify her energetic and upbeat indie style. Airy vocals filled with effortless vibrato tell stories of past relationships on top of mellowed-out synth beats.  After making a name for herself with 2017 hit “Alaska,” Maggie is coming in even stronger with a polished and thoroughly impressive work that marks her very first LP. - Tiana Timmerberg

Even with an extremely busy 2018, Future Hndrxx Presents: The WIZRD is Future's first studio album since he hit number one twice in 2017, dropping albums in consecutive weeks. Coming off of two mixtapes and the Superfly soundtrack, it seems like he saves his biggest sonic leaps for official studio work. The heart is still the same here, as the darkness and financial flexing of the rap game is his main inspiration. However, The WIZRD conjures up some deeper emotions and flows. Hidden between bars about counting hundreds is some real emotional reflection, with many songs on The WIZRD being a deeper dive than usual into the artist's heart and mind. There are features from Travis Scott, Young Thug, and Gunna, but the spotlight shines solely on Hndrxx here, a wizard who has grown into his own magical ambitions. - Michael Cerio

​Papa Roach - Who Do You Trust?

Iconic California rockers Papa Roach are back! The heavy hitters have been teasing fans since their last release in 2017 with a steady stream of singles off Who Do You Trust? The bands 10th studio album officially dropped today and it’s already taking the rock world by storm. In addition to the socially-woke title track and “Renegade Music,” Jacoby and crew also released “Not the Only One” and "Elevate” earlier this year, both of which feature a slight musical departure from older Papa Roach hits.. but still kick ass! - Kyle McCann

Cody Johnson - Ain't Nothin' To It

Cody Johnson pays tribute to “Cojo Nation” on his major label debut, Ain’t Nothin’ to It. The country singer-songwriter has built a loyal following over six self-released albums, and he wants to make sure his fans are still with him as he takes the next step in his career. “If anybody's gonna get a drunk tattoo and own it; If anybody's got four cinder blocks with a fixer-upper sittin' up on it,” the Texas native gushes on “Y’all People.” Johnson name drops Bruce Springsteen, The Beatles, The Eagles and Jackson Browne on the easygoing lost love track, “Monday Morning Merle.” He goes a step above name dropping when he covers the Charlie Daniels Band’s “Long Haired Country Boy.” “I don’t sing nothing if you can’t see my soul,” Johnson said in a statement. “If it’s ‘Long Haired Country Boy,’ when you see me, you know I can walk that walk, but when we’re playing a gospel song, I want you to know that I feel that, too.” -  Bob Diehl

Also out this week is new music from Mike Posner, Alice Merton, and Jack And Jack.