Rick Ross just scored his tenth top 10 album with Port of Miami 2. It was released earlier this month and debuted at #2 on the Billboard 200.

The new album is packed with 15 tracks and includes features with the likes of Drake and Meek Mill, and there’s also a verse from the late Nipsey Hussle on “Rich N**** Lifestyle.”

Hussle would have celebrated his 34th birthday last week, but Ross did the celebrating for him in the best way he knew how: by playing his music. Ross reminisced about the pair’s friendship with Lucy Lopez and DJ Zog on RADIO.COM station WPOW in Miami.

“I thought about all the collaborations, when we first met, all the discussions we ever had, and that’s what I always loved about Nipsey – he really had a pure spirt, he was real positive,” Ross said. “We never had a negative conversation, we never discussed other artists. It was just always our visions, our ideas, his clothing stores, my beard line, his restaurant, my franchises; how can we help each other.” 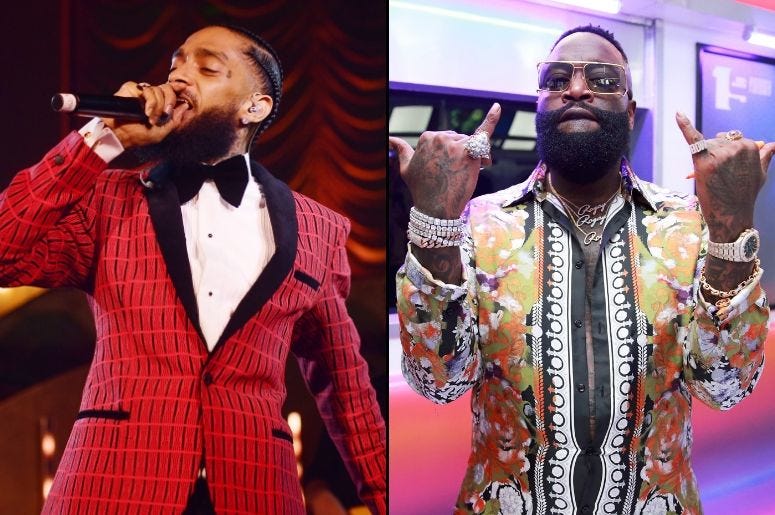 Diving deeper into Port of Miami 2, Ross talked about how he also wanted to make room for younger, up and coming artists – especially those from his hometown of Miami like Denzel Curry - but said they had to earn their way on the album or into his circle.

“It’s not about who’s the most popular, who dress the coolest. No, when they come across my table – I just want to know who the dopest is and who wants it the most,” Ross explained. “I love to stay around young, hungry artists. That’s why you see young photographers with me, young street team... It’s all about giving that next generation an opportunity.”

Is Rick Ross a Clone? Is he a nice guy? Who is Romantic Ross? Which local artists made the cut? Ummm.. no really is he a clone? Get ready to get bossed up in the video above!!