The future of pop is female, and the future is now.

The reigning women of pop music 2019 - Taylor Swift, Billie Eilish, Camila Cabello, Lizzo, Becky G and a surprise appearance by Halsey - came together for the 7th annual We Can Survive concert at the Hollywood Bowl Saturday night, thrilling a sold-out crowd and raising money for the American Cancer Society to battle breast cancer.

>>SEE WE CAN SURVIVE PHOTOS HERE<<<

It wasn’t strictly ladies night: the Jonas Brothers and Marshmello rounded out the bill showcasing the biggest hitmakers of the year going toe to toe with back to back sets. 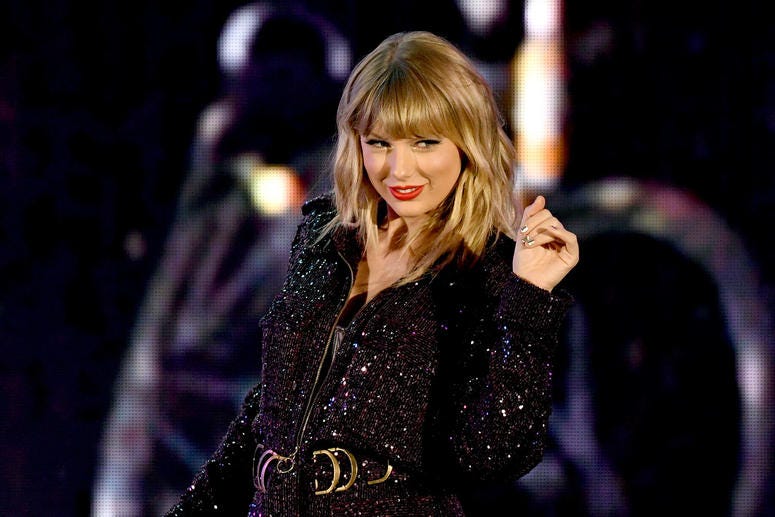 Headliner Taylor Swift scaled down her massive Lover stadium show to fit the confines of the Hollywood Bowl, walking out to 1989 single “Blank Space.” Charging straight into the title track of the Lover album, the singer took a moment to accept a fistful of custom Taylor Swift money from a fan, discreetly tucking the bills into her top. Calling out the quality and diversity of the show’s lineup, Swift gave it up for the acts that preceded her on the bill. “I think love is equality,” she told the crowd while introducing, “You Need to Calm Down.” Winding up with “Shake it Off” and a dazzling display of fireworks over the stage, Swift shut down the night in grandiose style. 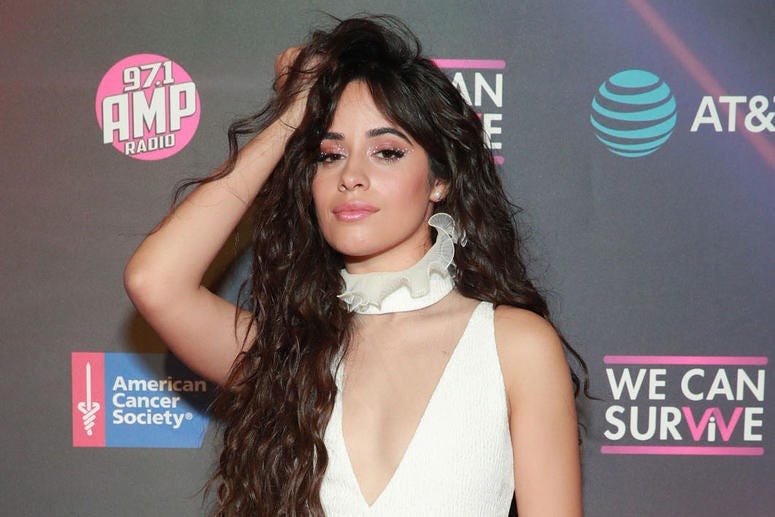 Camila Cabello appeared onstage in dramatic fashion, featuring an extended intro highlighting the live band and cast of dancers before Cabello herself appeared, singing “Shameless.” The singer kept it coming with emotional tracks like “Never Be the Same,” switching things up with the flamenco feel of “Señorita.” Cabello put the spotlight on her dancers before falling in line to deliver a dynamic version of “Havana.” 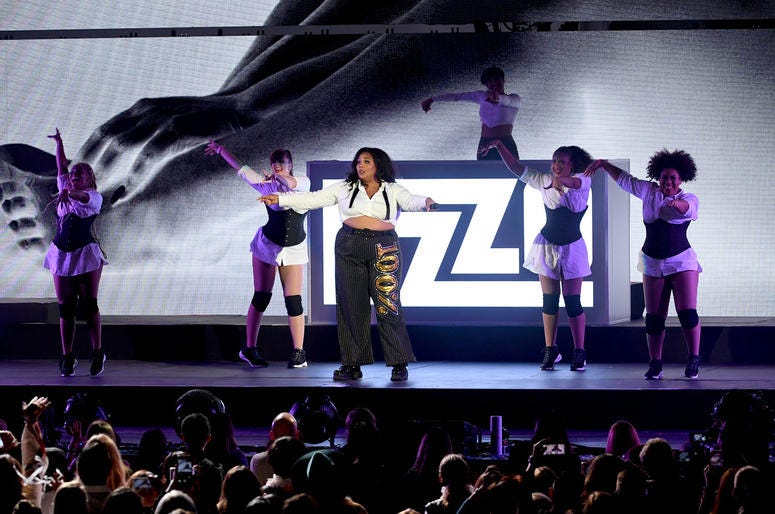 Much like Billie Eilish, Lizzo’s place in the pop culture landscape elevates her beyond just a music sensation. Showing off her vocal chops with the torchy opening number “Cuz I Love You” and wearing a pair of zoot suit pants with “That Bitch” stitched across the back, Lizzo took the Hollywood Bowl straight to church. Joined by her troupe of “beautiful big girl dancers” and DJ Sophia E, the singer put on a master class in how to move a crowd. Invoking classic soul/R&B aesthetics, a well-placed interpolation of Aretha Franklin’s “Respect” hammered her point home. Preaching empowerment and self-confidence, Lizzo preached a gospel of music being able to change the world. “Your energy is important tonight,” the singer implored, pausing to recognize the cause behind the concert before launching into “Good as Hell.” Lizzo’s famous flute made an appearance during “Juice,” with the artist doing her best Ron Burgundy during the spirited solo. 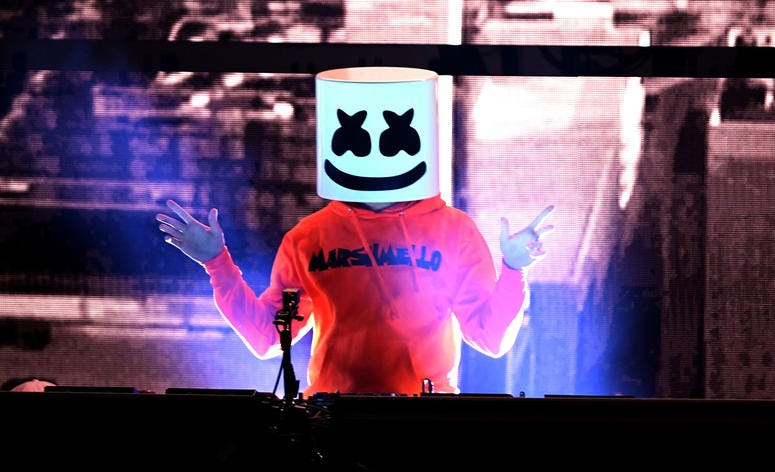 EDM/pop crossover DJ star Marshmello kept the party spirit going, dropping Selena Gomez collaboration “Wolves” to jump-start his set, veering from spine-tingling drum rolls to explosive trap beats, and even getting the entire Hollywood Bowl to sing Journey’s “Don’t Stop Believin’.” A remix of The Killers’ “Mr. Brightside” elicited another singalong, setting the stage for Bastille collaboration, “Happier.” Closing out with Kane Brown country-crossover collaboration “One Thing Right” and buckets of confetti raining down on the crowd, Marshmello’s dance-floor acumen was a perfect fit between Billie Eilish and Lizzo. 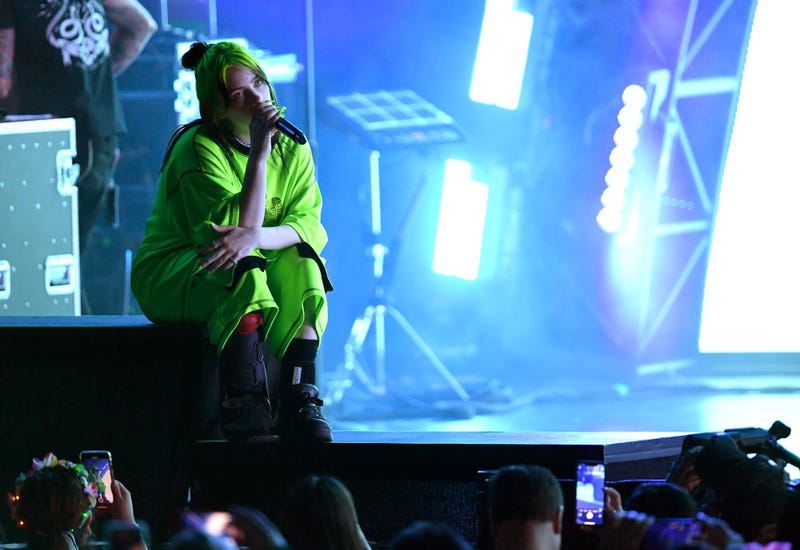 It’s Billie Eilish’s world, and we’re just living in it. The singer and cultural phenomenon raced onto the stage to “Bad Guy,” resplendent in green from her hair to the tips of her manicured fingernails. Charging through songs including “You Should See Me in a Crown” and “Bury a Friend” from her debut full-length, When We All Fall Asleep, Where Do We Go?, Eilish could do no wrong in the eyes of the adoring crowd. Reaching back to the Don’t Smile at Me EP for “Copycats,” the singer’s bouncy energy and high-production stage show lifted the night to ecstatic levels.

Surprise guest Halsey emerged to “Gasoline,” settling down into the rumbling pulse of “Bad at Love.” The singer kicked off her shoes and socks for “Graveyard,” skipping across the stage to the track’s staccato beat. She told the crowd how excited she was to see Taylor Swift, and how the Lover album is her soundtrack for singing in the shower. Halsey also made a point to mention that she’d love to collaborate with Swift on new music. She recruited the crowd to turn set closer “Without Me” into a massive singalong while plumes of fire erupted behind her onstage. 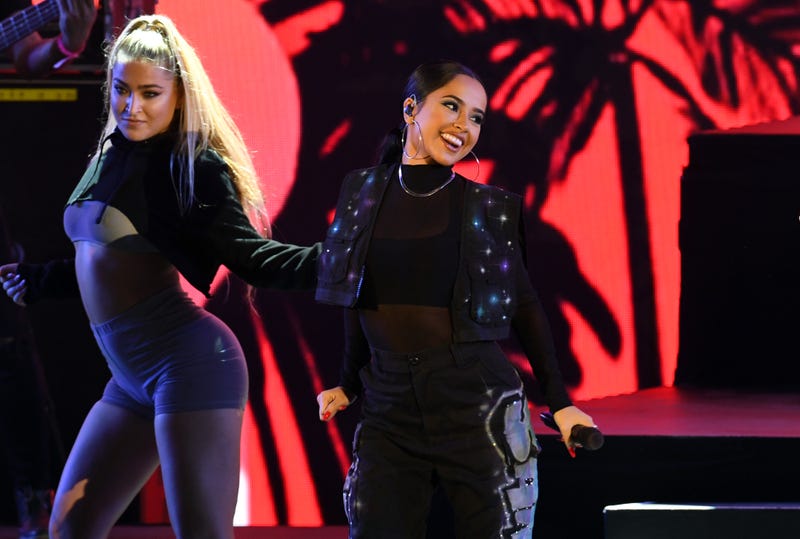 Inglewood, California’s own Becky G repped for her hometown with high-energy choreography and bass-heavy beats with tracks including “Banana,” “La Respuesta,” and “Mi Mala.” Bad Bunny collaboration “Mayores” fired up the crowd before she said goodnight with “Todo Cambio.” 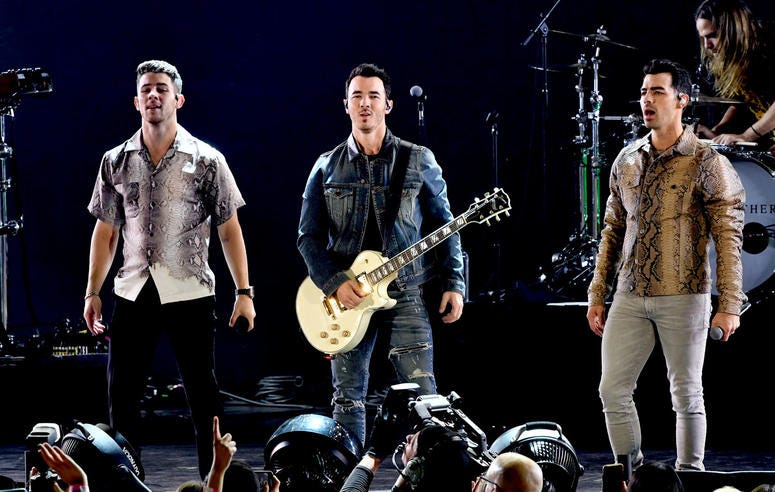 The Jonas Brothers brought their post-boy band pop-rock to the proceedings, going back in time to open with “Year 3000” and “S.O.S.” before shifting gears to roll out reggae grooves from the recently released Happiness Begins full-length. The guys kept it short and sweet, noting that they’re headlining the Hollywood Bowl over the next two nights before offering up a double-shot of “Lovebug” and “Burnin’ Up.” 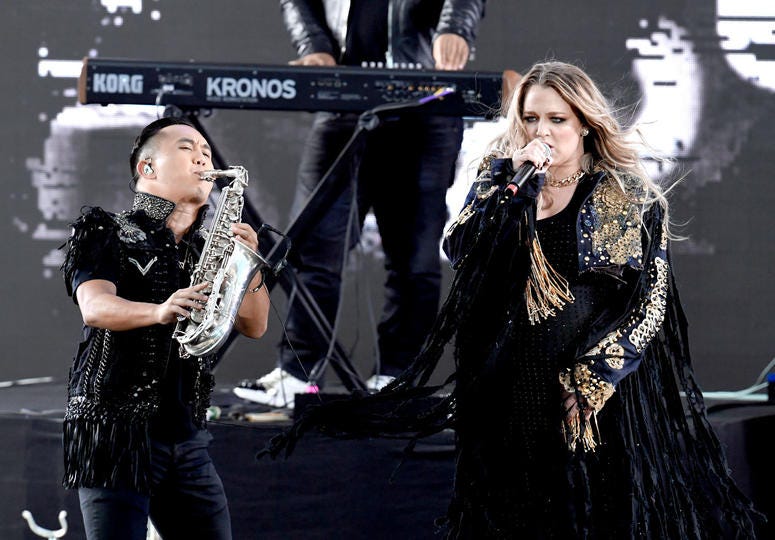 RADIO.COM Opening Act competition winners Rainne topped over 14,000 competing artists to earn their slot kicking off the show. Singer Annie Dingwall lead the band through a sultry blues-rock take on Madonna’s “Like a Prayer” featuring a blistering saxophone solo from her partner in the group, Justin Kirk, who’s done time on the road with Ariana Grande. The group cranked up the classic rock vibes to close out with the original track, “Psycho Killer.”