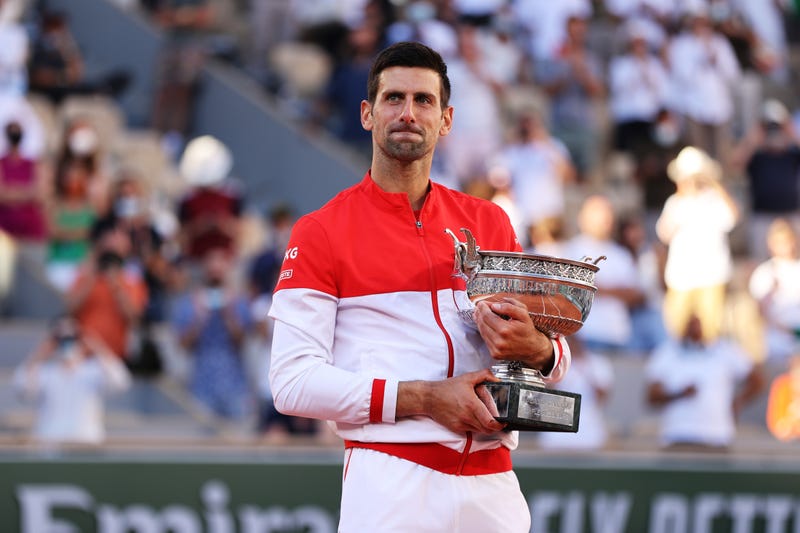 Novak Djokovic might not yet be considered the greatest men's tennis player of all-time or his era. But on Sunday afternoon, he strengthened his case and accomplished a feat that his rivals, Roger Federer and Rafael Nadal, haven't.

By rallying past and defeating Stefanos Tsitsipas in a five-set match, 6-7 (6), 2-6, 6-3, 6-2, 6-4, to win the 2021 French Open at Roland Garros, Djokovic, 34, became just the third men's tennis player to win each of the four major tournaments at least twice, joining Rod Laver and Roy Emerson. It was Djokovic's 19th career Grand Slam title, and he's now one major trophy shy of tying the all-time men's record of 20, which is shared by Federer and Nadal.

New York Times tennis correspondent Christopher Clarey, the author of a new book titled, "The Master," joined After Hours with Amy Lawrence on Monday to discuss the French Open and the legacies of Djokovic, Federer, and Nadal.

"These guys, it's like having LeBron, Michael Jordan, and Kareem all playing at the same time, basically," Clarey said. "I don't believe you can pick the greatest player of all-time. I think it's just too hard, because the early years of tennis, they just didn't get a chance to play many Grand Slams and it was just a whole different situation. A guy like Bjorn Borg hardly ever played the Australian Open, so you can't really compare the numbers, necessarily. But these guys [in Djokovic, Federer, and Nadal], in the Open era, looking apples to apples, it is an unbelievable situation.

"Because these guys have all pushed each other. They are all complete players. They've taken the game to new places, each one of them in different ways. And I think it's been kind of this chain reaction. I've interviewed them all a lot -- I've had the fortunate chance to do that over 20 years of covering them -- and they're all different people. They all have different ways of going about their business and managing relations with people and how they structure their games.

"I mean, Nadal practices like a demon. Roger does it pretty cool and easy. Novak comes from nothing, a war-torn country, was basically down to his family's last 50 dollars on their kitchen table at one point in their lives. Roger and Rafa both come from middle-class families, fairly affluent and had comfortable childhoods. So, very different situations. But they all share that inner-drive, and they all share that ability to lift themselves and find new ways of reinventing their games, and the way they play it and finding new sources of inspiration. So, I think that's the common thread..."

The entire conversation between Clarey and Lawrence can be accessed in the audio player above.