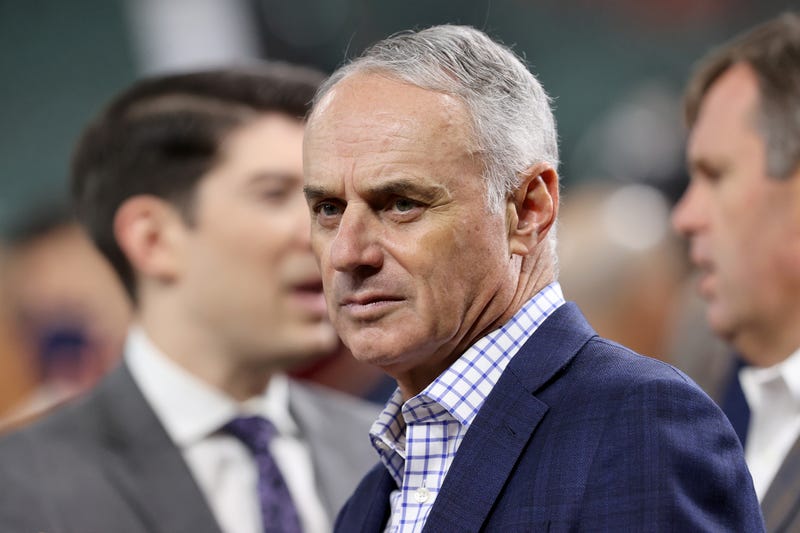 Major League Baseball and the players union continued their bargaining talks earlier this week during the league's GM meetings in San Diego, according to a report from The Athletic.

Whether or not the conversations were constructive, MLB's current collective bargaining agreement (CBA) is set to expire in exactly three weeks, on Dec. 1. If a new deal isn't reached by then, both sides will have to brace for a lengthy and contentious work stoppage. A lockout means that all traditional offseason activities will come to a halt.

"It's kind an eerie feeling to know you're going to be packing your bags or not showing up to the ballpark to do something you love," former MLB infielder Geoff Blum told After Hours with Amy Lawrence on Thursday. "You've got a commissioner in Rob Manfred who, I don't think I would be putting it too mildly to say he has disdain for the players. And I don't think the players have too much respect for what Manfred's done over the course of his tenure...

"I hope both sides understand the game's in a great place... It's fresh in these guys' minds, both owners and players, what it's like not to have baseball and how frustrating, disappointing it is as a player. And the same way, the owners recognize, when there's a work stoppage -- whether it's a pandemic, lockout, or strike -- nobody's getting paid, and that has a tendency to force the issue to have a conversation that you don't necessarily want to have."

On Wednesday afternoon, MLB Network insider Jon Heyman reported that a management source told him negotiations between the owners and players are "as bad as I've ever seen it," and predicted "two-and-a-half months of pain" for the sport.

Baseball lost revenue during the pandemic-shortened 2020 season, as well as this year, due to limited-capacity crowds at ballparks across the country. Another significant issue is player salaries. According to a story from Forbes, the average annually salary for a player is between $3.6-$3.7 million, and just four years ago, the figure was $4.1 million. A new CBA may drastically alter the game's economic landscape.

Aside from economics, the owners and players will also need to discuss the on-field product, and address pace of play, the use of foreign substances, the implementation of a universal designated hitter, and possible postseason expansion. Baseball's last work stoppage came in 1994, and it cancelled 669 games plus the World Series.

The entire baseball conversation between Blum and Lawrence can be accessed in the audio player above.