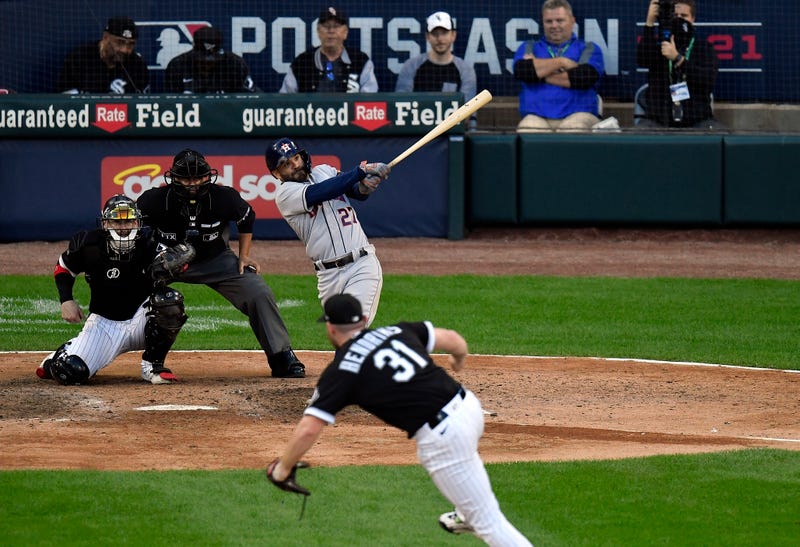 Before the Houston Astros beat up and eliminated the Chicago White Sox in Game 4 of the ALDS on Tuesday, White Sox reliever Ryan Tepera discussed the Astros' sign-stealing past with reporters after Game 3, and implied that they may have cheated during Games 1 and 2 at Minute Maid Park.

"It was a weird thing [for Tepera] to say. And I also think it was interesting that no one else on the White Sox piled on," Astros radio voice Robert Ford told After Hours with Amy Lawrence on Thursday. "That's the other part of it, too. Because if the White Sox really felt like, 'Hey, the Astros are doing something illegal here,' maybe not Tony La Russa, but maybe some of the other players would've said, 'Yeah, we're also seeing this.' But nobody else did.

"You don't want to upset this group. They already play hard as it is. But when they play hard and with a chip on their shoulder -- like they have for a good chunk of the year -- they're really dangerous. And I think we saw that. I think the fact they had those comments, that just added another log to the fire for them... If you're going to say something like that, you better be ready to back it up. And it didn't seem like Ryan Tepera was."

In January 2020, the Astros were disciplined by Major League Baseball after its investigation found that the team used electronics to steal signs during their championship season in 2017 and run to the ALCS in 2018. Houston used a center-field video feed to decode the opposing catchers' signs during home games, and then players banged on a trash can to let batters know what kind of pitch was coming.

Although no Astros players were punished -- MLB commissioner Rob Manfred granted them immunity during the league investigation -- manager A.J. Hinch and general manager Jeff Luhnow were each suspended for one season and then fired in the fallout. MLB also fined the franchise $5 million, and docked four draft picks.

Game 1 of the ALCS between the Astros and Boston Red Sox will take place on Friday night (8:07 ET). According to FiveThirtyEight's projections, Houston has a 61-percent chance to reach the World Series and a 26-percent chance to win the title.

The entire Astros conversation between Ford and Lawrence can be accessed in the audio player above.