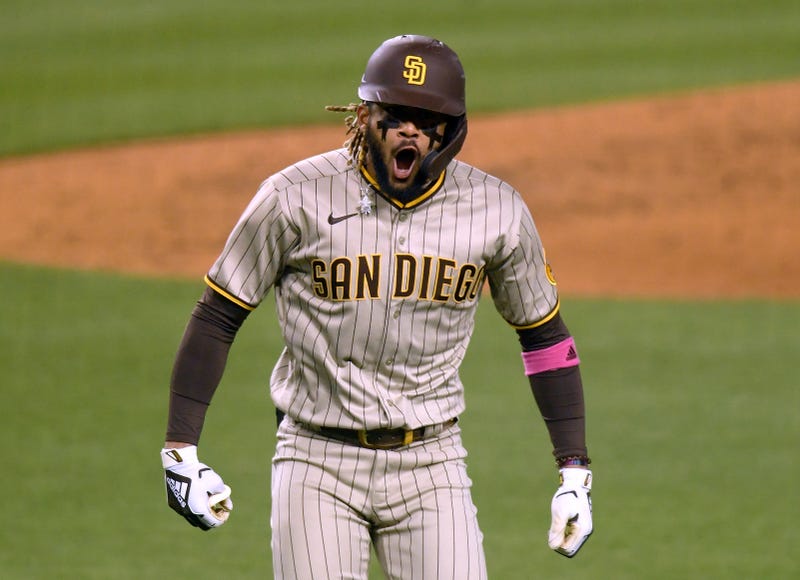 It turns out that April baseball can be rather entertaining when two division rivals ignore the game's tired unwritten rules and play each other with raw emotion and unbridled energy.

Describing this past weekend's series between the Los Angeles Dodgers and San Diego Padres as thrilling would be an understatement. The four-game set at Dodger Stadium was chock-full of tension and postseason-esque drama, and thanks to Padres shortstop Fernando Tatis Jr. and Dodgers pitcher Trevor Bauer, the rivalry reached new heights.

During Friday's game, Tatis hit a pair of solo home runs off the reigning National League Cy Young winner, and while trotting around the bases in the first inning, he placed his right hand over his eye in a subtle nod to Bauer, who decided to pitch with one eye closed when the teams met in spring training. Tatis also mimicked MMA fighter Conor McGregor's classic victory strut once he touched home plate following his second blast.

Following the game, Bauer told reporters that he approved of Tatis' animated celebrations. But on Sunday, he accused the Padres' phenom of stealing signs prior to hitting his second homer, and this led to banter between the two players on Twitter.

"When you actually have rancor, when you actually have... I don't want to say violence, that's not the word. Animosity -- that's good. When you can sit down and watch the Dodgers, and you can sit and watch the Padres for a weekend, and all they want to do is go at each other's necks, I appreciate that," JR said. "How many baseball games can you really sit down and actually say, 'Oh, these two teams don't like each other'? How many teams can you really sit down or games can you watch and feel that there's something to play for?

"Baseball is a slow game in and of itself. Baseball is a self-described pastime, or at least it was -- baseball can't claim to be a pastime when the rest of the world has passed it by. And so when you have youthful exuberance of a Fernando Tatis Jr., embrace it. Use it. Not everybody needs to play the game like the New York Yankees... Let's have some personality. Let's have some fun."

JR's complete thoughts on baseball and Tatis can be accessed in the audio player above.