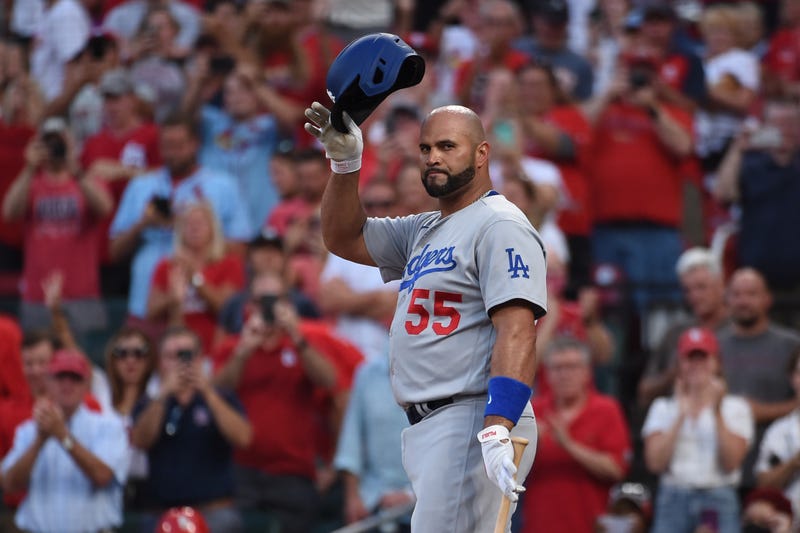 The reigning champion Los Angeles Dodgers will host the St. Louis Cardinals in the NL wild-card game on Wednesday night, and there's a strong possibility that veteran slugger Albert Pujols starts against his beloved former team.

If Hollywood controlled the script, Pujols would be wearing red this October, back in St. Louis where his Hall of Fame career started over two decades ago. But the 41-year-old might want one last chance at a Cardinals reunion in 2022, according to USA Today Sports baseball columnist Bob Nightengale.

"He was disappointed and hurt that the Cardinals didn't reach out to him when he was released by the Los Angeles Angels [back in May]," Nightengale told After Hours with Amy Lawrence on Wednesday. "We'll see if he starts, I don't think he will. But it'd be amazing if he's up in a key situation. One of the all-time Cardinal greats could be hurting that franchise. And who knows, maybe Pujols ends up there next year. Cardinals fans would love to have him back.

"I think he's playing [in 2022], I really do. He's got 679 home runs, and he said the 700 home run club means an awful lot to him. And when you're talking about Barry Bonds, Hank Aaron, and Babe Ruth in that class and that's it, you might as well keep playing. He'd like to play if he gets an everyday job. If he has an everyday job, he's got a chance to hit 21 homers. So, I'd be stunned if he doesn't play next year. I just get that vibe."

Pujols has made the most of his time with the Dodgers -- in a part-time role, he's hit 12 home runs with 38 RBI in 189 at-bats. His presence is even more important now, with All-Star first baseman Max Muncy sidelined with a left-elbow injury.

In 10 seasons with the Angels, Pujols never won a playoff game. His playoff career in Anaheim consisted of just three games. A stark difference to the three-time MVP's tenure in St. Louis, where he won two World Series titles (2006, 2011) across 11 years. When Pujols officially hangs up the cleats, he'll go down as one of the greatest players in MLB history. He currently ranks fifth all-time in home runs, 12th in hits, fifth in doubles, and third in RBIx.

Dodgers ace Max Scherzer will oppose Cardinals veteran Adam Wainwright in the do-or-die contest, with first pitch scheduled for 8:10 ET. According to FiveThirtyEight's projections, Los Angeles has a 70-percent chance to win the wild-card game and a 25-percent chance to repeat as world champions.

The entire baseball conversation between Nightengale and Lawrence can be accessed in the audio player above.