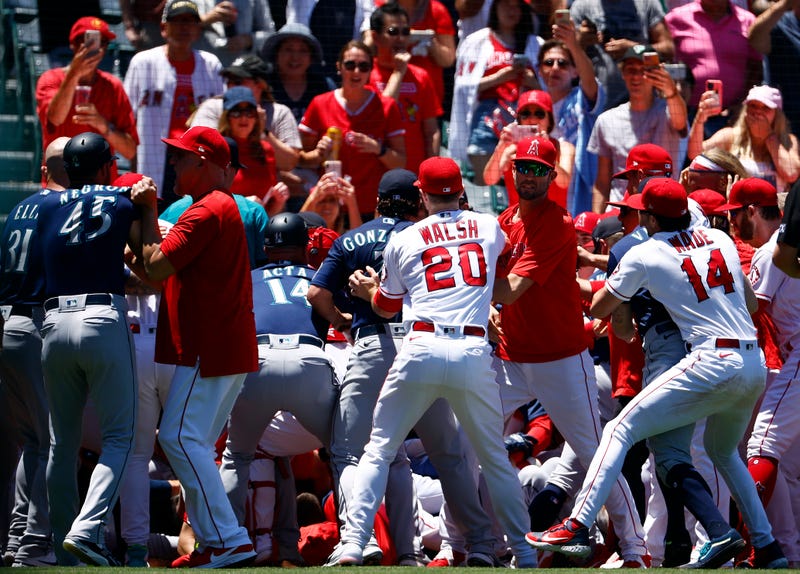 Major League Baseball's most recent brawl between the Los Angeles Angels and Seattle Mariners could've replaced the fictional scuffle that both division rivals ignited in the classic 1988 film "The Naked Gun." Benches cleared in the second inning of Sunday's matchup in Anaheim, when Angels pitcher Andrew Wantz plunked Mariners outfielder Jesse Winker as retribution for a pitch that nearly drilled superstar Mike Trout in the head on Saturday.

The tense brawl resulted in 47 total games of suspensions for a dozen players and coaches, and MLB issued a 10-game ban for Angels interim manager Phil Nevin and a seven-game sentence for Winker. Several cameras caught Angels star Anthony Rendon -- who's currently on the injured list -- throwing jabs with a cast on his right wrist. And when the skirmish ended, Angels reliever Raisel Iglesias hurled the team's supply of sunflower seeds toward Seattle's dugout.

"I thought it was entertaining. Other than that, it's an Angels-Mariners series. How much are we watching for?" CBS Sports MLB reporter Matt Snyder told the Reiter Than You show on Tuesday. "You could say we should be watching for Trout and Ohtani. I agree, but we've been doing that for a while. You could say we should be watching Mariners youngster Julio Rodriguez. I'd absolutely agree, but I still think a lot of people don't know who he is.

"Otherwise, it's an Angels-Mariners game. I don't know how many casual fans were tuning in for it. We haven't heard of any major injuries. Since nobody got hurt, we can say it was pretty funny. Iglesias, running out after he got ejected to throw that entire container of seeds onto the field was absolutely hilarious. I think from an individual standpoint, he made a fool of himself. But it was still really funny to watch. I was laughing and shaking my head at the same time."

The entire MLB conversation between Snyder and Reiter can be accessed in the audio player above.