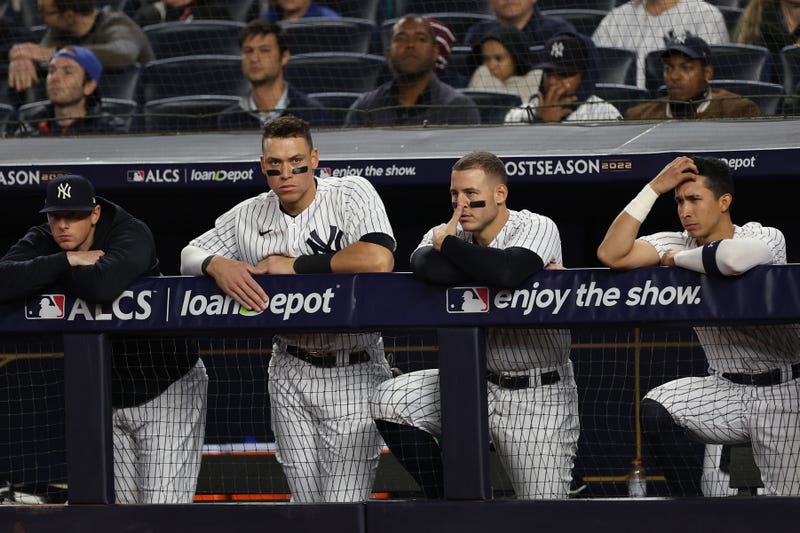 The daunting moment for Yankees fans -- when the Astros stormed the field after completing a sweep in the ALCS -- should've been less surprising than city subway delays during rush hour. Season-long denial about their beloved organization being inferior to the bullies from Houston was met with a healthy dose of reality late Sunday night in the Bronx. Something that should put the bad boys from New York in their place.

Although the Astros won three of their four ALCS games games by a one-run margin, looks can be deceiving. Naturally, coulda-woulda-shoulda games will ensue. But the grim truth is that Houston was simply better. Despite cruising to 99 regular-season wins, that great white shark, lurking in the water, had its prey staked out since the springtime. Houston won the season series against New York, 5-2, and proved which team was the rightful October favorite.

The Astros didn't play their best brand of baseball in this ALCS. But they still beat the Yankees without breaking a sweat. And even when they trailed 3-0 early in Game 4, there was never any sense of panic or doubt they'd stage a comeback. New York averaged 2.25 runs over four contests, and struck out 50 times. Those numbers will never cut it.

The Yankees' season-long issue with generating offense reared its ugly head when the games mattered most. Ironically, their trade deadline punching bag, Harrison Bader, was the most consistent October bat, as he hit .333 with five home runs in 30 playoff at-bats. On the other hand, Yankees superstar Aaron Judge endured one of the worst slumps of his career. His measly .139 playoff average elicited boo birds from the depths of Yankee Stadium.

Just like the frustrating city transit issues that disrupt a New Yorker's regular routine, somebody will take the height of the blame. In this case, rather than pointing fingers at the train dispatcher, operator, or system as a whole, many will be quick to make Yankees manager Aaron Boone, general manager Brian Cashman, or Judge the scapegoat. Instead of blaming a few people, though, it's time to conclude that their collective effort simply wasn't acceptable.

Re-signing the face of the franchise in Judge -- set to enter free agency -- to a massive payday would be the move that makes fans happy. But in a results-oriented business, Cashman and the front office would be wise to ignore the noise and go with the logical move, not the emotional one. He'd be better off letting Mets billionaire owner Steve Cohen open his checkbook, in the hopes of satisfying a restless fanbase that just endured a stunning NL wild-card exit.

A full rebuild isn't necessarily the answer for the Yankees. But an honest look in the mirror, followed by a brutal evaluation of the roster, feels required if this organization wants to make any progress in 2023. As daunting as the sight of Judge playing for the Mets may be, the Yankees' front office would be better off spreading financial resources around -- in the hopes of improving multiple areas of the roster -- instead of re-signing the superstar slugger. Additionally, Judge's struggles in October should raise a major red flag.

Between the massive 2017 sign-stealing scandal and now playing the role of schoolyard bully, the Astros should replace the rival Red Sox as public enemy number one in the minds of Yankees fans. As painful as it may be, there's still a lesson to be learned from the Astros' postseason success. Deep teams win in October. And it's no coincidence that they're undefeated in these playoffs, despite insufficient production from studs Jose Altuve and Yordan Alvarez.

Timely hits from Yuli Gurriel, series MVP Jeremy Pena, and Chas McCormick have defined the Astros' run thus far. And there's no reason to believe these unlikely contributors won't continue to deliver in the World Series against the channeling-magic Phillies. The Yankees can't continue to rely on the long ball from Judge and Giancarlo Stanton. Meaning, they'll need to add pieces, from top to bottom, if they want to contend with this foundation going forward.

A special record-breaking season from Judge at the plate, coupled with their 30th straight winning campaign, is hardly the consolation prize Yankees fans had in mind heading into the season. The fans haven't seen the organization celebrate a World Series title since 2009. And there's little reason to believe the tide will turn anytime soon, too. "It hurts. No one I'd rather do it with than those guys in there. But like I’ve said before, it’s cruel," Boone said last night.

Describing the disappointment of an ugly ALCS sweep as "cruel" puts things lightly. Boone deserves credit for his honesty when assessing the team. But, as the late George Steinbrenner rolls over in his grave, the problems plaguing the once-almighty Yankees run much deeper. Their ALCS beatdown should be a long overdue wakeup call. But, just like New York subway riders' frustrations with widespread delays, the issues at hand will be addressed on a short-term, as-need basis -- oftentimes too late to mitigate long-term anger.

We strive to be a platform where varying opinions may be voiced and heard. The views, thoughts, and opinions expressed by the author(s) of this article and/or by those providing comments are theirs alone, and do not represent those of Audacy, Inc. We are not responsible for any damages or losses arising from this article and/or any comment(s).
Featured Image Photo Credit: Jamie Squire / Staff / Getty Images