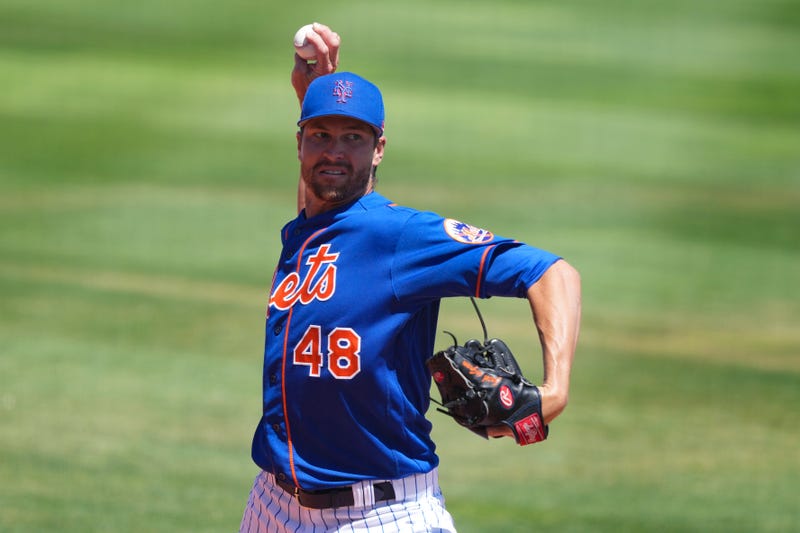 In a business where the only way to truly believe something is possible is to see it happen, results and the reality of a situation always speak louder than words. And although New York Mets ace Jacob deGrom has inched closer to returning from a nagging shoulder injury, his inability to return to the majors at 100-percent gives off the impression that his best bet might be to hang it up for good.

Since being selected in the ninth round of the 2010 MLB Draft, deGrom has established himself as one of the game's best pitchers. In eight seasons at the big league level, he's made four All-Star appearances, won two Cy Young awards, and led the National League in strikeouts twice. He also fine-tuned his nasty changeup while recovering from Tommy John surgery in 2011, with Johan Santana. At the time, Santana was sidelined with a torn left shoulder, and in a similar predicament as deGrom is currently.

As hard as it might be to envision, perhaps deGrom will return to a big league mound at some point this season. Even if he does, thinking it'll last more than a few games is more illogical and irrational than believing a baseball game will be completed in two hours. deGrom hasn't pitched since July 7 of last year, at which point it seemed like the eventual World Series champion Atlanta Braves would be out of postseason contention by September.

Every rehab stint is met with a setback. deGrom has been shut down and re-activated countless times, and each reason for any optimism is countered by another injury aggravation. At 34 years old -- and with 1,261.2 innings already on his seemingly incurable right shoulder -- undergoing surgery could make a return even tougher. deGrom's will and desire is present, but, physiologically, it's impossible to see him returning to his once-unhittable form for a sustained period of time.

The predicament that deGrom faces is eerily similar to one that a former NFL quarterback encountered. Indianapolis Colts star Andrew Luck played a more physically taxing sport, and took an uncanny amount of hits inside the pocket. Then again, repeatedly throwing 100-mph while going 300-percent on every pitch can't be good for the arm, either. Both Luck and deGrom also endured an unimaginably frustrating hamster wheel cycle of injury, rehab, and setback.

Theoretically, the tantalization of what-ifs with deGrom could go on forever. In actuality, the repetitive loop needs to end, and soon. Some might question how much the ace has left in the tank, but going out on his own volition, as opposed to being forced out, is a much better look. It wouldn't be how Mets and MLB fans envisioned the ending of his career. But very few professional athletes retire gracefully.

In the NFL, Hall of Fame quarterback Peyton Manning went out on top after winning a Super Bowl. Baseball players far too often wind up wearing a funky minor league uniform at the end of the line. If deGrom hung up his cleats now, the last image we'd have of him would be in Port St. Lucie and Syracuse Mets uniforms. That's still better than finally making it back to the show, only to go back to the front of the start line.

Mets fans hoping to see their prized possession make a comeback may not want to come to terms with reality -- it's a tough pill to swallow. deGrom and veteran ace Max Scherzer were going to be the lethal duo carrying New York to its first World Series title since 1986. Carlos Carrasco and an overachieving Chris Bassitt add nice depth to the Mets' starting rotation. But getting back to the promised land will require other guys to step up, and fill the void that way. And the temptation of playing the "what if" game with deGrom also provides an unneeded distraction.

What differentiates deGrom's situation from Luck's is that the former Colts stud decided to call it quits during the preseason, before the regular season began. Although deGrom has yet to throw a single pitch in the bigs this year, retiring after the All-Star break would have a residual impact on everyone involved in the postseason push. The first-place Mets' rotation would take a massive hit, which would instantly make life easier for other NL teams.

It's never easy for athletes to throw in their white towel and accept defeat. The competitive nature of pitchers, who engage in a cat-and-mouse game with hitters, complicates matters even further. Only in the curious case of enigma deGrom, just like Luck, retiring would be accepting victory in every sense of the word.