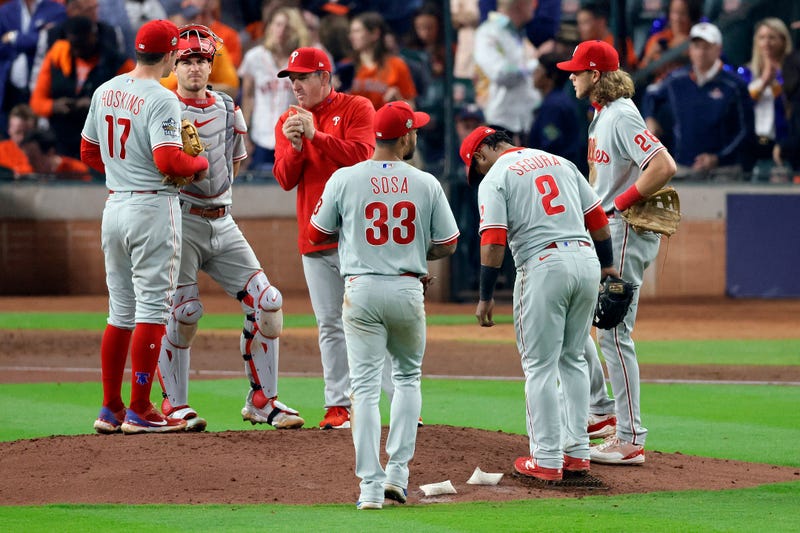 Oftentimes, doing nothing is better than doing something. Facing elimination during Game 6 of the World Series against the juggernaut Astros on Saturday night, Phillies manager Rob Thomson's decision to remove ace Zack Wheeler at 70 pitches was one that'll stick with fans for the entirety of the offseason.

Once some time passes, everybody involved -- players, coaches, front office members, and Philadelphia faithful -- will appreciate the improbable nature of reaching the Fall Classic as an 87-win, NL wild-card team this season. But, for now, the 'what if' associated with Thomson pulling Wheeler for flamethrowing reliever Jose Alvarado will loom large. Why? The Astros are 2022 champions.

Wheeler recorded five strikeouts over 5.1 innings before Thomson opted for a lefty-on-lefty matchup between Alvarado and Astros superstar Yordan Alvarez, with the game-tying run just 90 feet away at third base. And in an increasingly analytics-driven sport, Thomson calling on Alvarado was the sensible thing to do. But, rationally speaking, the move was incredibly puzzling in the moment.

The pair of Astros runners that reached base in the sixth inning came by odd means. Martin Maldonado was plunked as he appeared to hug the plate, and rookie Jeremy Pena -- who was ultimately named World Series MVP -- lined a single up the middle, setting up runners on the corners. Alvarez was also ice- cold at the plate, with two weak popups in his previous two at-bats. To make matters worse, Alvarado drilled Alvarez with the bases loaded in Game 5.

There's no such thing as a guarantee, but Wheeler seemed as well-equipped to record an out as Alvarado. The ace of the staff not only earned the right to make or break the Phillies' season with a one-run lead, facing elimination, but he was pitching well enough to instill belief that he could either preserve their 1-0 lead or minimize the damage. Instead, Thomson's bullpen move backfired, as Alvarez demolished a three-run, 450-foot home run -- over the center field batter's eye.

The Phillies dropped Game 6 because their bats went cold, as they recorded just a single run on three hits. And, in their final three Fall Classic games, they scored three runs on nine hits and struck out 38 times. That type of offensive stagnation seldom leads to wins, and the Astros' pitching stymied the Phillies' hitters in Game 4, with a combined no-hitter at Citizens Bank Park. With clutch production from Pena, Houston received enough offense to make that quality pitching stand up.

Houston was undoubtedly the better team from the get-go. But Philadelphia's ability to take two games in the series -- before coming 11 outs away from that winner-take-all Game 7 -- made accepting Thomson's controversial move with Alvarado that much tougher. Just like giving a mouse a cookie -- which makes them want milk -- the Phillies appeared to believe they were the 2022 team of destiny, after surviving three NL postseason rounds with only two losses. 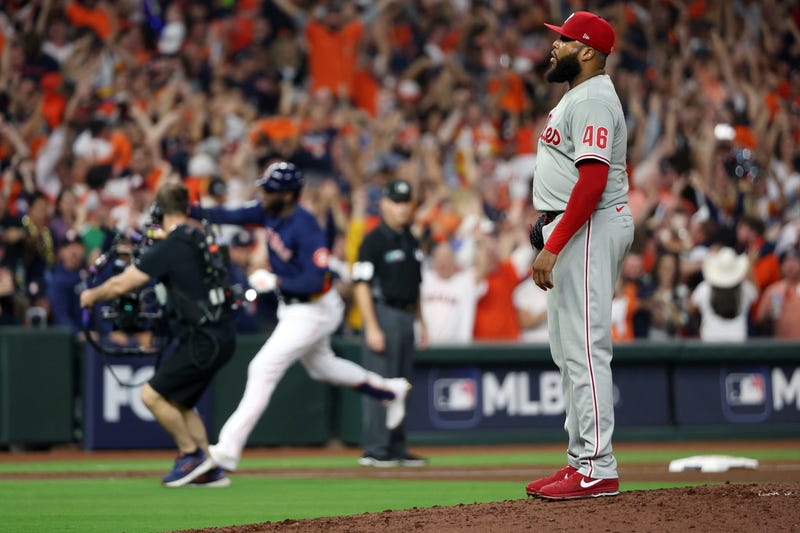 In the heartbreaking moment Wheeler watched helplessly from the dugout, it didn't matter that the Phillies were an 87-win team that snagged the NL's sixth seed by a single game over the Brewers. It didn't matter that making it this far seemed to be a pipe dream when the team canned manager Joe Girardi back in June, replacing him with Thomson -- who seemingly waved a magic wand. Because it felt like the Phillies were capable of more.

What makes the pain even worse is the uncertainty associated with losing the World Series. Theoretically, Philadelphia should be just as strong next season. But, with an aging roster, a difficult division, and a talented National League, it remains to be seen whether the Phillies' core reached their peak this October. Reaching the World Series is challenging, and the Atlanta Braves -- which won 101 games in 2022 -- were pegged as a potential dynasty when they captured the championship without superstar Ronald Acuna Jr. in 2021.

"It's the most fun I've had playing baseball," Phillies catcher J.T. Realmuto said after the disappointing ending. Hopefully, the players embraced October like it was the best stretch of their professional lives. But, the harsh reality is that no roster stays the same from year-to-year. And the disruption of chemistry is the unspoken X-factor that isn't considered.

Had the Phillies been swept or blown out in the games they lost to the Astros, many would've reflected on the 2022 campaign from a different lens. Instead, the tantalization of victory made it that much harder to stomach defeat. While there were many memorable moments from this Phillies run, their sour ending cast a ominous cloud over Philadelphia, leading many to ponder whether their 11-year gap between postseason appearances was really that bad.

We strive to be a platform where varying opinions may be voiced and heard. The views, thoughts, and opinions expressed by the author(s) of this article and/or by those providing comments are theirs alone, and do not represent those of Audacy, Inc. We are not responsible for any damages or losses arising from this article and/or any comment(s).
Featured Image Photo Credit: Bob Levey / Stringer / Getty Images