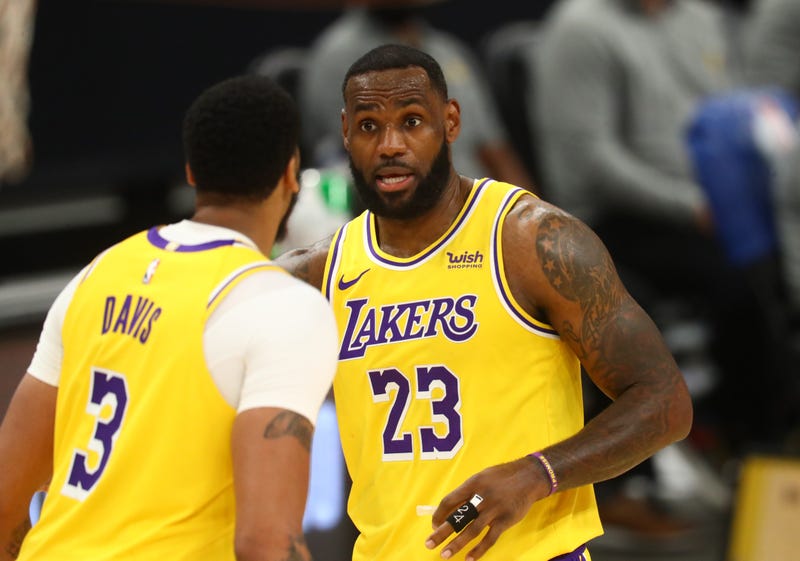 In order for the banged-up Los Angeles Lakers to reach the NBA playoffs and defend their title this summer, they might need to scratch and claw their way past the newly implemented play-in tournament, which begins on May 18.

Is this a tall order? Not exactly. The Lakers expect their dynamic duo of LeBron James (ankle) and Anthony Davis (groin) to be on the court next week. But according to Sam Amick of The Athletic, fans shouldn't count on Los Angeles reaching its desired destination.

"Play this tape back if it blows up in my face. But as of today, I don't know if it'll be deep in the playoffs, in the Finals, whatever it might be, I'm not believing in this group to do it again," Amick told the Reiter Than You show on Friday. "New faces, new pieces, all the injuries. It's funny, I asked [Warriors forward] Draymond Green who he would pick to win the whole thing, and he basically picked Brooklyn, and talked about how even though their three stars have only been together for seven games, if anybody can kind of get over that, it'd be those three guys.

"Well, the Lakers have two guys. They have one guy in AD, who's been up and down this year -- really, really good lately -- and LeBron, I don't know psychically what we're going to be looking at there. So many question marks. I'm not seeing them right now as the defending champs."

The Lakers (40-30), which currently own the West's seventh seed and sit a half-game behind the Portland Trail Blazers for sixth and one game behind the Dallas Mavericks for fifth, have a 12-percent chance to reach the NBA Finals, according to FiveThirtyEight.com's most recent season projections. And their 6-percent chance to win the title ranks fifth-best in the league.

This season's NBA playoff format is different from years past. The top-six teams in each conference are guaranteed a playoff spot, and the Nos. 7-10 seeds qualify for a three-game play-in tournament to determine the final two playoff spots. Full details on the playoff structure can be found here.

The entire NBA conversation between Amick and Reiter can be accessed in the audio player above.

You can follow the Reiter Than You show on Twitter @sportsreiter  and @CBSSportsRadio, and Tom Hanslin @TomHanslin