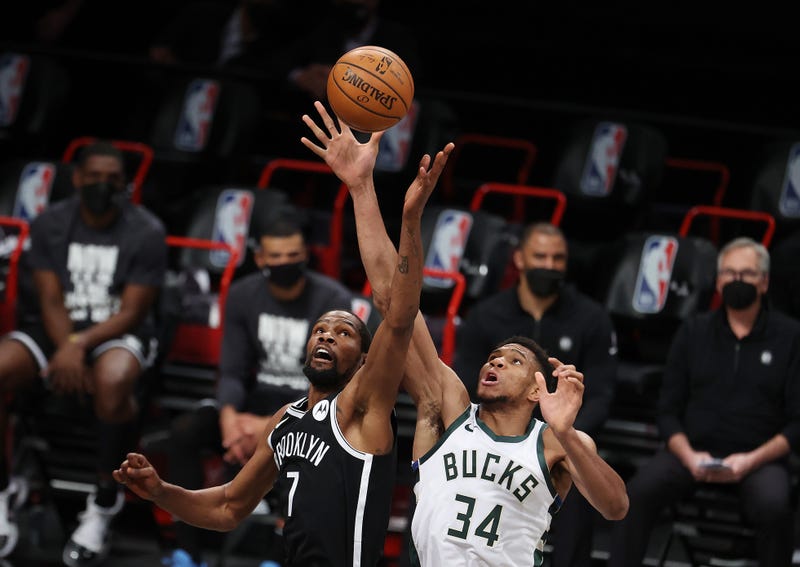 The Brooklyn Nets were able to win their first-round playoff series against the Boston Celtics with relative ease, as the star trio of Kevin Durant, Kyrie Irving, and James Harden combined to score an NBA-record 85.3 points on average in five games.

"Before the postseason started, I picked the Bucks to come out of the East. So, I'm going to stick with that, the Nets might prove me wrong," Beck told the Reiter Than You show on Friday. "I've been a Net skeptic since the moment they imported James Harden, and I remain a bit of a skeptic. And it's not because those three guys aren't awesome -- they are, objectively, obviously, clearly... We have not seen them really challenged. The regular season, we barely saw their Big Three together anyway. We do know that, defensively, the Nets have had some great struggles. And blowing out the Celtics in the first round is not really an accomplishment...

"So, I still don't think we've seen the Nets really challenged, or under duress, or having to find their way out of situations... It's not a knock on them, it's just that chemistry has to matter. The lack of time together has to matter. And maybe it won't. But the theory hasn't been tested yet. The Bucks will test it. The Bucks are really well balanced. They're great at both ends of the court. They're a better team than they were last year, with Jrue Holiday there now. I think they're going to give the Nets everything they can handle. I lean, still, Bucks. I would say Bucks in seven."

Milwaukee won two of their matchups against Brooklyn during the truncated regular season, and during those games, Antetokounmpo, Middleton, and Holiday scored a combined 85.2 points on average.