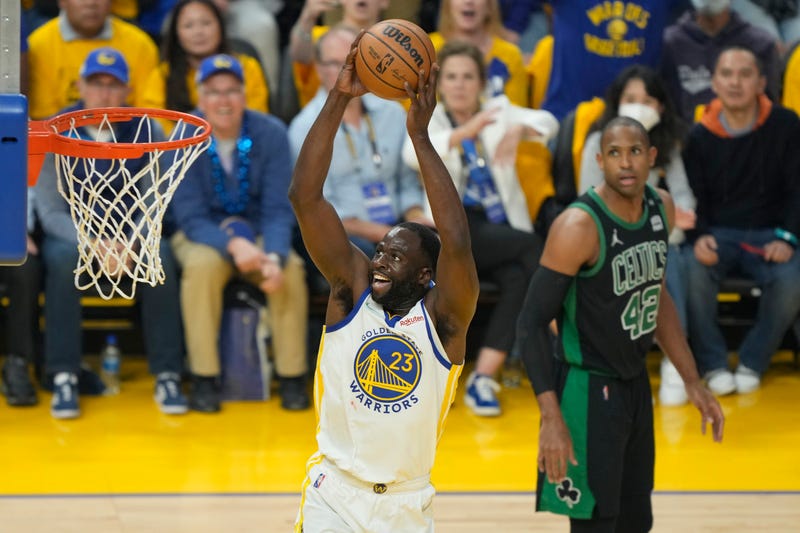 Draymond Green hasn't contributed much on offense during the NBA Finals. In five games against the Boston Celtics, the Golden State Warriors' veteran forward has racked up just 25 points with an underwhelming 34.5 field-goal percentage. But what Green lacks in offense, he makes up for in toughness, and his contributions aren't always represented or glaring on the box score.

Green stepped up as a key facilitator in Golden State's pivotal Game 5 win on Monday, recording seven rebounds and six assists over 35 minutes of action. After the game, Warriors superstar Stephen Curry told reporters that the team wouldn't have reached its sixth Finals in eight seasons without Green playing at "such a high level." And although he's become Boston's latest sports villain, as an unrelenting instigator on the court, Green's grit has been effective.

"He's the one who classified the term '16-game player.' It's not about playing 82 games for the Warriors -- it's about playing 16 games," San Francisco radio host Damon Bruce told The DA Show on Wednesday. "But we've watched the struggles, and watched him play probably the two most difficult games of his '16-game career' when he was in Boston. Seemed he like buckled under the noise that he went out of his way to help create. It's an easy, easy criticism...

"There are a lot of Warriors fans who've officially had their patience tested by Green. And he's the kind of player who does things that drive you crazy, even if you're rooting for him. But, there's always a payoff. It's about having the last laugh in life, and he continues to have the last laugh... He really is a good guy, but he presents himself as such a ruffled feather at all times, he drives people nuts. That's part of the brand, part of who he is... Draymond is a paradox..."

Golden State, which clinched the West's third seed with a 53-29 record, will play Game 6 against Boston on Thursday at TD Garden, with tip-off slated for 9:00 ET. According to FiveThirtyEight projections, the Warriors currently have a 63-percent chance to capture their fourth title since 2015. And if the Celtics hoist the Larry O'Brien trophy, it'll be their league-record 18th in team history.

The entire NBA Finals conversation between Bruce and DA can be accessed in the audio player above.