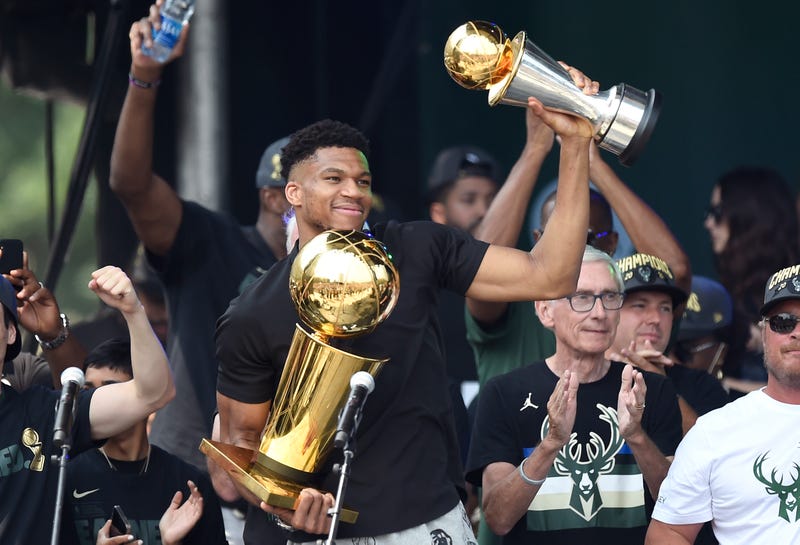 It's appropriate that Giannis Antetokounmpo is now defined by his positivity, and what he is (a champion) instead of what he isn't (a "limited" superstar). His resistance to the criticism that courses through the veins of social media has been refreshing his entire career. The Bucks' star forward has trafficked in applause for Jennifer Lopez halftime shows and trips to the Chick-fil-A drive-thru on his Instagram and Twitter accounts. He does not engage with trolls (ahem, Kevin Durant). He does not flex on haters. He does not call out critics. He keeps it positive, and keeps it moving. No time nor energy wasted on defending himself. He's been a wide-eyed, optimistic, grateful young superstar. He cheered being an American because of Kool-Aid and corn dogs -- and there wasn't a hint of irony.

This is not to say he didn't hear the noise, because after his earth-shaking performance against the Phoenix Suns in Game 6 of the NBA Finals earlier this week, he pointedly reminded everyone he was clutch from the line. "People told me I cannot make free throws," Antetokounmpo said at the celebratory podium. "I made my free throws tonight and I'm a freaking champion. I made them when I'm supposed to make them. I'm joking... actually, I'm not." It was a rare admission that he listened to negativity, although it was not his fuel. That came in the form of improvement, growth, and delivering for a franchise that had believed in him. It came in the form of returning a gift to the fanbase that had swallowed him whole in bear hugs and high-fives. While American superstars use the "chip on their shoulder" phrase so often that it's become cliché, Giannis used a different secret sauce.

He understood there was little to be won by wallowing in the negativity. The Bucks had been the East's top seed the last two years and fell short of the NBA Finals. After their unceremonious dumping by the Miami Heat in the bubble last summer, the label had been gurgled up by the bubbling sewer of negativity. "Chokers. Soft. Pretenders." Giannis was reminded at every turn that his two regular season MVP awards merely meant he was great when it mattered least. Milwaukee may have beaten the Brooklyn Nets in the second-round this year, but Kyrie Irving and James Harden were injured. They may have eliminated the Atlanta Hawks to get to the Finals, but Trae Young's ankle was mush. Sure, the Bucks made it this far, but they were sure to melt when it mattered.

In the first two games of the Finals, those naysayers were fed their 72-ounce ribeyes. Chris Paul and Devin Booker put on a laser light show, and quickly took a commanding 2-0 series lead. "The Bucks will get swept," some howled. "The Suns are unmasking the frauds," or so the narrative went. After an impressive 42 points and 12 rebounds by Giannis in the Game 2 loss, he was ahead of the cavalry. "To win this series, it’s going to be all mental," he said. The key for Game 3? "Keep enjoying playing together. Keep enjoying playing basketball." 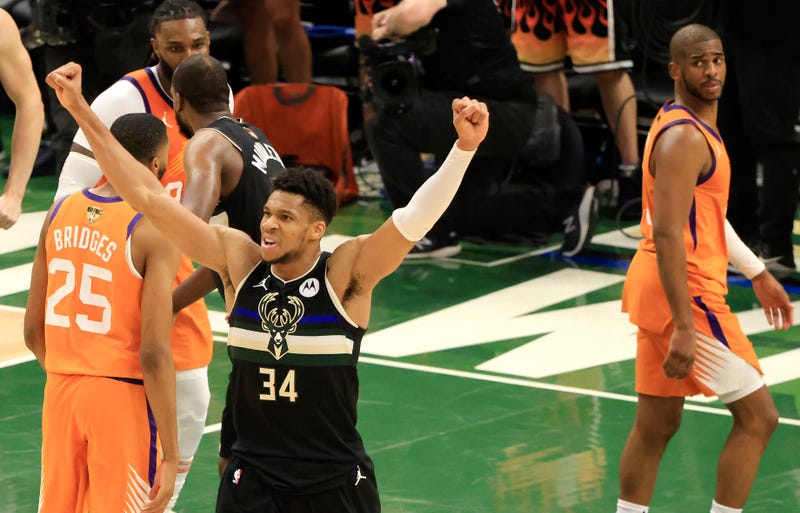 How to do that when criticism is around every turn? Jrue Holiday had two awful games to open the series and was a convenient punching bag all season. The Bucks believed he could be the third piece of a championship puzzle. But most ripped him for not being a truly great option, in a world of superteams. Giannis was asked what he would tell Holiday heading into a defining Game 3. "You cannot get in your feelings. It's hard not to. It's the NBA Finals. 20,000 people booing you. It's kind of hard, but at the end of the day, it's not about me. It's not about him. It's not about Khris [Middleton]. It's not about coach. It's about all of us," Giannis said. "I don't worry about him. He's a great basketball player. He's played great all year. And he's he's going to continue to play great for this team."

Holiday will forever be immortalized by one of the most savvy and gutsy plays in Finals history. In Game 5, his steal of Booker and alley-oop to Giannis was basketball poetry. It stopped the bleeding of a Bucks' blown lead, and put the nail in the Suns' coffin. It was the decisive play in the swing game of the series. It was almost as if Giannis had predicted it, and empowered it. His relentless optimism and refusal to be dragged down by critics had been the beacon the Bucks needed. We are a nation and sports culture shackled by confirmation bias. Unless skeptics have seen it, no one believes it. And there's an army of skeptics around every turn.

The Bucks had never gotten to the NBA Finals, so they wouldn't. They had never overcome losing the first two games of a series, so they couldn't. Giannis had never dominated a clincher, or sealed a series at the free throw line, so it wasn't a possibility. But sports, and life, is a series of firsts. The Cavs had to be the first team to come back from down 3-1 in the Finals. The Raptors had to win the first title in franchise history. The Warriors had to get to their first NBA Finals in 40 years. This is just the last five years, not ancient history. For some reason, we tend to forget this. Our attention spans are short, our memories even shorter.

The Bucks held a parade on Thursday, reveling in their accomplishment. They had brought home the franchise's first trophy in 50 years. They had given this sports-mad city a trunk full of memories, framed still shots, and slow-motion replays to be enjoyed for years. But most of all, they provided a reminder that trudging through the swamp of negativity is not a requirement. You can rise above it and win big, even if you haven't before. Firsts are firsts for a reason.