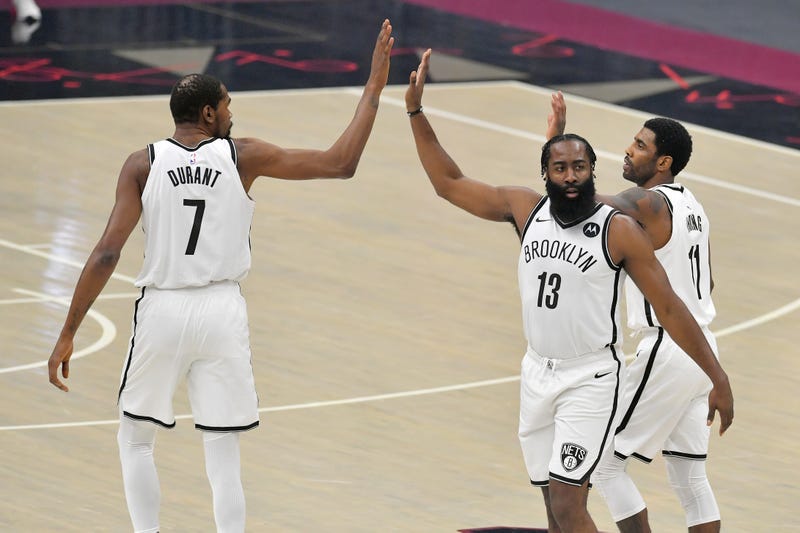 Count on the challenges of attrition following the Brooklyn Nets into the playoffs.

The team announced on Tuesday that star guard James Harden, who's missed the last seven games due to a right hamstring strain, suffered a setback in his rehabilitation and is now out indefinitely. The timing of this news couldn't have been more inopportune, as Nets star forward Kevin Durant -- who had only recently returned to action after missing nearly two months with a left hamstring strain -- exited early from Sunday's game against Miami with a left thigh contusion. He's reportedly day-to-day.

Is it officially time to press the panic button in Brooklyn? Nets play-by-play announcer Ian Eagle joined After Hours with Amy Lawrence on Wednesday to discuss the state of the team with the regular season soon winding down.

"First and foremost, the fact that they are relevant, the fact that they are a focal point around the NBA, that's new territory," Eagle said. "Even when they went to back-to-back Finals in the Jason Kidd era [early 2000s], they never quite grabbed the headlines. This team has certainly gotten everybody's attention, based on the star-power and the intrigue as to whether they're going to go all the way and win a championship. What we do know is, it's really hard to win a title. It is.

"This team will be judged on what they do in the postseason, and of course, you wanted to see the Big 3 with a large sample size, so you could get a sense. Not just the fans, but the coaching staff, the front office -- everybody within the Nets would love to see these guys healthy and see what this team is all about. That's not going to happen. The Harden injury, the setback, now could put him in a timeframe where you don't see him until the first round of the playoffs. And I think the Nets would sign up for that. If the option was, 'Hey, we know for a fact that Harden will be recovered and ready to go from this hamstring injury for the playoffs,' they'll work out their stuff when they need to, come postseason.

"Kyrie Irving has had a fantastic year, and his numbers are through the roof, and he's often doing it without Durant and Harden. He's been the most consistent part of the threesome now, based on the injuries to KD and The Beard. Ultimately, they're going to be fine, as long as those three guys are healthy. I don't think chemistry's an issue. I think that they have a good feel for one another, even in their limited action. But, it raises a lot of questions. And I think it gives a lot of hope to other teams in the Eastern Conference -- Philadelphia and Milwaukee, in particular -- that the Nets could be vulnerable, based on the fact that they just haven't had a whole lot of time together."

Despite the Nets' second place record of 39-19 and league-high 119 points per game, their Big 3 of Durant, Harden, and Irving has only played seven games together since Harden was acquired in a blockbuster trade with Houston back in January.

As a result of the recurring injuries to Durant and the recent setback to Harden, Irving has in fact carried most of the load. The 29-year-old guard leads the Nets in points per game (27.4) and steals (1.3), and ranks second in assists (6.2) and minutes played (35.2).

Durant, Harden, and Irving have all missed at least 10 games this season, and according to ESPN Stats & Info, no NBA champion has ever had all three of its leading scorers (in terms of points per game) miss double-digit regular season games.

The entire conversation between Eagle and Lawrence can be accessed in the audio player above.