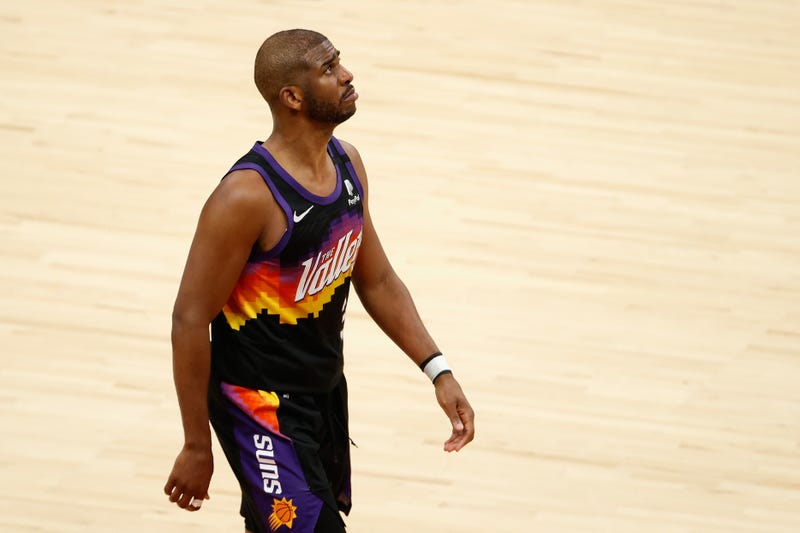 Chris Paul is in danger of remaining a titleless icon, as his Phoenix Suns are one loss away from succumbing to the Milwaukee Bucks in the NBA Finals.

And if the veteran guard wants to avoid losing a league record fourth-career playoff series in which his team led 2-0, he'll have to double his efforts on defense Tuesday, according to former Suns GM and current Audacy insider Ryan McDonough.

"Chris Paul needs to play better, especially on the defensive end of the court," McDonough told the Reiter Than You show on Tuesday. "I look at his numbers from Game 5 the other night, they're pretty good -- he had 21 points and 11 assists. But I don't think he's had the impact, especially defensively, as this series has gone on... He was great in Game 1 of this series. Since then, he's been on a little bit of a downward slide, had a few off-nights mixed in.

"More than anything, I think he still scores. He still gets his assists, as he tends to do. But defensively, he's being targeted by the Milwaukee Bucks, whether he's guarding Jrue Holiday or Khris Middleton. Game 5, in a lot of ways, was the disaster scenario for Phoenix, and Phoenix still played well... But Game 5 was the first time Milwaukee's Big 3 of Giannis [Antetokounmpo], Holiday, and Middleton all played well at the same time.

"So, Paul's going to need to defend better tonight, to try to slow down one of those two guys in the backcourt for Milwaukee. Either Middleton or Holiday needs to have an off-night in order for the Suns to win."

Paul, who's averaging 18.8 points and 8.7 assists for Phoenix in the Finals, can't be thrilled that referee Scott Foster will be the crew chief for Game 6. According to StatMuse, his team has gone 1-12 in the last 13 playoff games officiated by Foster, and Paul's most recent loss came in a Game 3 blowout against the Bucks.

Game 6 at Fiserv Forum in Milwaukee is scheduled to tip-off at 9:00 p.m. ET. The Suns currently have just a 25-percent chance of winning their first title in franchise history, per FiveThirtyEight's projections.

The entire conversation between McDonough and Reiter can be accessed in the audio player above.