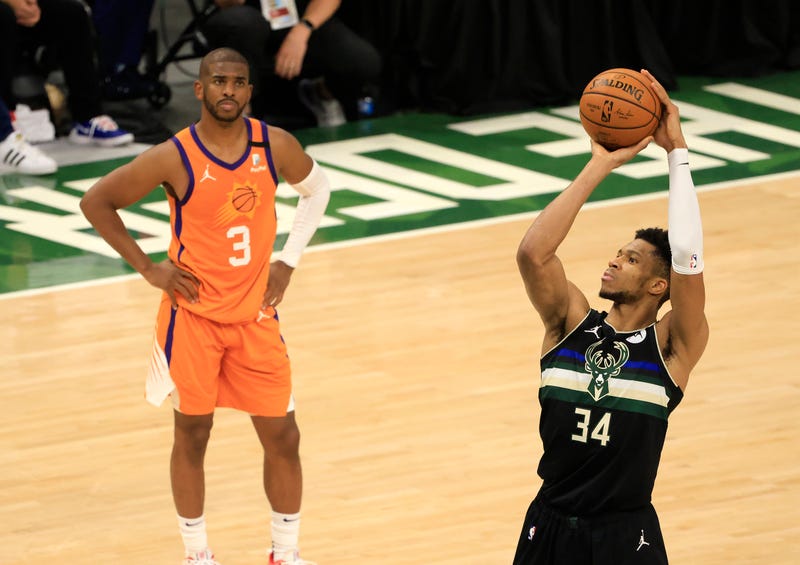 While the Milwaukee Bucks celebrated their first NBA title in five decades on Tuesday night, a new chapter was added to Chris Paul's painful postseason legacy, as the Phoenix Suns' veteran guard became the first player in league history to lose four playoff series in which his team led 2-0.

But did the Suns' devastating Finals loss tarnish Paul's standing among the greatest point guards of all-time? Meadowlark Media reporter and podcast host Tom Haberstroh doesn't believe so. He actually detests the argument.

"I hate it. I hate it. I think it's intellectually dishonest if we're going to point to a player succeeding -- going up 2-0 in a series -- and using that against the player, instead of raising that up as an accomplishment," Haberstroh told the Reiter Than You show on Wednesday. "When you talk about those four series, let's go back. In 2008, he goes up 2-0 against the Spurs with Tim Duncan in his prime and Manu Ginobili and Tony Parker, and he's 22 years old.

"We're going to hold him losing to the San Antonio Spurs in seven games that went down to the final minutes, we're going to hold that against Chris Paul when the second-best player on his team was David West? I just don't agree with the notion that we should pin that on Chris Paul. And secondly, the other two series with the Clippers. Blake Griffin got hurt with an ankle and he was out for the rest of the series. And the other one, Chris Paul got hurt and he was out for the series against Portland.

"So, those are his three right there. One is a Spurs team, where he was 22 years old against one of the greatest dynasties in NBA history. The other two are injury-related... If you want to say that Chris Paul, we should punish him for winning two games in a series, I'm not here for it..."

Paul, who scored a team-high 26 points on 11-of-19 shooting with five assists in Game 6, told reporters on Tuesday that he isn't considering retirement, and the situation with his player option for next season "will take care of itself."

In his 16th season, Paul averaged 19.2 points and 8.6 assists for Phoenix across 20 playoff games. The 36-year-old also led the Suns to their first playoff berth since 2010, and first NBA Finals appearance since 1993.

The entire NBA Finals conversation between Haberstroh and Reiter can be accessed in the audio player above.