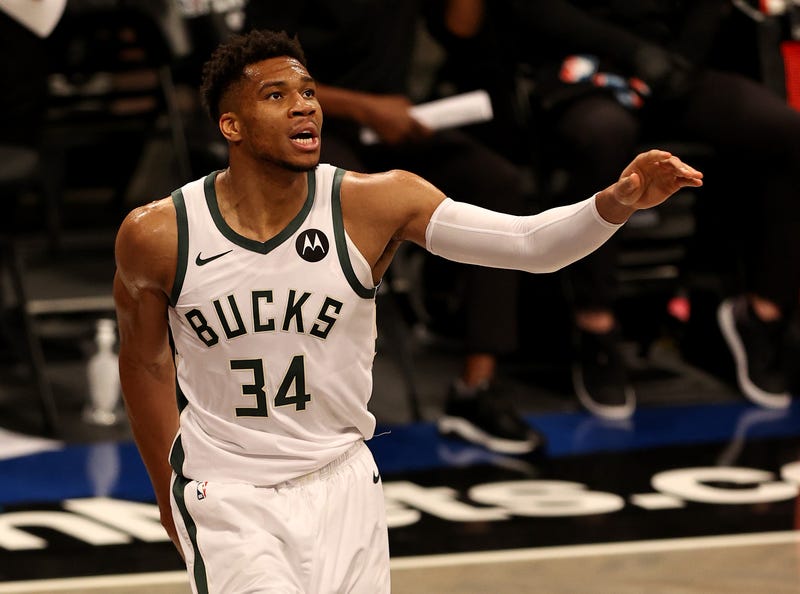 In order for the Milwaukee Bucks -- facing an ominous 0-2 series deficit against the Brooklyn Nets in the East semifinals -- to avoid another disastrous playoff exit, Giannis Antetokounmpo must regain his old, superstar form.

But this might be easier said than done, because Meadowlark Media reporter and podcast host Tom Haberstroh believes the two-time league MVP winner has deliberately altered his style of play and plan of attack.

"I don't think the series is over. I really question what the heck has happened to Giannis Antetokounmpo," Haberstroh told the Reiter Than You show on Wednesday. "Like, when Blake Griffin is stopping you and you're not able to get to the basket... it took a quarter and a half for Giannis Antetokounmpo to get to the rim against the Brooklyn Nets' defense in Game 2. It shouldn't take 18 minutes of action for Giannis, the guy who's built like Shaq in the open court and can get to the rim relentlessly in the regular season. When he's defended by Blake Griffin, it was like all stops. He was settling for jumpers, fadeaways, three-pointers...

"Like, this is a problem. Giannis Antetokounmpo might be afraid to get to the free throw line, and therefore, isn't attacking the rim as much as you might think. And so he's playing soft -- he is... This is a product of them not asserting their size against a small lineup, where Blake Griffin is the center. And I'm very surprised that a lineup like Giannis Antetokounmpo and Brook Lopez have basically done nothing at the basket in this series.

"They need to improve massively here in Game 3 to really establish themselves in this series... I'm not going to count them out entirely. But they have to do some massive, massive soul searching ahead of Game 3, because they are really in an identity crisis right now."

Although Antetokounmpo scored a team-high 34 points on 16-of-24 shooting in Milwaukee's Game 1 loss to Brooklyn last Saturday, the 26-year-old forward was limited to 18 points in the Bucks' 125-86 beatdown in Game 2 on Monday.

Game 3 will take place on Thursday night at Fiserv Forum in Milwaukee, with tipoff scheduled for 7:30 p.m. ET. According to FiveThirtyEight's projections, the Nets currently have an 86-percent chance of advancing to the East Finals for the first time since 2003.

The entire conversation between Haberstroh and Reiter can be accessed in the audio player above.