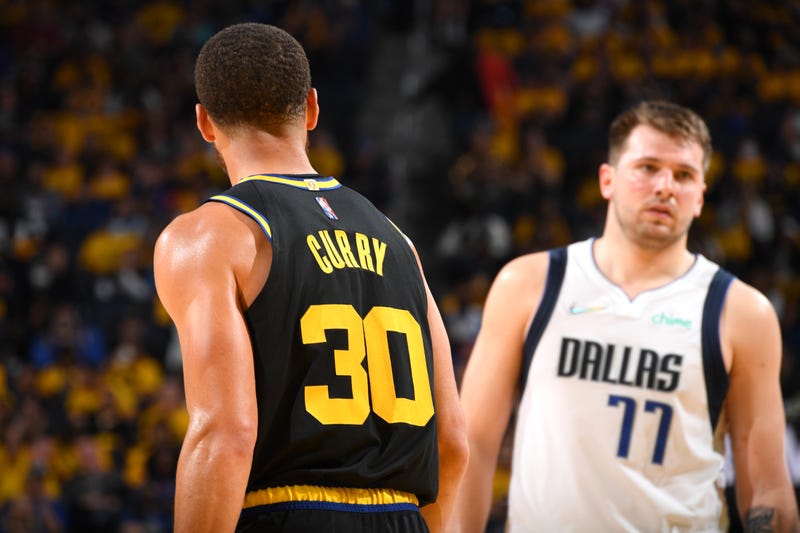 Dallas Mavericks superstar Luka Doncic has become appointment television and the center of fans' attention in the NBA playoffs this year. But the team's Western Conference Finals opponent doesn't lack prolific playmakers or star sharp-shooters. In fact, the Golden State Warriors still have one of the NBA's greatest game-wreckers, who scores from jaw-dropping distances.

Behind a strong 21-point performance from Stephen Curry and a second-half onslaught, the hometown Warriors thrashed the underdog Mavericks, 112-87, in Game 1 of the West Finals on Wednesday at Chase Center. Although Curry made only three shots from beyond the arc, he finished with a plus-minus of plus-23, and recorded a team-high 12 rebounds with four assists. And one of the signature plays came during the third quarter, when Curry drilled a three-pointer near the wing and busted out a celebratory dance.

"The way that Steph Curry completely warps a defense is insane -- he's Shaq from 30 feet away," Meadowlark Media NBA reporter Tom Haberstroh told the Reiter Than You show on Thursday. "You know how Shaq would get the ball in the paint, and you'd have no choice but to throw your entire defense at him? That's what Steph does to a defense -- but does it when he's 30 feet beyond the rim... When he's on the floor, they have a ceiling as high as any team.

"The way that Curry has a slingshot from 30 feet away, he beats the Goliaths and beats the KD's of the world. Even though they're 7-feet tall, he's got this slingshot and he takes them down. He can do something that no one else in NBA history can -- get a shot off the dribble, a shot off the pass, hit it with an efficiency that no one's ever seen before... And he improves everyone else's shooting percentages, too... He's Shaq from 30 feet away."

The Warriors, which earned the West's third seed with a 53-29 overall record, will play Game 2 against the Mavs on Friday night at Chase Center, with tipoff scheduled for 9:00 ET. According to FiveThirtyEight projections, the Warriors currently have a 62-percent chance to reach the NBA Finals and a 15-percent chance to capture their fourth championship since 2015.

The entire NBA playoffs conversation between Haberstroh and Reiter can be accessed in the audio player above.