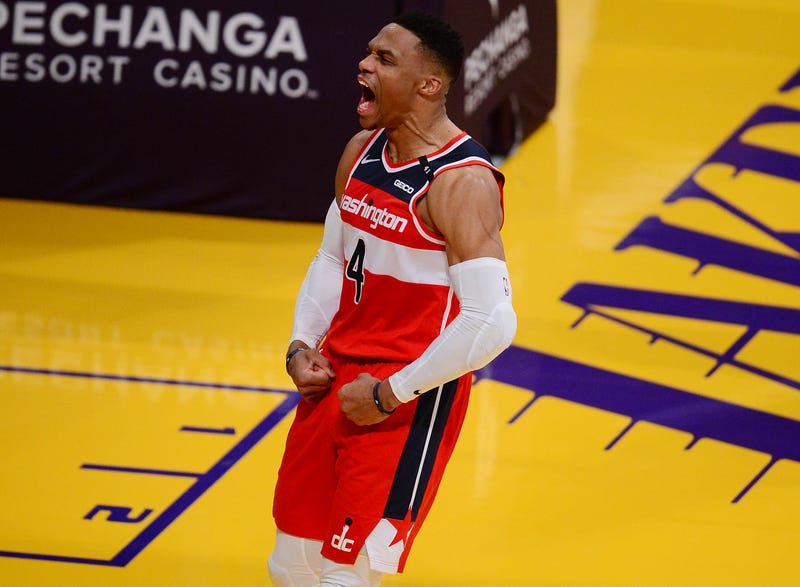 Photo credit Gary A. Vasquez / USA TODAY Sports
By Tom Hanslin and Reiter Than You

The Los Angeles Lakers began reshaping their roster days before the NBA's free agent market opened, as they acquired superstar Russell Westbrook in a blockbuster trade with the Washington Wizards last Thursday.

But does the addition of Westbrook -- the league's new triple-double king -- make the Lakers consensus favorites in the West again? And will his game complement stars LeBron James and Anthony Davis? NBC Sports NBA writer Kurt Helin isn't so convinced.

"I think it's a good regular season move. Russell Westbrook plays hard, he's intense, he will put up numbers," Helin told the Reiter Than You show on Tuesday. "He will find Trevor Ariza in the corner and get some assists. He will put up numbers. And in the games when you have to rest LeBron or Davis or they miss some time with injuries -- hopefully not, but it's certainly possible, considering their histories -- Westbrook steps in and fills some gaps.

"It's those final 16 games, you get to the playoffs. I can't help but think about Lakes versus Rockets in the bubble. What was the defensive strategy for the Lakers? Double-team [James] Harden at the circle. Don't let him start to make a play. Don't cover Westbrook, we don't need to cover him... It's a really weird fit in what's going to be a really deep West. I'm not going to rule out any team with LeBron and Davis on it, but it's a hard road to see them getting through."

Westbrook, who has two years and $91 million remaining on his contract, averaged 22.2 points with a career-high 11.7 assists and 11.5 rebounds this past season. The 32-year-old also recorded his fourth season with at least 700 assists and 700 rebounds, passing NBA legend Oscar Robertson for the most in league history.

The Lakers, which suffered a first-round playoff exit against the Phoenix Suns in June, currently have the second-best odds (+400) to win the NBA Finals next season, according to the William Hill Sportsbook.